The de la Renta licensing machine generates more than a half-billion dollars in sales each year. 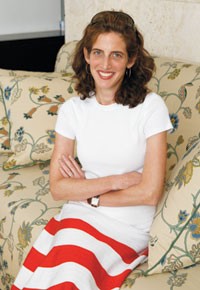 When Eliza Bolen joined the Oscar de la Renta team nearly 10 years ago, she had her work cut out for her.

Sure, she was already a member of the family as de la Renta’s stepdaughter, but she was brought on board at the company to clean up the licensing department and help it run more efficiently — a tough task, since the company had been in business for about 30 years with an array of licenses already in place.

“The company’s been doing licensing forever,” Bolen said in an interview at the Oscar de la Renta showroom here at 550 Seventh Avenue. “There just wasn’t anyone overseeing the day-to-day, so it was a bit disorganized.”

Today, licensing ratchets up to some $650 million a year in global retail sales. Her job, she said, is to make sure everything is “Oscarized.”

“I’m no expert when it comes to these products. I rely on the companies that we partner with to have the expertise. I make sure everything looks like Oscar,” Bolen explained.

Bolen said that, when she joined the company, there were about 25 licenses signed — some active, some not. Today, there are 20 well-managed licenses, with plenty of room to grow.

“I’m really open to anything. Of course, we aren’t going to do sex toys or anything because that isn’t very Oscar,” she joked. “But I’m pretty open to new opportunities.”

For now, the company’s focus remains on the strong licensing partners it has. The most recent development has been with the moderate O Oscar line, which is licensed to Kellwood Co. The line, which launched last fall, is being pulled from stores for a makeover. The firm is working with Kellwood to reposition O Oscar into the better sportswear category.

“Our partnership with Kellwood is very strong and I think we’ve done a great job on the line. We just realize that it really is better for us to be in this department,” Bolen said last week. “Those few extra cents we can spend to use some better fabric, better buttons, more embellishments, is worth it for us. And it makes more sense for us.”

Bolen said she isn’t worried about the competition in the better arena, which is populated by lines such as Lauren by Ralph Lauren, City DKNY, Calvin Klein and Michael Michael Kors.

“We are confident in the line,” she said, “and we will still price the O line slightly below most of the others.”

The new O Oscar better line will launch for spring retailing. The apparel also will be surrounded by an accessories collection to include eyewear, handbags and shoes.

Another segment of licensing for the designer is home — furniture with Century Furniture, rugs by Elson, China by Richard Ginori, bedding from Rose Tree and home textiles and wallpaper from En Casa.

“It’s been fun working outside of clothing,” Bolen said. “It’s very different, but so much fun — seeing new ways of looking at fabrics, furniture design and all of the accessories that go with it.”

Whatever the product, the licensees enjoy solid business with the brand.

“We so value the relationship we have with Oscar and it remains a very important part of our portfolio,” said Seth Morris, president of Carole Hochman, which has the license for Oscar de la Renta’s sleepwear, loungewear and robe collections. “We’ve been with them for over six years now, and the business grows consistently each year.”

Another order of business for Bolen is international expansion. As of now, only the licensees for eyewear (produced by Allure Eyewear) and sleepwear (Hochman) have global rights. Bolen said that, while those two segments are strong overseas, she said she believes home also would sell well, so she is hoping to see that happen some day soon.

“I also think O Oscar would do great overseas,” she said. “They really don’t have anything like it in Europe, so it would be really fresh for them.”

As far as future licenses are concerned, Bolen wouldn’t hint at any specific product. When asked if she would consider either costume or fine jewelry, her response was, “Maybe, but that’s a really hard business.” But, she said, it has been talked about and she isn’t ruling it out.

“We thought about doing jewelry before,” she said. “It just didn’t end up happening, but who knows. We’re in good shape right now and in the past few years, we’ve really been on a roll.”