Darker tones were making news, of course, but there were still plenty of touches of color and shine. 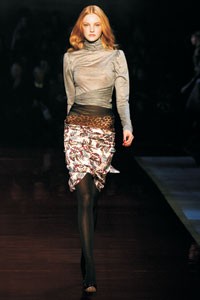 Darker tones were making news, of course, but there were still plenty of touches of color and shine.

Emanuel Ungaro: Clearly, Emanuel Ungaro’s new designer Peter Dundas is a hard worker. He was toiling for Roberto Cavalli in Milan as late as Saturday, and that he managed to send out a first collection at all is something of a feat. His Ungaro debut did, however, owe a lot to Dundas’ double life, because its overt Cavalli-fication was unmistakable. A series of promising black coats opened, from a belted full-skirted version to another glistening with gold zippers. Paying homage to the Ungaro archive, Dundas gave pencil skirts a pareo effect with the hips wrapped in layered prints. The same wrapping idea worked well with slinky jersey dresses and evening gowns that came wrapped round their waists. These were sexy in an Eighties way, without being vulgar.

What Dundas didn’t manage on his first outing, however, was to tap into Ungaro’s Parisian chic. Instead, he relied on such looks as spangled one-sleeved tops, a stiff spray-of-feathers bustier and another in anatomical croc as well as plenty of boisterous furs — including one dangling dozens of raccoon tails. While any new designer needs several seasons to set the right tone, this house has experienced such growing pains for seasons. And now Dundas’ task is more difficult than that of his predecessors. He needs not only to revive the brand, but also to give it a raison d’etre.

Celine: When an upper-tier editor and an important retail executive chat away nonstop through a fashion show, you know there’s trouble brewing for the name on the runway. But Celine is a house that has been struggling for some time, and designer Ivana Omazic has a daunting task in trying to revitalize the brand. While turnarounds don’t happen overnight, Omazic’s fall effort — only her second collection for the house — unfortunately fell short of moving things forward.

Omazic appeared to reverse the “anti-retro” policy she endorsed when first taking the reins, and this season got tangled up in her muse — Thirties style icon Nancy Cunard. The result was a collection of airy chiffon dresses, belted coats and tailored suits that swung between a dowdy redux of vintage silhouettes and overwrought, tricked-out stabs at trying to add modern-girl vitality. That’s not to say that Omazic doesn’t have what it takes to create chic, luxurious clothes. Hints of that ability peppered the collection in pieces that didn’t complicate the matter, such as a lovely little black dress with a pleated bodice that didn’t sport car-wash strips like others; gorgeously simple cashmere sweaters cut to blouse at the cuff, and a swingy, pleated silk and wool skirt. Perhaps next time, Omazic might do well to venture down a more straightforward path, since it’s these items that inspire the luxury shopper to reach for her credit card. Oh, one more thing: Please leave the crocodile for the accessories.

Cacharel: The season’s Gothic mood breezed into Cacharel, as Inacio Ribeiro and Suzanne Clements spun sober shades of gray, camel and blue into a fine collection of contemporary sportswear, with an emphasis on breezy dresses and easy knits. Its spirit may have been darker and more mysterious than in seasons past, but it remained cute and targeted a more grown-up girl with polish and sophistication. There were metallic textures — think a gold sweater paired with a pleated black skirt, and animal skins, including a leopard-print fur coat that was cinched at the waist, while prints ran from trees to a colorful circular pattern. Rivets decorated everything from the pockets of pinstripe trousers to a pleated violet silk dress with insets of gray flannel, and rounded out the designers’ balanced effort.

Leonard: Leonard has gone a touch glitter-ball for fall. Véronique Leroy’s play on the house’s archive of floral and animal prints featured plenty of the bright and splashy patterns you can always count on at Leonard. But what looked most interesting this season were muted tones that were sprinkled with disco touches. Key looks included Farrah Fawcett-style, high-waisted velvet pants paired with printed Lurex blouses, while belted dresses were dusted with sequins and rhinestones, or sprouted feather-capped sleeves. There was even a psychedelic moment in one retro, floor-sweeping gown that came dressed in a wild and wonderful butterfly print.