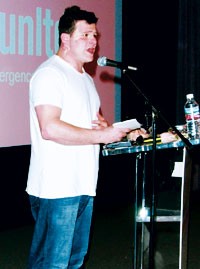 LOS ANGELES — Surfing, skating and hip-hop are so much a part of teens’ lives these days, and Op, Vans and Ecko Unlimited have ridden the wave harder than most.

Richard Baker, chief executive officer at Ocean Pacific Apparel Corp., led the revitalization of the brand when he landed there in 1997. Gary Schoenfeld joined Vans Inc. as president and ceo in 1995, with a mission to keep the cool factor of the skate-inspired brand. Seth Gerszberg is president of Ecko Unlimited, which he founded with Marc Ecko in 1993. The brand has grown to more than $350 million in just 11 years. Here are Gerszberg, Baker and Schoenfeld, the keynote speakers at last week’s WWD/DNR Apparel Summit here.

If nothing else, he has a sense of humor. Seth Gerszberg showed up dressed in a fat suit and addressed himself as “Bernard Ichabod Horatio Kramer,” “the least motivated motivational speaker in the garment industry.” Claiming to be a surfing buddy of Gerszberg, “Kramer” “spoke of Ecko Unlimited’s success and how lucky it has been in a marketplace flooded with more brands than ever.

“Brands will never get as big as Levi’s,” he said. “There are just too many other brands out there.”

He said small, high-end jeans labels — such as Chip & Pepper, Yanuk and Paper, Denim & Cloth — sit in stores where Diesel used to occupy the entire space. So, in order to survive in this business, he has set down some rules. Success will come to those…

With those points made, “Kramer” introduced his alter ego. “Now Seth will speak to you about how Ecko plans to do this,” Kramer said, shedding his fat suit.

Gerszberg spoke about his own hits and misses. “By 1997, we were bringing in $15 million in sales and we were $6 million in debt,” he said.

But now, with all his businesses in order and Ecko Unlimited’s brands on a growth spurt, Gerszberg said by 2008, each one of his brands, including Ecko Unltd., G Unit Clothing Co. and Zoo York, will bring in between $75 million and $200 million in wholesale business.

Gerszberg said while skate brands, surf brands and sport companies often assume their customers are participants in the activities for which the clothes are designed, he takes a different approach.

That’s why the company launched Complex magazine, a publication that mixes genre with culture. The company also runs its marketing approaches this way, by sponsoring motocross events, hip-hop parties and break-dancing competitions. It even created an Ecko Stadium in a football video game. Ecko Unltd. also advertises in a variety of publications ranging from Vibe and YM to Mac Addict and Dub. Next stop, Gerszberg said, will be the creation of its own line of video games, set for a 2005 release.

If one apparel company is qualified to discuss a turnaround strategy, it’s Op.

The brand itself, which once was bankrupt and now expects sales to exceed $250 million this year, and what it takes to come back from the carcass heap, were the subjects of the speech by Op’s ceo, Richard Baker.

Baker alluded to the differentiator between a brand and a label. “If we all go to a mall and buy white cargo shorts and rip out the labels, could we identify the product?” he asked.

Why kids buy boils down to what’s cool, which is no longer defined by class distinction or price. Kids aren’t dressing head-to-toe in Wal-Mart or Bloomingdale’s items, he said.

How to stay cool is keeping your product aspirational, aimed at the 18- to 21-year-old segment, as most teens and tweens dress older by five years. But, remember to differentiate your product, distribution and image within the other key age categories of 8 to 12 and 12 to 15, he said, adding that companies must re-invent every year, keeping their image fresh.

When a brand has reached a “strategic crossroads,” be it in growth, positioning or distribution, it could be time to re-brand, as long as it’s done right with a strategic plan, specific goals, due diligence and a realistic time frame, Baker said. Op, the brand founded in 1972 that generated in excess of $2 billion in sales during the late Seventies to late Eighties, dropped off the radar screen in the early Nineties. It was out-glossed by newer lines at the time, such as Hurley and Billabong.

“By 1997, it was ‘beyond uncool’ and anyone not fashion-sensible bought Op — it was a joke,” Baker said.

But there was an opportunity there with an authentic brand with high consumer recognition. Before embarking on the turnaround, a person must ask himself, “Do I have the stomach for this?” Baker said.

He did. He and his partners at the San Francisco-based investment group Doyle & Boissiere acquired Ocean Pacific Apparel Corp. from Berkeley International Capital Corp. in 1998. They decided to expand product categories, pursue a 12-month category business and bring advertising in-house, spending $20 million in two years.

Key to Op’s change was repositioning distribution so it wasn’t a mass-market bomb. It adopted a sub-branding strategy to penetrate better department and specialty stores, moderate chains and mid-tier stores.

A commitment to staying new and “dreaming with the influencers, living off the followers” were the common threads to succeeding as a teen brand, Baker said.

The 40-million-strong teen market with $94.7 billion in spending power in the United States is an opinionated force and connecting with them requires brand communication crafted with care, said Gary Schoenfeld, president and ceo of Vans Inc., during his presentation, “Connecting with Today’s Teens.” That means product attributes, brand essence and marketing execution must all coalesce, exemplified by Apple Computers and its iPod digital music player, which transcends its product function.

“Apple has done it right with the iPod, which is both an image and fashion statement. But what if IBM came out with the same product?” Schoenfeld asked. “What would it exemplify?”

Vans’ strategy for reaching teens isn’t singular. It focuses on product differentiation, catering to core skateboarders, those passionate about the lifestyle and the women’s market. Catchy advertising relies on artistic flair, Schoenfeld said, from a skater in an emptied-out pool in front of a punk-art mural to its recent black-light poster campaign. Keeping that message vertical throughout its eight Web site properties is also critical, he said.

Clearly, its strongest marketing platform has been its events, including the Vans Triple Crown Series, which has graduated from broadcasts on ESPN to NBC in the past seven years. “That really solidified our position in the market as a leader and gave us access to our core market,” Schoenfeld said.

Vans Warped Tour, the acquisition two years ago of High Cascade Snowboard Camp and sponsorship of the movie, “Dogtown and Z-Boys,” have only strengthened its mind share in the market.

Schoenfeld also told the audience that “you don’t have to do it alone,” meaning companies should pursue collaborations with other brands, albeit carefully.

“Look for companies that add dimension and depth to what you’re doing,” he advised, noting Vans’ successful shoe ventures with No Doubt and Rebecca Taylor.