The Beene Goes On – Geoffery Beene

Geoffrey Beene’s eccentricities are legendary, including the surprise that he slipped into his will: that his house would continue with his assistant, Norwegian designer Einar Holilokk, at the design helm.

Holilokk began working with his... 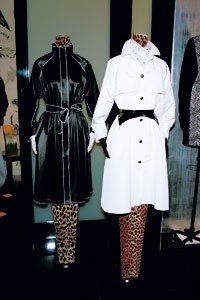 Geoffrey Beene’s eccentricities are legendary, including the surprise that he slipped into his will: that his house would continue with his assistant, Norwegian designer Einar Holilokk, at the design helm.

Holilokk began working with his mentor in 1989, left after four years, returned in 1998 and has been at the house since. “Being given this responsibility was a great compliment,” the designer said, walking among the mannequins in Beene’s 57th Street salon. He acknowledged that his collections must continue Beene’s “vocabulary, and evolve his philosophy,” but that he will inevitably give his own voice to the house.

For the past four years, Beene worked only on a made-to-order basis. While Holilokk said that he may continue with that approach indefinitely, he added, “At some point [a collection for retail] might be a good business move.” Certainly Holilokk understands Beene’s distinctive sensibility, one in which artfully conceived details are as intrinsic to a dress or coat as its shape and fabric. A long dress, for example, zipped open from the hemline to, and across, the neckline, and a high-necked black rubber raincoat was edged in white marrow stitching. Among the other top looks were a graceful, red-trimmed navy coat, the exquisite Empire gowns and the terrific printed cotton jackets.

A Geoffrey Beene collection is certainly not for everyone. These clothes aren’t designed for fashionistas who need to adorn themselves in the more obvious of labels. Hopefully, the Beene collection, under Holilokk’s direction, will maintain its equilibrium instead of starting to telegraph the latest trend. But, with time, Holilokk should be able to keep the current clientele happy and capture an even younger, quirkier crowd.