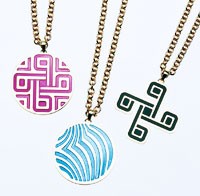 Before Mary J. Blige, BeyoncE KNOWLES anD even P. Diddy started sporting flashy jewelry in their videos and at award shows, diamonds were considered by many to be a divorcée’s best friend. Now, however, diamonds are hipper than ever, thanks to an urban-led revolution that has some staid jewelers standing up and dancing to a different beat.

Connecting with the youth culture is exactly why venerable diamond giant

M. Fabrikant & Sons chose to partner with Def Jam Records founder Russell Simmons and his wife Kimora Lee to form the Simmons Jewelry Co. “This whole youth cultural movement that is hip-hop, it’s aspirational,” Kimora Lee, the company’s creative director, told WWD in March. “I think the young people pinpoint what they want. They like the way Kimora Lee Simmons is moving around or Jay-Z or Beyoncé, and they want what [these celebrities] got.”

The Simmons’ deal with the century-old house is predicted to bring in $20 million in sales by the end of 2005 and, more important, attract a hipper customer that M. Fabrikant has yet to reach.

“If you go to a traditional jewelry store, it’s very conservative. It’s not young, not trendy. It’s not about high fashion,” said Scott Rauch, president of Simmons Jewelry Co.

“I’m kind of an over-the-top girl,” Simmons explained. “My pieces tend to be a little larger, with a little weight to them.”

Crown jewelers Garrard, meanwhile, brought in some rock royalty of their own when they signed Jade Jagger as creative director in 2001, a distinct move to attract the fashion-forward crowd. Her pistol pendants did the trick and gave the fine jeweler, which industry sources estimate had a volume of $5.4 million last year, the edge it needed to be preferred by the hip set, without alienating the loyal clientele.

“The parameters of what is considered fine jewelry are constantly widening,” Jagger said. “I love the fact that more avant-garde designs, which are a little edgier, are being made in precious stones and metals. I think it’s important that jewelry is incorporated into street style instead of being on the periphery.” Indeed, Garrard’s first ad campaign under Jagger’s direction featured rapper Missy Elliott.

Not every jeweler, however, is willing to revamp its image to attract the urban-influenced crowd. Still, old-guard houses like Graff, Van Cleef & Arpels and Harry Winston suggest that the few fashion-led pieces they carry each season do play into this trend because fashion these days is so influenced by the urban culture.

Peter Webster, partner in Roberto Coin, also admitted that the young urban customer is on the firm’s radar. “It’s not a market we’ve set ourselves out to attack,” he said, “but it’s a market we’re very much aware of. [We] keep it in mind when we’re launching new products, and putting a slant on that does cross the boundaries [of our customer base].”

This year, the Italian jewelry house included a set of diamond dog tags in its collection. Webster claimed the pieces, similar to those commonly seen on athletes and actors like Will Smith, were intended to attract interest in the brand, not to appeal to an urban customer. However, based on the strong response to the tags, more designs like them are set to be unveiled at the JCK Show in Las Vegas. Webster declined to hint at what the pieces would look like.

British jeweler Stephen Webster, best known for his sharp diamond pendants, agrees that as fashion is increasingly influenced by what people are wearing on the street, so it goes with fine jewelry.

“The urban community is instrumental in directing young people toward jewelry as an important accessory,” he explained. “You don’t just pick up the sneaker, the cap and jeans [that a celebrity’s wearing]. It’s the whole thing.” But what can be communicated in terms of style can be lost in translation when it comes to price.

“You have teenagers saying, ‘I want that ring like Pink [has].’ Well, that ring is $8,000,” he said. As such, Webster, while still finding great success with his edgy diamond and stone collection, has started to include sterling silver in his work. He hired a young designer to create a silver collection priced between $120 and $300 — “or the price of very, very expensive jeans,” he said, equating it with a purchase the customer understands.

In the end, New York-based Jacob Arabo, who worked with Faith Evans and the Notorious B.I.G. for many years in anonymity before becoming the jeweler urban fashionistas run to, said the best way to attract the urban dollar is not just through design and price, but by truly understanding the market. The jeweler, who is opening a new store on 57th Street in New York, said, “What’s different about the young hip-hop customer is their taste tends to reflect their art form and is representative of their culture.” In other words, start watching MTV.