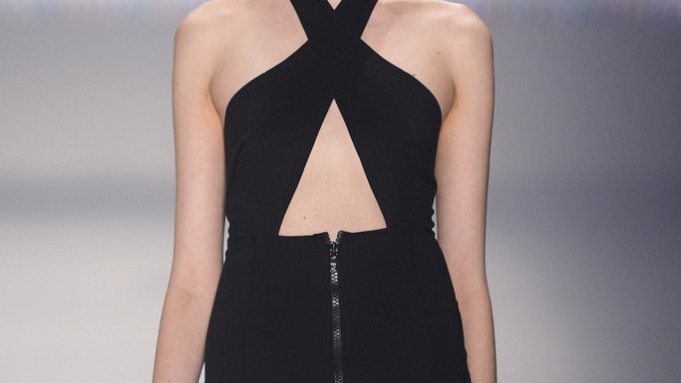 Neoprene suits, bottoms made of see-through mesh and even metal tops were among Brazil’s bikini trends that were on display during Fashion Rio’s spring 2013-2014 edition last week.

The shows, held from April 15 through 19 at Rio de Janeiro’s Gloria marina overlooking Sugar Loaf Mountain, showcased daring beachwear options by 25 designers, from veterans like Lenny Niemeyer to up-and-coming labels such as Triya.

This season, the business fair, which used to take place alongside the fashion shows, has been scheduled for May 14 to 17, so Fashion Rio was smaller. Fashion Business and Rio-à-Porter, the city’s main fashion business events, merged this year to form the new Salão Bossa Nova.

Salinas, a favorite label among younger women, strayed from its trademark bright and colorful prints to present a more elegant and sophisticated collection based on black-and-white polka dots. Inspired by Fellini’s “La Dolce Vita,” the collection had a strong Sixties flavor and brought maxi tops, high-rise bottoms and low-cut HotPants to a white runway covered in black polka dots. Sicilian lemons and white orchids against a Mediterranean blue background were among the few prints in the unusually toned-down collection. The classic Salinas demi-cup bra came in black with yellow trim, and models strutted to the sound of “Tu Vuò Fa L’Americano,” “Volare” and “Zou Bisou Bisou.” Daywear pieces, part of the Salinas Bossa line, included capri pants in gold brocade and red checkered shirts.

Blue Man was one of the few labels to present its summer collection outside the marina grounds, where large white tents were set up for the event. The brand, which took its shows to the Copacabana Palace hotel and to a 1700s aqueduct in downtown Rio in previous editions, picked the São Clemente Palace to showcase its popular bikinis. The mansion was built in late Portuguese Baroque style with sumptuous halls, crystal chandeliers and a large veranda overlooking a lush tropical garden full of orchids and bromeliads.

The venue couldn’t have been more fitting for Blue Man’s show this season, titled “Brazil’s tropical empire,’’ inspired by the transfer of the Portuguese court to Rio de Janeiro in the early 1800s as the royals fled to escape Napoleon. Blue Man mixed fruits, birds, animal prints and other typical Brazilian images with golden Baroque frames, portraits of the royal family and blue-and-white Portuguese ceramic tiles.

The overaccessorized models wore everything from tiny string bottoms and transparent mesh one-pieces to long-sleeve unitards from which parrots and jaguars seemed to jump out. The label was one of the few to include denim bikinis.

In one of the most inventive displays, Triya delivered a collection inspired by graphic artist M.C. Escher’s tessellations, visual artist Linder Sterling’s lips and roses and photographer Helmut Newton’s “Big Nudes’’ series. A model wearing a shiny metal bustier and towering silver platform heels looked like a character out of “Metropolis,” while bikini bottoms had golden metal tubes on the sides. Newton’s work inspired a one-shoulder top with a photo of breasts, and a caftan with a full-body photo print. Pink, purple and red dominated other pieces with prints of huge roses and lips.

Lenny Niemeyer used thin Neoprene as well as a thicker spandex to create structured pieces that looked like architectural designs. Minimalist as usual, she was loyal to her solid colors and earth tones and presented a collection dominated by white, black and beige. The first piece to hit the runway was a white one-piece suit with long puff sleeves. Among the few prints were a black turtleneck one-piece suit with red and yellow patterns on the front that resembled glowing flames, and a black one-piece with a discreet peplum skirt in a white and orange optical-illusion design.

“Neoprene-chic and impeccable as always,” enthused Costanza Pascolato, a fashion consultant. “It was a surprise to see Lenny’s more structured looks this season, but she managed to keep everything very sophisticated.’’

Although bikinis are the highlight of Rio’s summer fashion shows, some designers displayed daywear collections that consisted mostly of basic summer dresses, shorts and flowing skirts.

Alexandre Herchcovitch rolled out a display that could have easily been part of a winter season, with a lineup dominated by brown leather and dark denim in the shape of overalls that were reminiscent of workers’ clothes and uniforms. The designer drew inspiration this year from miners, oil workers and farmers, and from the subjects portrayed in Richard Avedon’s “In the American West” photo series.

Denim appeared in lighter shades and tie-dye washes on women’s dresses and pants with straps, and in dark raw washes for the men, giving the impression the fabric had been scorched. The slightly dirty-looking jeans, omnipresent overall straps and stained leather fit Herchcovitch’s theme perfectly, despite being an odd fit for the Brazilian summer.