Soft, billowing shapes have a charming lightness, which is winning in any season, but especially in one that puts simple, quiet looks front and center. 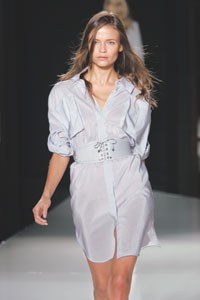 Soft, billowing shapes have a charming lightness, which is winning in any season, but especially in one that puts simple, quiet looks front and center.

Stella McCartney: The big lesson at Stella McCartney’s show on Thursday morning: Quiet clothes don’t have to be dull. That may not be a bulletin to anyone familiar with the clean sportswear favored by Seventies-era jet-set types, but McCartney’s spring collection was a refreshing reminder nonetheless. And her timing felt just right.

Opening with a simple white blazer over pale gray pants, she put the blaring soundtrack and brazen attitude on hold. Tailored pieces showed off McCartney’s Savile Row signature, while her trademark rock ‘n’ roll flou came neatened up in a paper-thin lavender shirtdress.

Calm though it was, however, McCartney’s look exuded a womanly confidence and sophisticated steam. Her classic combinations included a billowing white shirt with smart tailored shorts. Her after-dark options ranged from structured cocktail dresses to flyaway chiffons, some done up with candy-colored prints culled from paintings by Jeff Koons, who was at the show. But throughout it all, McCartney demonstrated a control and maturity that can elude young designers desperate to make big statements and conceptual clothes. She knows fashion serves a purpose beyond feeding the designer’s ego. She’s smart enough to put her customers first.

Van Noten has an idiosyncratic vision and a gorgeous sense of color — from bisque to cherry red and from deep indigo to burnt orange. Here all those elements came into perfect harmony, as seen with a pale peach slipdress dip-dyed with a streaky band of olive around its middle. Kimono jackets washed soft and worn with long walking skirts gave off an earthy elegance. Layers of neutral linens lent the collection a subtle intrigue, and oversized prints gave it all a worldly spin.

After all, Van Noten is no fair-weather bohemian hoping to liaise with the artsy set for a season, nor is he interested in trumped-up period costumes. His carefully crafted look was as believable as it was beguiling.

Givenchy: Memo to Riccardo Tisci: Please get a grip. Tisci presented himself as a designer of interest in his couture debut in July, a Goth-chic reverie he made compelling despite its irritating presentation. Yet in his first ready-to-wear effort on Wednesday, he ditched the path just started in favor of a different direction entirely, retaining only his penchant for theatricality — one that pulsed with a pretension as gigantic as the sphere obstructing much of his stark white set and his final bow.

Tisci replaced his dark divas of haute with an influx of zombie-dominatrix hybrids who moved mechanically around — and around and around — the set in dazed defiance of the audience’s own inevitable trance. Which is too bad, because, despite their whopping homage to Azzedine Alaïa, some of the clothes — mostly variations on skintight trumpet skirts — were really good, suggesting a creator who could develop his craft into a serious business.

First, however, Tisci must accept that he has a mammoth task ahead of him. After 10 years of musical designers, Givenchy has virtually no identity beyond the retro shade of Audrey Hepburn and, some would say, no real reason to exist. Tisci’s first priority — before sourcing hideous shoes and silly props — must be to discern for himself what exactly his Givenchy is to be about, and then start spelling it out clearly and concisely for the rest of us.