The Buzz Around Boston: More Gore … Clintons After Dark … Advice for Kerry …

MORE GORE: So far the prize for best party of the Democratic National Convention goes to Monday night’s bash for former Vice President Al Gore at the Via Matta restaurant on Park Plaza. Gore was relaxed and witty as friends lined up to... 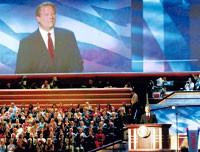 MORE GORE: So far the prize for best party of the Democratic National Convention goes to Monday night’s bash for former Vice President Al Gore at the Via Matta restaurant on Park Plaza. Gore was relaxed and witty as friends lined up to wish him well. In the gang was former President Bill Clinton, surrounded by a gaggle of admirers, including foreign policy expert Richard Holbrooke, Kerry’s leading choice for Secretary of State, who spent most of his time huddling with New York Sen. Hillary Clinton and her daughter, Chelsea.

This story first appeared in the July 28, 2004 issue of WWD. Subscribe Today.

Tipper Gore got rave reviews for the party from guest Tony Goldwyn, co-director of the Creative Coalition, who flew in Monday night. But Goldwyn said nothing about Al Gore’s floor speech Monday night. “That’s because I arrived too late to hear it,” Goldwyn admitted.

Gore gave a good-natured ribbing to Pennsylvania Gov. Ed Rendell, who was chairman of the Democratic National Committee in 2002. Teasing Rendell about his calling for Gore to concede to George W. Bush after the Supreme Court ruling in 2000, Gore quipped, “Oh, I’m sorry. I didn’t know you were so sensitive.”

Rendell took the jabs and responded, “I said I thought he should and would concede the election and, within 48 hours, that’s just what he did. In retrospect, I probably should never have said anything.”

Hollywood mogul Rob Reiner, also at the party, said, “John Kerry is aloof. He doesn’t have friends and that’s OK. He’s a leader. That’s what everyone wants. This convention is about sealing the deal for John Kerry. The question is, ‘Who would you want with you in a foxhole?’”

CLINTONS AFTER DARK: After thunderous applause and a much-photographed embrace on the Fleet Center stage, and after a pit stop at the Gore party, the Clintons retired to the Charles Hotel’s Noir restaurant, where they munched burgers and partied well past Boston’s official 1 a.m. curfew.

Political pal Vernon Jordan, Harvard University president Lawrence Summers, Connecticut Sen. Christopher Dodd and celebrities John Cusack, Glenn Close and Patti LaBelle were among the Clinton entourage. But the crowd was a bit too old for Chelsea Clinton, curls tamed and wearing an orange-and-white silk tie blouse, who moved to the back of the restaurant with main squeeze Ian Klaus and a circle of friends.

ADVICE FOR KERRY: One thing no one’s seeing much of at this year’s Democratic National Convention is fiery liberal rhetoric. As one Democratic lobbyist was overheard barking into his cell phone outside the General Motors salute to Missouri Rep. and former presidential candidate Richard Gephardt: “We have to move toward the center.”

Chairman of the Black Caucus Rep. Elijah Cummings of Maryland made the point when he huddled with former Democratic presidential candidate Howard Dean on the floor of the Fleet Center during the convention Monday night.

“I was one of his earliest supporters,” said Cummings, explaining Dean’s convention speech Tuesday night had to be scrutinized “to make sure Dean doesn’t say anything too Bush-bashing.”

So what did Dean have to say about Cummings’ jibe that the party may have gone over his speech with a fine-toothed comb? “You’re damn right,” said the fiery doctor.

Sitting in the VIP stands with the New York delegation, state Attorney General Eliot Spitzer said, “John Kerry has to lay out an affirmative agenda when he speaks to the convention Thursday night to convince the relatively small 10 percent of the voters who still remain undecided in this election. The economic argument is ours in every facet, from deficits to job creation to the impact of trade. The Democratic party is not a protectionist party, it’s pro-trade, but it has to be fair trade.”

Cathy Cox, state secretary of Georgia who is planning a bid for governor, is hoping to hear Kerry emphasize education and health care, themes she believes will mobilize Democratic women.

“We’re 54 to 55 percent of the electorate in Georgia, and that generally holds true nationwide,” she claimed. “We should have the power to elect or defeat anyone on the ballot.”

Otilia Gonzales, an attorney and delegate from Texas, mostly wanted a positive focus at the convention.

“I just want to hear more about what the Democrats are going to do,” she said. “I like the tone Kerry has taken.”

STAR TREKKING: Hours before prime-time kickoff Monday, delegates dressed in hokey red, white and blue getups swarmed throughout the Fleet Center, finding their seats and getting pictures taken with a motley assortment of minor celebrities.

“They are the trekkies of politics, sort of lovable dorks,” said Ed Helms, a comedic correspondent on Jon Stewart’s “Daily Show.”

Omarosa Manigault-Stallworth of “The Apprentice,” in town with Rock the Vote, showed up for the speeches, but had parties on her mind. “I’ve got the perfect party dress that can just be stuffed into a bag,” she said, whipping a black lace Bisou Bisou number from her Vuitton bag.

Elizabeth Teel, a delegate from South Carolina, was star-struck by Howard Dean’s and Ben Affleck’s surprise appearances at their delegate breakfast Monday at the Marriott Copley Plaza. “I can’t wait for tomorrow,” Teel said.

Affleck, speaking on a theme that Bill Clinton would echo later that night, divulged to the South Carolina crowd that the Bush tax cut had deposited $1 million in his pocket. “He asked if we thought that was fair,” Teel said with a raised eyebrow.

FEUDING WITH FOX: The feud between the Democrats and Fox News moved into high alert Monday night. First there was the moment when delegates were asked to pause for a time-exposure picture of the convention gathering. Everyone was asked to focus on the digital clock to the left of the Fox News skybox. Delegates responded by hissing and booing at the mention of the conservative cable station’s name. Later, at the party in his honor, Al Gore huddled with Howard Dean, whom he endorsed early on in the primaries. The subject the two men discussed was once again Fox News and Bill O’Reilly’s decision to run an interview with independent presidential candidate Ralph Nader during Gore’s speech at the convention.

INNER RADIUS: The New Democratic Network, a Washington-based group promoting rising party stars, hosted San Francisco Mayor Gavin Newsom, Chris Heinz, “The View” host Lisa Ling and House Democratic leader Nancy Pelosi for a brunch at Radius restaurant on Tuesday. The group noshed on frittatas, ribbed Heinz gently about his mother Teresa Heinz Kerry’s “Shove It” controversy and, befitting politicos in training, ducked outside the restaurant doors to give the TV crews a word or two. Later Tuesday, Radius was transformed into a nightclub as The Bacon Brothers — Kevin and Michael — played for the Dakota states’ delegates.