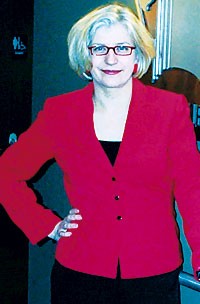 ATLANTA — How do working women dress in the real world?

WWD spoke to a handful of women — from entry-level employees to high-profile executives — about their clothing and accessories selections. Challenged by dress codes, improper fit and styling they find just plain boring, working women are less than delighted with their career clothing choices.

Wesche likes the simplicity of all black, but “to avoid looking like I’m always in mourning, I add color with jackets, scarves and accessories,” she said. She favors classic looks, and buys the occasional suit, using the jacket to top black separates.

At age 45, and a size 12, the time-starved executive is frustrated by shopping, and fashion in general.

“I pick up Vogue and see things that would look ridiculous on me,” she said. The same goes for offerings in department stores she frequents — Nordstrom, Belk’s and Hecht’s.

“I see lots that would look great on a 19-year-old, but everything for women over 30 is boring,” she said. “I wish they’d add more funky detail to basic styling, such as stitching or piping.”

Though not loyal to any brand, she wears Rena Rowan, Liz Claiborne and Jones New York, a line she described as “boring.” She cares about quality and bargains, picking up items on sale, such as a $500 Ralph Lauren jacket she got last year for $75.

While she likes skirts, they present the problem of proper hose and shoes. In her business, open-toe styles are forbidden and hosiery is required. Finding shoes to fit her wide feet is a challenge. She often wears a cute, but uncomfortable, pair of shoes to work and keeps a comfortable pair under her desk.

Amanda Brown-Olmstead, owner, ABOA, an Atlanta public relations firm, dresses according to who she sees on any given day. “With female clients, I like to dress fun and girly, but with more conservative groups, like a recent meeting with bankers in Birmingham, Ala., I always wear a suit.”

She likes to mix separates, such as a polkadot skirt by Isda & Co., with a white cashmere jacket by Agnona and shoes by Stuart Weitzman. She wears designer clothing, by Giorgio Armani, Chanel, Escada and Yves Saint Laurent, but often mixes pieces with BCBG or vintage looks. Brown-Olmstead shops at Saks Fifth Avenue, along with Atlanta specialty boutiques such as Tootsie’s and Luna. She rarely wears pants and loves to wear skirts with open-toe shoes and bare legs in the summer.

“Clothing provides confidence, security and power,” she said. “I’m at a point in life where I don’t have to pretend to be somebody else.”

Crystal Chastain, 25, attorney, Hudson Law Offices, in Columbus, Ga., says, “Work clothes stink.” The recent law-school graduate clearly prefers the casual clothing that was acceptable in school to the vague, unwritten dress code at her law firm. “I had to get an entire new wardrobe, because in law school, I had maybe one suit,” she said.

Chastain wears suits to work most of the time, “because they’re easy,” she said. She buys suits from Ann Taylor or Banana Republic, and accessorizes with blouses, shoes, scarves and jewelry from a variety of stores. A career apparel budget of $350-$450 a month helps keep her from spending money on casual clothes.

“I love shopping, but work clothes are a chore,” she said. Fit for her extremely tall, thin frame, is a challenge. “I wear small sizes, but often all they have is petite, which doesn’t fit.”

Kay Swain, 41, legal administrator at Hudson Law Offices, has the opposite fit problem. At 4 feet 11 inches, she likes the generous petite offerings at T.J. Maxx, Marshall’s, and Dillard’s. She buys when she sees something she likes, usually pants with a dressy blouse or sweater. Finding affordable size 5 shoes is difficult, as such small sizes are frequently snapped up before they go on sale.

Alison Krugman, 23, a sales associate at Katz Media Services Inc., follows a company dress code that prohibits jeans and stirrup pants. “We laughed at that one,” she said. Often an e-mail from the boss informs employees of upcoming casual Fridays, when jeans are allowed.

Krugman usually wears pants or skirts with a nice blouse, and always with high heels. “Nobody ever wears flats in our office,” said Krugman, who alternates five pairs of shoes at work. Around twice a month, she wears suits, when seeing clients.

Her budget for career wear is significantly less, on a $25,000 annual salary, than the $400 a month she spent in college on clothes for “going out,” she said.

“I, and all my friends, like to buy clothes in specialty stores that are fast and convenient, rather than department stores,” she said. “Bloomingdale’s is too expensive and I don’t like Rich’s, except for the I.N.C. brand. They don’t cater to me. It’s either younger teenager clothes or things like my mom would wear,” she said.

— G.L., with contributions from Caperton Gillett