Coast-to-coast glam becomes the ticket to the red carpet. 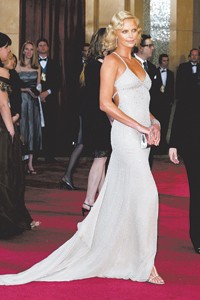 Ever since princess Grace wandered into the Gucci shop on Via Montenapoleone in Milan almost half a century ago, Hollywood has gushed over Gucci and the love affair continues to surge today.

Kelly had dropped into the Milan shop to say hello to Rodolfo Gucci — an Italian matinee idol-turned-manager of the Milan store — and his wife, Alessandra Winklehaussen, also an actress.

In what had to be one of the earliest examples of swag, Rodolfo offered Kelly a gift, according to longtime Gucci employee Franco Gittardi. Unlike today’s actresses, who not only lap up freebies but also often demand them, Kelly graciously declined the gesture.

Rodolfo, in typical Italian style, didn’t back down. He insisted that Kelly could only leave when something Gucci was in her milky hands. She eventually acquiesced and asked for a flower-print silk scarf. The shop had none.

Rodolfo didn’t stumble over his Gucci loafers, though. He gleamed a chance for a great product placement and a new product category. He immediately called costume designer and artist Vittorio Accornero and commissioned him to design an intricately colored print for the princess.

Little could Rodolfo have known that her Flora scarf would launch the Gucci apparel business, evolve into one of the brand’s most recognizable icons and inevitably help propel Frida Giannini (who resuscitated the print in 2004) from accessories director to sole creative director.

“In the early years, Gucci was old Hollywood,” said Valerie Steele, director of the Museum at FIT. “Gucci represented a glamorous brand from glamorous Italy, where movie stars vacationed and movies were made.”

Since that defining moment, Gucci has cast its red and green web across generations of the rich, the royal, the famous and the infamous. (Heidi Fleiss’ notorious black book was actually a Gucci agenda.)

From Prince Charles to Nelly, Jackie O (a bag named in her honor) to Lindsay Lohan, Gucci has straddled seemingly incongruous worlds with its balanced mix of timeless prestige and fashion heat.

Top actresses may gravitate to the Double G bag like Us magazine gravitates to the next celebrity pregnancy, but clothing — specifically drop-dead dresses and slinky suits — has become Gucci’s standing entrée into Hollywood. In particular, since Tom Ford’s breakout collection for fall 1995, celebrity stylists have had Gucci on speed dial.

“Under Ford, Gucci became postmodern. It was sexy and glam, but it was a glam in quotation marks,” Steele said. “It was OK if the [clothes] were a bit trashy and over-the-top because you could see that [style] as ironic and play into it.”

Over the decades, the Italian luxury house has scored many other blockbuster moments: Helen Hunt shed her frosty on-screen persona with a sexy powder blue satin gown at the 1998 Oscars. Charlize Theron glowed like the South African sun in a glittery sequined backless number at the same event six years later. And Faith Hill validated Frida Giannini’s first ready-to-wear collection when she donned a Forties-style black tea dress to last year’s Grammy awards.

Not exactly Grace Kelly. But Gucci’s success has always been its ability to make every star feel like a princess.