The CFDA Awards: The Nominees

See the list of this year's nominees including Marc Jacobs, Proenza Schouler and Alexander Wang. 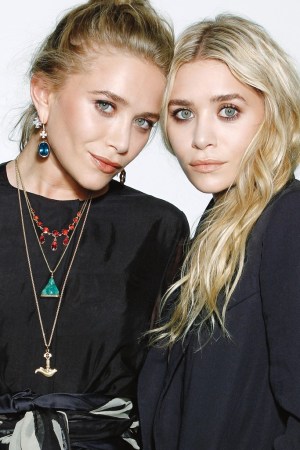 WOMENSWEAR DESIGNER OF THE YEAR

Mary-Kate and Ashley Olsen for The Row

The Olsens — initially searching for the perfect T-shirt in 2007 — now produce a complete designer sportswear collection with sunglasses and handbags. For fall, the duo took it up another notch with a presentation of discreet chic at Bemelmans Bar at The Carlyle, featuring elegant, neutral-toned coats, dresses and separates, and an ample use of fur.

What a year! In Bob Fosse mode for spring, Marc Jacobs deftly directed a sassy Daisy Buchanan through the Sixties and Eighties. For fall, his exquisite pilings were enchanting with an eccentric pilgrim spirit rife with emotion.

Ten years after Lazaro Hernandez and Jack McCollough sold their Parsons senior thesis collection to Barneys New York, they continue to surprise and energize with their chic, edgy aesthetic that’s defined by creative fabric innovation, including eelskin A-line skirts for spring and woven leather tweeds for fall. As for accessories, their PS1 bag was an instant classic that continues to evolve, and for spring, they offered a kitschy camera case bag, small leather goods and tech accessories — along with their growing shoe business.

NEXT: ACCESSORY DESIGNER OF THE YEAR >>

ACCESSORY DESIGNER OF THE YEAR

Reed Krakoff developed a distinct take on the utilitarian ideals of American sportswear for his two-year-old namesake brand. From the get-go, he extended the aesthetic into a strong accessories assortment, which ranges from handbags in exotic skins — favored by Michelle Obama — to striking architectural shoes and chic sunglasses, jewelry and watches.

Since launching his full women’s collection in 2007, Alexander Wang been a lead influence in New York’s young designer landscape. He chartered the sporty streetwear-with-an-edge look, epitomized in his recent accessories collections by a golf-bag duffel and perch trainers for spring, and his signature bags — the studded Rocco and Diego styles.

NEXT: MENSWEAR DESIGNER OF THE YEAR >>

MENSWEAR DESIGNER OF THE YEAR

Melding youthful street influences, activewear themes and sharp tailoring, Patrik Ervell is a downtown designer who has carved out a more assertive, confident vision in the past year with solidifying signatures like bomber silhouettes and abstract prints.

Billy Reid has ably become a standard-bearer of the enduring Americana trend, but he’s moved that aesthetic forward with a more elegant approach. This was driven home on his fall runway by deft tailoring and a dose of European polish, as a hand-tailored cashmere tweed three-piece suit set the tone for his new, refined direction.

Simon Spurr shocked retailers and editors alike when he resigned from his namesake label in March, after a falling-out with financial partner Judd Nydes. Spurr has garnered praise for his sophisticated British take on trim tailoring that combines respect for tradition with a keen eye for contemporary updates on the classics.

NEXT: SWAROVSKI AWARD FOR WOMENSWEAR >>

Since launching his collection in 2008, Paris-born Joseph Altuzarra has been riding from strength to strength. That journey culminated for fall with a stunning lineup inspired by Seventies Italian comic character Corto Maltese, with body-conscious silhouettes, strong outerwear and new textural plays, as well as coin embellishment, pom-pom trims and fringe.

Creatures of the Wind

Shane Gabier and Christopher Peters arrived in fashion via the road less traveled: Chicago. After meeting at the Art Institute of Chicago, where Gabier taught and Peters was a student, they launched their collection in fall 2008, instantly gaining notice for their eclectic whimsy and improbably chic take on folksiness.

Max Osterweis and Erin Beatty started Suno for spring 2008 with a print-driven collection made in Nairobi, Kenya — often in bold combinations and sporting a vintage feel. Since then, they expanded manufacturing to include New York, India and Peru, and added more sportswear, including, for fall, outerwear with men’s wear and military references, mixing stripes with florals.

NEXT: SWAROVSKI AWARD FOR MENSWEAR >>

NEXT: SWAROVSKI AWARD FOR ACCESSORY DESIGN >>

Pamela Love began producing her own tribal-inspired jewelry out of her Brooklyn apartment in 2006. She’s done runway and retail collaborations with Yigal Azrouël, Zac Posen, Marchesa, Topshop and Opening Ceremony.

Los Angeles’ Irene Neuwirth has been at the forefront of jewelry trends for the past decade with designs that are often ornate, but never ostentatious — with semiprecious stones set mostly in matte 18-karat yellow gold. Within the past year, she upped the sparkle quotient with a special diamond collection launched at Barneys New York.

Before launching her shoe collection in 2009, Tabitha Simmons was primarily a well-known stylist, working with such labels as Alexander McQueen, Dolce & Gabbana and Marchesa and regularly contributing to Vogue. Her edgy yet elegant designs, largely inspired by Simmons’ native England, have quickly gained notice in the footwear market.