The society set, veteran and emerging, are fans of the dresses and the man. 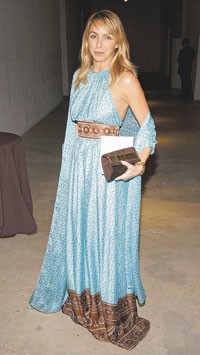 “It’s no big secret,” declared Marina Rust. “Oscar likes and understands women, and he creates clothes that are both beautiful and appropriate for their lives.”

Sure, the fact that Oscar de la Renta enjoys a large and loyal following of the world’s chicest ladies is not a government secret, but that doesn’t mean it should go unlauded.

For 40 years, de la Renta has brought his impeccable taste and joie de vivre to everything he does, whether it’s a fashion show or one of his three residences in New York, Connecticut and the Dominican Republic. That taste resonates with the customer in that “I’ll have what he’s having” way, and as a result, he’s garnered one of the most sophisticated and envied followings in the business.

For the Ladies Who Lunch, and are photographed doing so, de la Renta is a key resource. “On a big night, you always feel perfect in Oscar,” Rust said. “My favorite dress is something I wore to an ABT [American Ballet Theatre] dinner the night after [my husband] Ian and I were engaged in 1999.”

Since de la Renta’s collections rarely stray too far off the fashion path, his designs are considered a pretty safe bet. This is likely part of the reason he was asked to create a number of outfits for First Lady Laura Bush for her husband’s inauguration this year. For the daytime ceremony, she wore a white cashmere coat and a wool boucle sheath dress, and for the Inaugural Ball, she chose an ice-blue evening gown.

De la Renta’s high-powered connections exist across the pond as well. He’s developed a close friendship with Britain’s Dowager Duchess of Devonshire — he regularly visits her and stays at the Devonshire family seat of Chatsworth. The two have worked together on a garden furniture business for Century Furniture Industries.

“Oscar is a worthy successor to the old masters, like Balenciaga and Givenchy,” the duchess said. “Take, for instance, the cut, wonderful materials and colors, add originality and the rare talent of knowing what his clients feel happy wearing, and there you have Oscar and his clothes.”

In fact, like the duchess, many of de la Renta’s longtime clients were fond of the man before they became fans of his clothes. Nina Griscom met de la Renta socially nearly 25 years ago. Shortly after, she began wearing what is now a regular rotation of de la Renta suits and gowns. “I think that makes it more appealing,” she said, “to be both a personal friend and a client.”

De la Renta’s personality extends into his homes, as well. He is a legendary host, best known for treating guests to a delicious meal followed by dancing and singing at his retreat in the Dominican Republic. It appears he feels most at home there.

“I have dined in his house in the Dominican Republic and it is absolutely perfection,” Griscom said. “Every conceivable detail for personal comfort is attended to when one is a guest there. For instance, your bread, your little hot buns, are brought to you in the morning in the most impeccably woven basket, lined with the most beautiful antique linen, and they’re hot. It’s not tepid. It’s not cold, it’s hot. And I don’t know what it takes to achieve that. I certainly don’t in my own life, but I sure appreciate it when I see it.”

For years, de la Renta has maintained strong relationships with such clients as Griscom, Barbara Walters, Mercedes Bass and Mica Ertegun, but he’s recently caught the attention of the younger social set as well. In his spring 2005 collection, de la Renta sent a gumball-pink pouf of a skirt down the runway that Tinsley Mortimer quickly snatched up for the season and has since worn to more than one event.

“I try to wear as much Oscar as possible,” she said. “With his use of color in his collection, there are some pieces that are for younger women and some for older. For example, you can mix that [pink] skirt with a white tank top. I wore it a second time with a chunky necklace to a wedding in Venezuela.”

Fernanda Niven’s grandmother wore de la Renta and her mom’s wedding gown was created by the designer. These days, she’s the one sporting it around town.

“The workmanship that goes into it and the way he beads things,” Niven said, “the cutouts and the materials that he uses, are so amazing, so beautiful and so well matched. He has the ability to put it all together, and the end result is something that is so truly exquisite. For instance the tie-dyed shearling [from fall 2005] — I think it’s so cool to mix these two things and come up with something that’s really fresh.”

But it’s not just the young Park Avenue crowd among whom de la Renta has found a new following. He’s also won over the wardrobes of a number of Hollywood luminaries, including Ashley Olsen, Penelope Cruz, Chloe Sevigny, Riley Keough and Jennifer Garner. “Wearing an Oscar de la Renta dress makes any girl feel like a princess,” Keough said.

In most cases, however, it’s the stylists to the stars, not the celebrities themselves, who are choosing the dresses. Rachel Zoe Rosenzweig, who counts Garner, Lindsay Lohan and Nicole Richie among her clients, said that having a de la Renta dress in her stable is de rigueur. “It’s pretty much a standard thing,” she said. “There are five designers that I call for everything that I do, right off the bat, and Oscar’s always one of them.”

The Los Angeles-based Rosenzweig doesn’t attend too many shows during New York Fashion Week, she said, but de la Renta’s is one she wouldn’t miss. In fact, when she was sitting front row at his spring 2005 show last September, she found the white lace dress she ended up putting on Jennifer Garner just days later for the Emmys (she had to carry the dress with her on the plane back to Los Angeles).

“It was like nothing Jennifer had ever worn before,” Rosenzweig said. “I thought it was so romantic, so Grace Kelly, so Sophia Loren … I think my younger clients look to Oscar’s dresses as something timeless, classy, a little bit old Hollywood, a little bit Sarah Jessica Parker.”

Parker has been one of the designer’s biggest supporters, both onscreen and off. In an episode of “Sex and the City,” Parker’s character’s love interest, Aleksandr Petrovsky, played by Mikhail Baryshnikov, gave her a hot pink silk dress from de la Renta’s spring 2004 collection. In real life, Parker wore the same dress in green to host the New York City Ballet’s spring gala that year.

“I love Oscar because his clothes always make me aspire to being a lady,” Parker said. “When I wear them, I feel I am being transported to another time. He is indeed an extraordinary talent and a deeply kind man. In these times, an incomparable combination.”