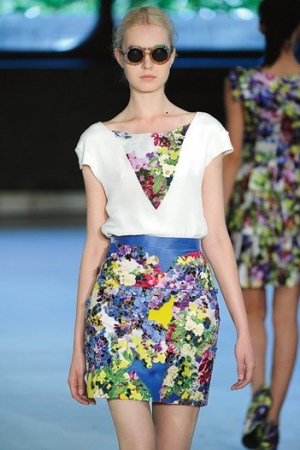 In London, where designers pride themselves on playing edgy tracks or obscure retro remixes at ear-shattering volume, it takes a brave man to entertain his audience with the dulcet notes of a glockenspiel.

Then again, Erdem Moralioglu, whose customers range from Keira Knightley to Michelle Obama and Britain’s first lady, Sarah Brown, has built a reputation on the subtle stroke—and the light touch. The 31-year-old designer—known as Erdem—chose the xylophonelike instrument, he says, because he wanted the room, the Sixties lobby of the Southbank Centre’s Queen Elizabeth Hall, to sound like a music box, with “weird” tinkering sounds. “I love live music, and a fashion show is such a fl eeting moment. You have just eight minutes to transport the audience,” he says.

The music was sweet, but in the end it was the clothes that captivated the crowd. Erdem took his inspiration from a trip to Kyoto’s Museum of Modern Art, where he discovered pictures of Japan’s modan gaaru, or modern girls: young women from the Twenties who rejected the kimono in favor of Western styles. “It got me thinking about cut-up kimonos, and about taking things apart and piecing them back together,” says the designer, whose whimsical dresses were littered with multicolored flowers. Some were embroidered onto simple shifts, while others were screen-printed onto tiered, ruffled skirts. Others still were embroidered and printed onto silhouettes. “I love the idea of not knowing where the embroidery ends and the print begins,” says Erdem, who designs the prints himself at his studio in Shoreditch in East London.

The spring collection, which also showcased tailored and layered cotton lace, fueled the already-powerful momentum of the label, which sells at stores including Neiman Marcus, Barneys New York and Saks Fifth Avenue. Joseph Boitano, group senior vice president at Saks, says Erdem “has one of the highest sell-throughs” on the store’s new designer floor. “It’s been an amazing success,” says Boitano, who calls the collections “sophisticated, fresh and feminine.”

Erin Mullaney, buying director of Browns in London, another of Erdem’s retailers, says, “His clothes have a certain other-worldly charm,” adding: “He is developing a real following for his signature floral prints, and we try to focus on the really special pieces with embroidery, lace and handmade details so that each one our customer buys is virtually one-of-a-kind.”

It didn’t take long for Erdem’s hand-embroidered collections to grab buyers’ attention. Born in Montreal to an English mother and a Turkish father, Erdem has a master’s degree in women’s wear from London’s Royal College of Art. Before launching his label in 2005, he worked for designers including Vivienne Westwood and Diane von Furstenberg. The business, he says, is self-funded and fueled by collaborations with companies such as Mackintosh, Globetrotter, Smythson and, most recently, Cutler and Gross. “I wear their glasses, so I approached them about working together,” says Erdem, describing the sunglasses collection as “weird,” and inspired by Kurt Cobain and Iris Apfel. “We’ve even managed to suspend lace in the acrylic frames.” The glasses will bow in the spring.

“I’m looking for steady, organic growth. And I’m in good shape right now, in a position where I’m growing, realizing my vision—and in control of the business.”