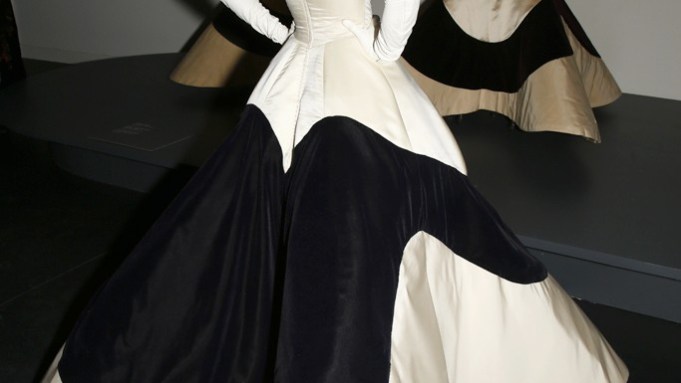 NEW YORK — If Monday morning’s living-breathing preview was any indication, this spring’s “Charles James: Beyond Fashion” at the Metropolitan Museum of Art’s Costume Institute stands to live up to its name.

Beyond the handful of iconic gowns on display, one of James’ former assistants was available to chat about his former boss; Costume Institute curator in charge Harold Koda detailed the designer’s significance today and a 1969 video showed a James-led retrospective fashion show. But what really stopped the crowd of editors was Elettra Wiedemann wearing a replica of the Clover Leaf ballgown the designer originally made for William Randolph Hearst’s wife, Austine. The remake is being used for multiple stop-animation films that are being shot by Diller Scofidio + Renfro and will be part of the exhibition when it opens to the public May 8. Before presenting Wiedemann in the replica gown, which was designed to lift when the wearer danced, Koda said, “Given the nature of a Charles James dress, it had to be moving.”

The breakfast crowd also got a glimpse of the new Anna Wintour Costume Center and the Lizzie and Jonathan Tisch Gallery (all of whom were present). Elizabeth Diller and Ricardo Scofidio, founding partners of Diller Scofidio + Renfro, were also on hand to discuss their involvement. Aerin Lauder, whose company Aerin is sponsoring the exhibition with support from Condé Nast, was also front and center.

In his opening remarks, Thomas Campbell, director of the Metropolitan Museum of Art, said that following two years of renovations — which included the exhibition galleries, research libraries and offices — the Costume Institute has been redesigned as a “black-box theater designed to morph with ease in order to bring to life the ever-expansive vision of curators Koda and Andrew Bolton. The secret to the space is flexibility, including its ability to bring all sorts of technology into play. Koda has taken to this potential like a mad scientist seeing the extraordinary possibility of showing fashion as it has never been seen before.”

Known to be one of a handful of designers who transformed fashion design, James’ talent was endorsed by Cristóbal Balenciaga and Christian Dior (who was said to have credited James with inspiring the New Look), Koda said. James’ many advancements included the spiral cut and the taxi dress (created in 1929 and so easy to wear it could be slipped on in the backseat of a taxi). He also championed strapless in the Thirties; invented the figure-eight skirt, the puffer jacket and the Pavlovian waistband that expands after a meal, and was an early proponent of licensing.

Relaying a model’s description of what it’s like to wear a Charles James dress as feeling “like a lesson in beauty. It’s teaching me how to stand and it’s telling me how to walk,” Koda continued, “In a strange way, I think that the kind of scrutiny we have applied to his work and to his life is a lesson in beauty, and he would have appreciated that young girl’s assessment.”

Afterwards, Homer Layne described working as James’ assistant for several years until his death in 1978. At that time, the designer was based in the Chelsea hotel with three sixth-floor rooms for his work space, office and apartment. While an undergrad at Pratt, Layne took a two-hour weekly class taught by James, which initially drew a standing-room-only crowd. “By the end of the semester, there were only four of us,” he said. “He was very conversational and he would go off on so many different tangents that he could be hard to follow. That probably had something to do with why our class got so small.”

Layne started working for James on nights and weekends, routinely leaving the designer’s office at midnight or 1 a.m. “He was always working. Often I would return in the morning to find the pins on the muslins had been moved around,” he said.

Layne also speculated about what James would have made of the upcoming celebration of his work. “Ultimately, he would have been pleased because he wanted the corpus of his work to be all in one place,” he said.