The Countess Says: Overstuffed? We Are!

We're so stuffed with clothes, with food, with technology — with stuff — that we're like a pumped-up helium balloon about to burst. 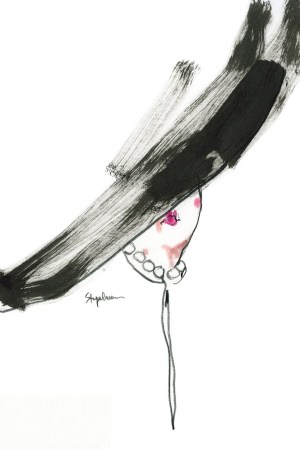 Paris is a city where one gets ideas — and not just about fashion.

In a small park close to the Hotel Bristol, one can sit for hours and watch all of life go by. Everything is immaculate. The chestnut trees are in full bloom, the smell of wildflowers permeates the air and the fountain sings its song surrounded by an audience of multicolored tulips.

People sit in the grass eating their lunch, reading books or engaging in the amour that the City of Light stirs in everyone, while the sky, when the weather is good, is a beautiful Parisian blue. The only things one hears are the Punch & Judy show, the birds tweeting and the slight drone of traffic on the Champs-Elysées, where the huge French tricolor hanging in the middle of the Arc de Triomphe waves chicly in the breeze.

The park is an understuffed paradise in a world that is overstuffed. We can’t even leave nature alone — a recent story in The New York Times said biotechnologists are trying to manipulate trees so they glow at night. Why?

It’s the perfect example of overstuffed. We’re so stuffed with clothes, with food, with technology, with stuff that we’re like a pumped-up helium balloon about to burst (of course, some have said I’ve always looked like that). We’re missing the simple joys of life.

Our closets are packed, like those of a famous French lady who has so many clothes that she’s turned all the guest rooms in her hotel particulier into closets. Guests must sleep in her husband’s bed when he isn’t there. So obviously she doesn’t have that many guests.

The fashion world is overstuffed with egos, public relations people, big shows and lavish spending. Everybody’s hyped up to the hilt to get publicity. It’s as though designers are trying to cloak the reality that they’re really only making body coverings.

But if you’re a big overstuffed teddy bear these days, you always want more. And it starts early. American parents overstuff their children with gifts, mainly made of plastic, like the electric cars boys get and then leave out in the rain to rust, or the smartphones, tablets and all the other electronic stuff they get so they can sit and text their friends rather than engage in actual conversation.

Click Here for the Previous Column by the Countess Louise J. Esterhazy >>

And nobody seems to ever get enough money. Hedge funders and bankers like Steve Cohen, Ray Dalio, Lloyd Blankfein, Eddie Lampert, Stephen Schwarzman and David Tepper are stuffed with millions and billions year after year after year, as are ceo’s of major corporations, from Les Moonves at CBS and Robert Iger at Walt Disney to HCA’s Richard Bracken and Oracle’s Larry Ellison. Seriously, what do they do with it all? How many houses, boats, planes, cars and other stuff do they need?

Even the money isn’t enough — they want to get their names in the papers or have their photographs taken by giving to charity to boost their egos (and maybe ease their consciences). Not a day goes by that Warren Buffett doesn’t have his name in the paper — and now he’s even tweeting, which means he’ll be everywhere.

There are those who do good without seeking publicity, like Bill and Melinda Gates, who are quietly and effectively seeking to eradicate malaria and polio — and convincing fellow billionaires like Buffett to leave all their money to charity when they die. The Gateses, even worth more than $60 billion, are understuffed in this overstuffed world.

There are others, like David Beckham. Yes, he of “Bend It Like Beckham.” On the eve of announcing his retirement, he was sitting in the restaurant of the Bristol one afternoon. I noticed a handsome man sitting at another table with a little girl. He was dressed all in gray, with a gray stocking cap and what looked like a gray sweater with patterns on the sleeves. Then I realized those weren’t sleeves — they were his arms, which were covered in gray tattoos.

Hardly anyone acknowledged him as he ate spaghetti with a glass of Coke, and he didn’t even glance at the soccer game playing on the TV near him. He was totally understuffed. He kept looking over at me until he and his daughter rose and began walking toward me. I felt my heart go pitter-patter and my face flush. (I’m of a certain age, but I’m not that old.) He said hello in an East End accent and then leaned over closer to me — to pet my dear friend Tulip, my shih tzu. His four-year-old daughter did the same.

Thank goodness for Tulip. I have my share of overstuffdom, but she keeps me grounded. And I’m not the only one. Even world leaders admire her: French President François Hollande must take walks to relax in the little park, with no security, near the Elysées Palace because one day Tulip was there and he stopped to pat her and spoke with her in French. Overnight she became a star at the hotel because the President of the French Republic took time to pet her. It hasn’t gone to her head one bit. They obviously weren’t frightened of Tulip.

I’m striving to follow her example, even down to my diet. Ever since I was growing up at the family schloss high in the Austrian Alps, I’ve loved my share of Sacher torte, Wiener schnitzel and bramborak. But in my strive to be less stuffed in all things I’ve gone vegetarian (well, sort of). As David Beckham walked over to me, I was indulging in the most delicious lunch of sweet carrot juice and a vegetarian club sandwich with tomato, avocado and eggplant with special homemade mayonnaise, spiced with herbs and parsley. It’s delicious — and I might even lose weight. No wonder the great chef Joël Robuchon is planning to open a chain of vegetarian restaurants in India.

So that’s my diet du jour in trying to be less overstuffed. Now I’m off back to the park to smell the wildflowers.