The Crown Jewel of American Retail

With solid brand recognition and a dedicated base of consumers who avidly collect the pieces, the American designer has helped create the language of jewelry...

By Sophia Chabbott on May 2, 2005
View Slideshow 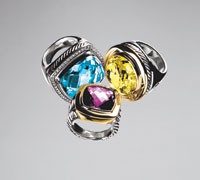 With solid brand recognition and a dedicated base of consumers who avidly collect the pieces, the American designer has helped create the language of jewelry dressing in the U.S.

When he started in 1980, Yurman made waves in the industry by bringing sterling silver into the fine jewelry arena by adding gemstones to his pieces. As such, he brought affordability into the sector, which enabled him to reach an audience fine jewelers hadn’t catered to before: the self-purchaser and the everyday wearer.

“It’s become the most successful jewelry company we do business with,” said Mark and Candy Udell, owners of London Jewelers. “It reaches across age limits and ethnicities, from teenagers to young adults, mothers and grandmothers. It’s also great everyday jewelry; it goes from morning to evening.”

The company’s wholesale division accounts for 90 percent of the Yurman empire, with its own stores accounting for the remainder.

The product is in 350 doors and is growing in a healthy manner, according to Carol Pennelli, senior vice president of sales and education for the firm, although it is not actively seeking to break additional accounts in North America.

“Actually, we are reviewing current distribution to make sure it’s the appropriate presentation,” said Pennelli.

Instead, the firm is looking into expansion in Europe and Asia, where it has no presence.

“Judging by the traffic at our booth at Basel, there is high demand for it [outside the U.S.] and because of the diversity of the [advertising] campaign it reaches so many people,” said Pennelli.

The company partakes in three of the five jewelry trade shows each year, kicking off the season at the International Watch & Jewelry Fair in Basel, Switzerland, then going to Couture and JCK in Las Vegas.

“It’s an important component for us to meet with our accounts five times a year,” she said. “It keeps us on the pulse of what’s happening.”

The firm holds gatherings in showrooms to premiere pieces in New York during the JA jewelry trade show in July, as it doesn’t take part in the show.

The jewelry collections are diverse and range from the silver and gold Thoroughbred collection — the core of the business that was introduced in 1983 — to the Silver Ice line of silver jewelry with diamond accents that launched in 1994. Both collections feature signature cable detail and faceted semiprecious stones in the brand’s characteristic bright colors, like amethyst, aquamarine and citrine.

The men’s jewelry division, led by Yurman’s son, Evan, includes logo and enamel rings, brightly colored cufflinks with signature cable carved into stones such as carnelian, and rose quartz with a gold band wrapping it. The line has recently become edgier, with the help and influence of Evan, who brought a younger spirit to the brand. At Baselworld in April, the collection included a black titanium bullet-shell necklace and horn pendant of black titanium.

The Yurmans ventured into the watch business when David’s wife, Sybil, complained she couldn’t find one that looked appropriate with her chunky silver helix bracelets, and so in 1994 the Cable watch collection was born. It was followed by the Thoroughbred watch collection for women and men, a cushion-shaped dial with signature cable detailing at the side of the case. The Madison collection came next, with a long oval-shaped case available with diamonds and in many versions.

Yurman also has a limited-edition line of one-of-a-kind pieces of jewelry that are only available at the designer’s five boutiques throughout the country. This is where Yurman expresses his artistic values in high-end and beaded jewelry. Retail prices for this collection can go up to $100,000.

The company has also in the past few months softly launched a bridal collection in its boutiques. It consists of engagement rings with intricate cable details as prongs for a central diamond.

The South Sea pearl category was introduced in 2004, and that and gold items are fueling the growth of the business, according to Pennelli. Tahitian, Freshwater and cultured varieties are also offered.

Retailers said the secret to the success of David Yurman is threefold. The jewelry has an air of casual elegance not seen before from other vendors, its affordability lends itself to self-purchase and it’s ripe for collecting and gifting, with coordinating classic and limited-edition pieces.

“People build a wardrobe of David Yurman,” said Ron Frasch, Saks Fifth Avenue’s vice chairman and chief merchandising officer. “No one else has quite that special a brand.”

Marc Fink, president and chief executive officer of Fink’s Jewelers, whose 14 locations throughout Virginia and North Carolina give David Yurman jewelry extensive real estate, said, “David Yurman touched a chord with the casual nature of our lifestyle and created the perfect product for self-purchasing women. It’s an eight-figure business for us.”

Fink has seen customers buy up to 19 pieces on a given shopping excursion and said his Yurman business is approximately 50 percent self purchase.

“It’s special and wearable from blue jeans to getting dressed up,” said Claudia Canerdy, owner of the Martha’s Vineyard boutique of the same name, who was the first retailer to carry the brand.

It isn’t uncommon to see people coming to the David Yurman counter to add another bracelet to their collection or for a mother to start her daughter off on a collection of her own. There is a children’s line as well called Cable Kids.

“Clients like the fact that they can wardrobe their fine jewelry by adding new pieces at any time that will integrate seamlessly with what they already own,” said Hank B. Siegel, president of Hamilton Jewelers, which sells Yurman in all its five doors along the East Coast.

But the company is not without its critics. Some say the collection is too vast and needs editing. And with an exploding business, it’s been said that the company hasn’t always been able to keep up with orders.

“We do have a vast line and we have edited,” said David. “The reason we have such a large line is because so many pieces from 1987 to 1999 continue to sell and I’m not going to stop making a good seller.” The company has also retired 240 pieces in the past six weeks.

David acknowledged that because of the huge growth their company experienced in 2004, they were late on deliveries. “Last year was horrible for us,” David said. “We didn’t forecast that we would do that much business. We did 50 percent more business than the year before.”

Within the past few months, the company has found ways to combat shipping delays. They have installed a new system based on that of Tiffany’s to keep track of how much product they will need to fill orders and have built up an inventory that comprises 80 percent of the collection.

David and his wife, Sybil, who is also company president, keep a close eye on retailers and are known for their forthrightness and persistence in maintaining the brand’s identity and differentiation. In the past they have insisted upon the best location on the floor within the department, specialty and guild store accounts, often to the chagrin of retailers. They have been criticized by some of being too dictatorial and often finicky with their wholesale accounts, telling buyers what to buy and precisely how to merchandise it. As a result, they’ve lost some accounts.

There are times when the company will give a retailer a bit of leeway and let it continue with its method of selling the jewelry, but if it isn’t successful, Yurman has been known to drop the account.

“We don’t want this stuff all thrown around and disrespected [on the selling floor],” said David.

But it’s also this persistence that has helped this operation to thrive.

“Make no mistake,” said Lisa Kazor, senior vice president and general merchandise manager of precious and designer jewelry for Neiman Marcus. “The success of the [David Yurman] business is the result of their involvement, commitment and creativity — artistic sensibility still matters to the Yurmans.”

Others like John Hardy, Michael Dawkins and Judith Ripka have successfully followed suit in the fine silver jewelry category, but haven’t achieved the same cult following or brand recognition as Yurman.

“There is a terrific collaboration with a brilliant husband-and-wife team,” said Fink. “Sybil is a marketing genius and David is the creative genius.”