What do you get when you cross a designer with a celebrity? This year saw the answer. 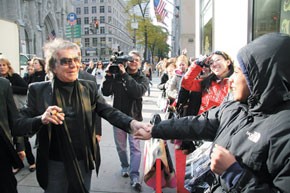 What do you get when you cross a designer with a celebrity? This year saw the answer.

“I got Roberto’s cigar!” a young woman shouted during Roberto Cavalli’s appearance in New York to launch his line for Hennes & Mauritz in November. “It fell down when he stood here. I waited until he walked away, then picked it up and put it in a plastic Ziploc bag. I’m going to sell it on eBay. It’s open to all bidders.”

View the full coverage of  WWD Year in Fashion 2007 at www.wwd.com/yearfashion07 When a designer’s cigar butt is as desirable as some of his clothes, you know that strange times have taken hold of the industry. More so than ever, 2007 was the year that all lines blurred between designers and celebrities, with a continued crossover between the two, at all price levels. While some designers like Cavalli and Vera Wang were treated like movie stars at their lower-priced launches, every celebrity worth his or her salt, from Madonna to Victoria Beckham, has taken a stab at designing clothes. If anything, all the activity furthered the notion of the “massification” of fashion, with exclusive designer names available at accessible prices and well-known Hollywood names leaving their mark on department store fixtures.

“It’s all happening because there is too much going on in fashion,” said David Wolfe, a creative director at the Doneger Group. “The consumer is desperate for some guidance to sort out the crowded retail landscape. Because the media tells us so much about celebrities, people have an idea of what their image means in terms of fashion, and if they can connect a name to an image and merchandise, it makes shopping so much easier.”

Here are just some of the big names attached to deals that happened this year:

-Paris Hilton — who later in the year was arrested and jailed in a lengthy soap opera — kicked things off with the news of contemporary sportswear and lingerie lines, slated for a fall retail launch. The sportswear is licensed to BBC Apparel Group Inc., and the lingerie is licensed to SBH Intimates Inc. and includes mesh baby-doll nighties, corsets, panties and bras.

-Jennifer Lopez also widened her reach in January when she unveiled designs for a junior clothing line called justsweet, which complements the contemporary Sweetface line and replaced JLO by Jennifer Lopez at retail. Lopez showcased the designs during New York Fashion Week in September.

-In February, Victoria “Posh Spice” Beckham lifted the veil on her lifestyle empire with dVb, starting off with a line of sunglasses, which was followed in May with a collection of slim-cut denim pants. September saw the launch in the U.S. of fragrances with her husband, soccer star David Beckham. The jeans, from $285 to $325 at suggested retail, featured details such as contrast stitching, colored zippers and purple pocket linings, while the sunglasses, which sell at a suggested price of $280 on average, were mostly oversize. By the end of the year, Posh would be back onstage in a different way, via a Spice Girls reunion tour.

-In March, H&M launched the M by Madonna line, her first full collection for the retailer after designing a capsule line of tracksuits in 2006. The collection featured everything from kimono-style dresses, tailored jackets and knee-length hipster shorts to accessories such as lace-up boots, skinny leather belts and sunglasses. The one-season collection was available in H&M stores in 26 countries. (There has even been talk of Madonna launching a fragrance, though that would not be with H&M.) That same month, the Swedish retail chain also tapped Kylie Minogue as the muse of a new beachwear line called H&M Loves Kylie.

-Retail chain Steve & Barry’s took a bite out of the celebrity designer field when it unveiled a deal with Sarah Jessica Parker in March. The line, called Bitten and inspired by Parker’s personal closet, launched at the chain’s 200-plus stores in June, offering apparel, swimwear, costume jewelry, handbags, belts, sunglasses and shoes at $19.98 or less. In May, the Port Washington, N.Y.-based chain disclosed its deal with actress Amanda Bynes for an apparel and accessories collection called Dear, which launched in August. Like Bitten, pieces sold for $19.98 or less.

-In April, Gap unveiled the Gap Design Editions, featuring a collection by Doo-Ri Chung, Thakoon Panichgul and Rodarte’s Kate and Laura Mulleavy. The four emerging designers offered their take on Gap’s classic white shirt, which retailed in select Gap stores for $68 to $88. The limited edition project was an offshoot of Gap’s partnership with the CFDA/Vogue Fashion Fund, and came with a marketing initiative that included a striking black-and-white print and outdoor advertising campaign shot by Inez van Lamsweerde and Vinoodh Matadin and featuring the designers with Stella Tennant, Liya Kebede and Carmen Kass. The shirts were also featured on Vogue’s May cover.

-British chain Topshop jumped on the celeb bandwagon in May when a long-term collection designed by Kate Moss hit its stores in the U.K. and was greeted by a mob scene of fans and fashion lovers. The Kate Moss for Topshop collection is inspired by the model’s personal wardrobe, with such pieces as racer-back minidresses, cotton tank tops in Crayola colors and denim HotPants. The collection was also sold at Collette in Paris, Corso Como in Milan and Barneys New York, bringing Moss’ design sensibility to each fashion capital.

-Vera Wang entered the moderate market with the Very Vera lifestyle brand, which is exclusive to Kohl’s and hit the retailer’s nearly 1,000 doors in the first week of September. It featured such looks as a brocade car coat for $138 at retail and a silky dress for $128, while the lion’s share of the line is available for $30 to $70.

-That same month, Mary-Kate and Ashley Olsen unveiled Elizabeth and James, a contemporary sportswear line named after the Olsens’ younger sister, Elizabeth, and older brother, James. The partnership with L’Koral Industries launched at stores including Bergdorf Goodman, Neiman Marcus and Intermix for fall.

-Cavalli unveiled the designs for his H&M guest gig in November. In typical Cavalli manner, the 40-piece line was glamorous and festive with animal prints, Lurex, ink-blue denim, fake fur and metallic accents. It was available at 200 H&M stores worldwide, including 10 in the U.S., with prices from $59 to $198, and supported by an advertising campaign that Terry Richardson photographed.

-Throughout 2007, Target continued on its quest to bring fashion to the masses, offering collections by Proenza Schouler, Patrick Robinson, Libertine and Erin Fetherston under its Go International initiative. Each collaboration included heavy TV and print advertising, which helped raise the designers’ profiles in markets their upscale runway clothes wouldn’t necessarily reach.

“It’s a reality that’s not going away, but it runs the risk of having some backlash if there is too much,” Robert Burke, founder of fashion consultancy Robert Burke Associates, said of the “delebrity” phenomenon. “The consumer wants to know that there is some authenticity to the collaborations. If it’s not authentic and not genuine, the consumer can sense that and it will not be popular.”

Burke said these celebrity lines are appealing because turning an unknown name into a brand can be a lengthy and expensive prospect. “Introducing a celebrity collaboration can offer a much faster growth and a wider range of distribution,” he noted. On the flip side, he added, guest collaborations like Karl Lagerfeld or Cavalli at H&M can help the designer gain recognition and visibility.

“It often boosts sales in their fragrance or other classifications because of this name recognition,” Burke said. “Cavalli probably got $20 million-plus in marketing exposure and he got it on someone else’s budget.”

Michael Fink, vice president and women’s fashion director at Saks Fifth Avenue, said, “This idea of fashion for the mainstream is intriguing. I love the concept that current fashion deals are reaching a part of the public it used to take seasons to filter down to.”

As for celebrity lines, Fink said at a retailer like Saks, it is irrelevant whether the designer is a celebrity or not as long as the product is well-made and addresses a missing niche in a woman’s wardrobe. And that trend could soon run out of steam.

“How many celebrities are left that are not the new blonde of the day?” he said, laughing. “I think we are running out of celebrities. Too many are interchangeable.”