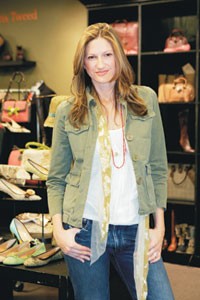 NEW YORK — J. Crew’s current bestseller is a pair of jeweled sandals for $190.

“One-hundred and ninety dollars,” gushed Jenna Lyons, the retailer’s senior vice president of women’s design, throwing her hands in the air for emphasis. “We never would have given the real estate to a $200 sandal before. The customer has been ready for it, but J. Crew just hasn’t been there for her. We didn’t know if we could sell it. And that is what’s been great about Mickey [Drexler, J. Crew’s chairman and chief executive officer]. He’s been pushing us to push the envelope.”

After Drexler joined the company from Gap Inc. in 2003, he and president Jeff Pfeifle, whom he brought along, wasted no time in injecting the brand with a new sense of luxury and cool. For the last three seasons, J. Crew noticeably has been updating its collections and improving its colors, the quality of its fabrics, the design and overall fit. While the company isn’t walking away from American classics such as chinos, button-down shirts and ribbon belts, it has started to pepper select boutiques with luxurious items. These days, a customer passing J. Crew’s thresholds is as likely to find tailored cashmere coats and suits, intricately embroidered pants and heavily beaded tops as the classics.

“The product definitely needed to be fixed,” Pfeifle said. “There were inconsistencies in color and in direction. The brand has been in a lot of different places.”

Where some incoming executives would have come in with an ax and cleared out the existing design team, Drexler relied on Lyons, a J. Crew veteran who has been with the brand for 15 years, to oversee the design makeover.

Lyons is a downtown type who appears a little disheveled, but in a studied way. She mixes and matches new pieces with vintage ones that are a little frayed around the edges. On this day, for instance, she wears torn faded jeans adorned with pins she must have used while tweaking a sample. In many ways, she is the perfect incarnation of the J. Crew woman for whom she designs.

“I like things that get better with age,” she said. “We have always focused on something that is going to look good even after you have had it a little bit. Maybe it is frayed a little on the edges, maybe it is starting to wash down a little too much. I actually think that that looks good. That, to me, is classic.”

Lyons joined J. Crew’s women’s design department as an assistant after studying at Parsons School of Design and interning at Donna Karan. At J. Crew, she worked closely with original founder and then-president Emily Woods, and in her years at the company worked in several different departments, learning about accessories, apparel and denim. That, she said, is very helpful now that she oversees the design of all women’s products.

“The company had been more merchandising-driven over the past few years,” she said. “Now, it is the complete opposite. Design is really where everything starts, and that’s what we go back to when we talk about the floor, the colors for the walls. It all goes back to the original inspiration as opposed to it being a directive of the merchandising side.

“If you look at prior management, we were always thinking cheap and deep,” she continued. “Mickey really pushed for quality and not just quality of design, but also the quality of how the customer experiences the catalogue, the way you experience the stores, what kind of sales people there are or what the sales people are wearing. On every level, he was pushing the quality angle.”

To that end, the designer was given more upscale resources to work with, from Italian and Scottish mills and print specialists to Indian beading experts. These days, J. Crew makes no secret of the fact that cashmeres and wools originate at Loro Piana, prints are developed by Ratti and beading is done by hand by Shameeza.

“The sense of humor is still there,” Lyons said. “It’s about being straightforward and unique and not label-driven. It’s always been a little bit of a quirk to a classic idea, whether it’s a fun lining on the inside, a bright color, a cargo in hot pink or bright yellow. I don’t think of it as preppy, per se, but classic.”

The renewed focus on quality and design also extends to J. Crew’s men’s wear. Todd Snyder, vice president of men’s design, joined the company a year and a half ago from Old Navy. He started his career at J. Crew 12 years ago, but left to work at Ralph Lauren before joining Old Navy. Snyder updated J. Crew’s suits with Loro Piana wools and real Harris tweeds. From a design point of view, he lifted the armhole, narrowed the sleeve-head and slimmed the waist for a modern silhouette. “No one is going after that thirtysomething customer with something that’s a little more sophisticated, but not too serious,” he said.

“Some of the price points have gone up, but the value has gone up, too,” he noted. “For example, we had a $1,500 shearling coat in men’s for holiday. A customer walks into J. Crew and sees that $1,500 and thinks that the prices have gone up. They haven’t, but we now have some items that are more expensive. That shearling sold out in no time.”

But with all the new categories and the more rounded collections, is there a worry that stores will become overmerchandised? Part of the new strategy was to increase the product flow in stores, and new merchandise hits the floors on a monthly basis.

“Something we talk about all the time is how to flow,” Lyons said. “Mickey is very strategic about that in terms of making sure the stores aren’t overcrowded. We have a huge benefit, having online and catalogue. Online, there’s endless real estate.”

There are no immediate plans to extend into new categories. Instead, the focus is on strengthening existing ones. Pfeifle said shoes and accessories have particular growth potential, along with women’s and men’s wear and bridal. “The category that has blown us all away is wedding,” Lyons said. “That, we’re realizing, is a huge growth opportunity for us. We’ve barely scratched the surface in terms of what it can be. We know that we’re servicing our customer and giving them something that they haven’t been able to find before. They need something more approachable, something a little more casual.”

Since its launch in 2003, the bridal collection featured bridesmaid and bridal dresses such as the Vivian strapless duchess satin gown, for $498 retail, and the Sophia silk tricotine dress, which is available short for $180 and long for $260. So far, the line was only available online and in the catalogue, but its success has prompted the company to launch “J. Crew Wedding,” a bridal-only catalogue that will hit homes around April 16. The catalogue will showcase fashion ideas for the bride, groom, bridesmaids and wedding guests, including accessories such as shoes and bags for women and bow ties and ties for men. The catalogue also will profile J. Crew’s wedding coordinators, whom consumers can call for help. On April 16, J. Crew also will host trunk shows of the entire bridal collection in its boutiques in Rockefeller Center here and on North Michigan Avenue in Chicago.

Pfeifle added, “There’s a lot of different places to go. In the short term, we’re really focused on continuing to go in the direction we’ve been going in. We need to focus on our customers, what they’re asking for and what they want. We have 157 retail stores. We have 42 factory stores. We will be opening some stores going forward. Global is an opportunity, but for now, we’re thinking here.”