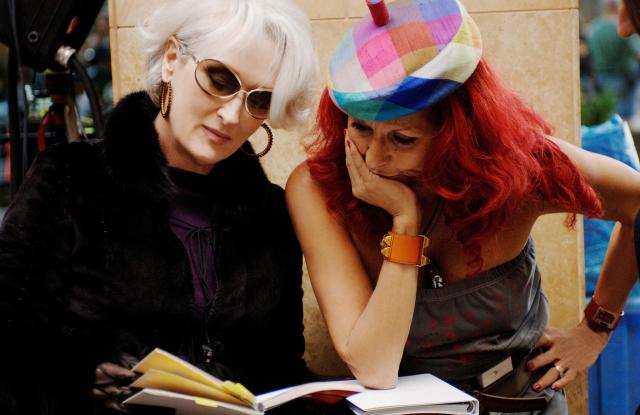 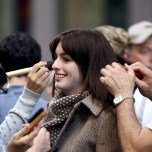 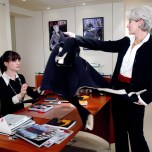 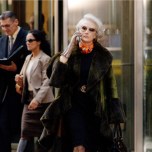 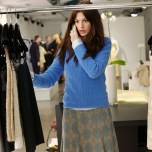 This June marks the tenth anniversary of the release of one of the most discussed and successful fashion films in recent memory, “The Devil Wears Prada.” The woman behind the clothes that made the movie the blockbuster it was, Patricia Field, was subsequently nominated for an Oscar and adds the film to her lengthy “Sex and the City” résumé.

Field, 75, currently works on TV Land’s “Younger.” She chatted with WWD about all that’s changed in the industry since “Prada” was released — and, for good measure, what it was like dressing Meryl.

WWD: Could you tell us a bit about how you approached costuming the film?

Patricia Field: There’s a general way that I approach costuming, because there’s a certain constant of these projects. It starts with the script. Unlike fashion, films are a narrative, it’s about storytelling. I guess I do the more fashion-themed projects because that’s what my reputation is, which is fine, because I love to tell stories with fashion — that’s what I do, as opposed to a cop show. It all starts with the script because in the script you find the characters, and with the characters you find that there are storylines there. You start to understand their personalities and all the different aspects of the character. After I get some idea of this fictitious character that we’re creating, then there’s the casting. I’d never worked with Meryl Streep before, it was definitely a perk for me. I sat down with her and started our relationship, found out what her opinions were, what she liked, what fit her well. I believe my job is to support the actor who creates this character in front of the camera.

WWD: What was the process of working with Meryl Streep like?

P.F.: Obviously this script started out as a book, and it was about Anna Wintour, but it was important for me to take it to another level. Not that I have anything against Anna Wintour; I think she’s incredibly evolved in her field, but it was about creating for the viewing audience what a chief editor is about. And I discussed all that with Meryl and she agreed with me. And so in choosing her wardrobe my idea was that she’s a chief fashion editor, she has her own style. It’s not some other editor’s style that I’m copying. We’re creating an original character. And so of course you have to know the person, the body, what they like. When it came to Meryl, I thought about Donna Karan for her, but Donna Karan archive. I went to her archives in New Jersey and went through these racks from the Eighties and the Nineties.

WWD: What, in your opinion, is important about the intersection between fashion and film?

P.F.: Based on my experience, which of course includes “Devil Wears Prada,” I believe that TV and film have been in a way a new vehicle for fashion. With “Devil Wears Prada,” obviously the story is about a chief fashion editor, so the setting is fashion. But it gives me the palette to apply my fashion style to the story. The story is important because that’s the first step, what it’s all about. A really important point is that fashion and style, which is how you put it together, has become accessible on TV and in film. It’s moved into the consumer so to speak. Particularly now because of the Internet and social media and so on; it brings fashion and style closer to the consumer. It’s a changing world, and fashion is being definitely affected by it. It’s one of the animals on Noah’s Ark, so to speak — Noah’s Ark being the whole Internet world.

WWD: What do you make of the influx of technology’s relation to fashion in the past ten years?

P.F.: One of the things that I believe is holding the fashion industry back, aside from the social media thing, is that film and TV are adaptable to the Internet, because it’s media. But clothing is material, it’s tangible. And I feel that the fashion industry at this point, on a practical basis, is being impeded on. They have to figure out a way to get past the Industrial Revolution and move forward in time. The Industrial Revolution is finished, we are in a new age, and the fashion world, to stay relevant, has to adapt. Now of course they can stay relevant by displaying their fashion on the social media, but they have to adapt by creating fashion that is accessible to millions of people. It’s not aristocratic. I think America is in the best position because, after all, if you go around the world what you see everywhere is everybody wears the same thing: jeans, sneakers, T-shirts. That’s American. What we put out is a reflection of our zeitgeist. They may make it in China, but they’re American ideas.