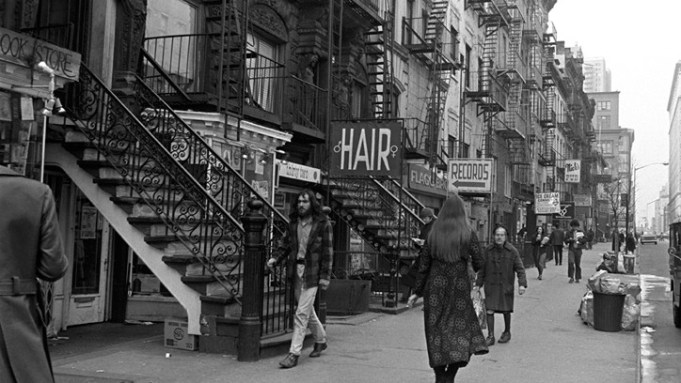 A Manhattan neighborhood can go from outré to everyday in a New York minute. It happened to the Meatpacking District and Hell’s Kitchen, and in 1972 it started happening to the East Village. Though some promises of the day (like the opening of the Second Avenue subway by 1977) never materialized, the area definitely experienced some growing pains. WWD’s reporters were there to watch it happen.

Today, gentrification is one of the longest four-letter words in the book. But in the Seventies, people approached the “revitalization” of the East Village as an opportunity to make the community their own. Store owners had long complained of losing money as they were forced to close stores earlier and earlier due to crime. “As soon as it gets dark, there’s no one around,” said Bruce Conley of East River Leathers. “People are afraid.” So on Ninth Street between First and Second avenues, a group of local merchants embraced the idea of welcoming a new, richer clientele. Slowly, they began to set themselves apart as an example of the “new” East Village. “There’s a lot of chic here,” said Beverly Miller, who ran two shops on the strip. But, still putting community first, store owners wanted to avoid the “knickknacks and tchotchkes” image of their retail counterparts in popular Greenwich Village. “We don’t want that crafty feeling,” she added.

Hip shops weren’t the only things popping up. The NYPD applied some creative techniques that included a “stop, walk and talk” initiative aimed at restoring neighborhood confidence in the police force, and established a methadone treatment and support program. And though many lamented the closing of legendary entertainment fixtures like the Electric Circus and the Fillmore, their absence (or more importantly, the absence of their patrons) changed the village a great deal. “I prefer the coffeehouse type of thing to the $5-a-night setups,” Bruce Conley said. The exit of the “hippie community” from St. Mark’s Place along with the efforts of local law enforcement helped spark a 52 percent reduction in street crime. But there was still a bit of resistance. The Third Avenue Artists’, Tenants’ and Businessmen’s Association fought the NYC Planning Department’s initiative to build luxury studio units along Third Avenue. But even they were focused more on the neighborhood’s well-being than the idea of the rich displacing the poor. Cornell Edwards, a member of the community group and owner of a florist shop on East 13th Street, summed up their primary concern: “We’re fighting the kind of luxury housing that attracts young people who are not interested in the community.”