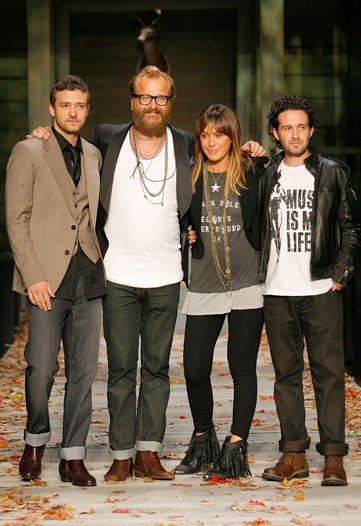 As Justin Timberlake heads to the Bryant Park tents for the first time, he has renewed confidence in his ability to make William Rast a player in the industry.

The singer-actor-producer and his reinforced design team, Johan and Marcella Lindeberg, believe their Los Angeles-based contemporary brand is hitting its stride.

“What we learned is that we really needed the brand to have a strong voice,” Timberlake told WWD. “Johan and Marcella [Lindeberg] are not only extremely creative, but they have balls. They are not afraid of anything, not afraid of any setbacks and they don’t let anything affect their creativity. They’ve definitely taught me to be much more confident in this business.”

Timberlake and his childhood friend Trace Ayala launched the label about three years ago. At the time, Timberlake, who’s never pretended to be a designer, acknowledged that he wouldn’t have much time to spend on William Rast. He left much of the day-to-day operations up to Ayala, who had the idea to launch a fashion line in the first place. Ayala took up fashion design as a hobby as a teenager — even creating jeans for Timberlake when he was on tour with ’NSync.

The line launched in 2005 with the help of the brand’s parent, People’s Liberation Inc., which produced the product and sent it to retail with much fanfare, as many celebrity lines receive. There was a personal appearance at Bloomingdale’s in New York and a concert-runway show in Los Angeles. But the brand seemed to fade as the seasons progressed, until three seasons ago when Timberlake turned to the Lindebergs — two of his favorite designers — for help.

Although the couple also works on several other design projects, including the J. Lindeberg line, they (along with their eight-year-old daughter, Blue) have just moved to Los Angeles from New York to be closer to Timberlake and Ayala.

“The move makes it easier for us to spend more time with Justin and Trace,” Marcella Lindeberg said. “We need to absorb their lifestyle in order to really be inspired and make the line work.”

Timberlake said the cross-country move has been a big help.

“We speak all the time and now we are together all the time,” he said. “I’ve even babysat their daughter, which was fun. We are like an extended family. It’s all about communicating.”

Now, as the company prepares for its first fashion show at Bryant Park on Monday, Timberlake said he has never been more ready to showcase what William Rast is all about. The entertainer’s inspiration for the fall collection came from what he calls “a new America.”

With President Obama in the White House, Timberlake said he has been inspired to showcase a line that’s full of what American fashion should be about — leather motorcycle jackets, oversize flannel plaid shirts, black skinny and acid-wash denim jeans. And, while this isn’t the brand’s first runway show in New York — William Rast showed at the Roseland Ballroom here last season — he said being at the tents makes the show seem like a much bigger deal.

“From what I understand, a lot of people are backing out of the tents,” he said. “But we want to show that we are ready to be there, we are employing people and we are going to take it to a whole new level.”

Colin Dyne, chief executive officer of William Rast, said despite the recession, the brand is growing at retail and women’s wear has become an overall larger portion of the business. The brand sells in major department stores, including Bloomingdale’s, 500 specialty stores, such as Saks Fifth Avenue, Neiman Marcus and Nordstrom, and 180 stores throughout Europe. Nordstrom in particular, Timberlake said, has been an ideal partner. Anita Ortiz, national merchandise manager for Nordstrom Savvy and Individualist departments, said the brand has been selling well.

“William Rast has continued to attract our customers’ interest because it has evolved into a full collection that offers a juxtaposition of feminine and masculine styling,” she said. “The customer can build her wardrobe within the brand with their denim jeans and their feminine jackets.”

Although the spring line has just hit the sales floor, Ortiz said it is already doing robust business.

“I love William Rast’s spring line because they built on what they do well: boy meets girl with a sexy edge,” she said. “And for the spring season, they injected the line with new silhouettes like the boyfriend short and oversize silk boyfriend blouses.”

And, even as many brands are looking to cut back, William Rast has big plans as they move forward. There will be a women’s shoe line launching for spring (produced in-house, not through a licensing agreement) and while Dyne wouldn’t divulge the details, they are working on a plan to open William Rast stores. In addition, there’s a new marketing campaign in the works for fall and a plan to work with retailers on a more personal level.

“In this economy, it’s so important for us to support our specialty stores,” Dyne said. “The more we can do to promote our brand can only help their businesses.”

To take promoting the brand a step further, Johan Lindeberg has signed on to be Timberlake’s stylist. He’s creating everything for him — from the tuxedo he wore to this week’s Grammy Awards to a suit for when Timberlake hosts the Costume Institute gala at the Metropolitan Museum of Art in May. A sampling of Timberlake’s made-to-measure outfits will be showcased on the runway next week, and Lindeberg said he hopes to eventually offer them for wholesale, but only to a select few stores.

“He’s going to wear only William Rast from here on out,” Lindeberg said. “For me, it has been great to work with him on his style and infuse that into William Rast.”

Timberlake expressed his excitement about what’s to come from the brand.

“I feel like when the four of us are all together, William Rast is like the coolest new band that people are just starting to talk about,” he said. “We just haven’t made it big-time yet, but we will — we are just coming up.”