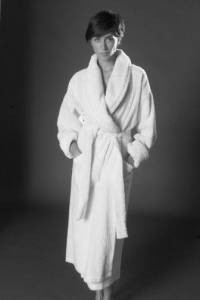 NEW YORK — Despite the continued lackluster retail scene, a strong turnout is expected at next week’s early fall market, where buyers and vendors will search out “the comfort zone.”

Two factors are weighing heavily on the outcome of order writing at the Nov. 4 to 8 market: tight open-to-buy dollars and the management lockout and ongoing labor dispute at docks on the West Coast that bottlenecked cargo and has slowed deliveries to a snail’s pace.

However, manufacturers said they anticipate stores will find money for innovative merchandise that will stimulate sales. Ideas expected to whet consumers’ appetites include a broader range of colors, whimsical prints, textures and a variety of sheers like flocked or printed meshes, rich-looking silks and ethereal chiffons.

Top ideas will include:

At-homewear items such as two-piece separates that can be casual or dressy; novelty pajamas; long and short loungers, and softly tailored wrap robes in ultrasoft microfibers that contain Lycra spandex, Tactel, CoolMax and Soft Comfort Lycra, as well as softly brushed cottons. A majority of makers and retailers are describing this line of business as “comfort zone” apparel.

Home accessories that coordinate or can be mixed or matched with sleepwear and loungewear by brands like Karen Neuburger, who is doing a bedding license with Hollander Home fashions, and August Moon by August Silk, which is producing silk pillows and throws for the boudoir.

A continuation of dual-purpose daywear items, like camis and slips and coordinating thongs, “cheeky” pants that ride high over the derriere, and boy-cut briefs.

Pairing separates in different fabric mixes, such as a stretch lace top and silk drawstring pants.

Chuck Nesbit, president and chief executive officer of Sara Lee Intimate Apparel, said: “Our fall intimate apparel sales have been very strong at retail. As indicated in Sara Lee’s quarterly earnings report, unit sales on intimates realized double-digit increases in the quarter ending in September. Much of this growth has been due to successful new products. I anticipate retailers attending the market in November will have a high level of interest in the new products we are counting on to drive growth this spring.”

Meanwhile, with holiday business fast approaching, a key topic of discussion next week will be the time line for distribution of goods manufactured in China, Taiwan, Indonesia, and areas in the Mideast such as Turkey. The categories most affected by the West Coast cargo backlog are sleepwear and robes, and underwear and bras.

The hardest-hit segment is expected to be cold-weather flannels, which have a limited window for seasonal selling. However, some vendors said they have avoided delivery problems by changing shipping routes to the East Coast this summer, and some are even going as far as paying to fly merchandise in by air cargo.

Jim Mogan, president of the Intimate Apparel Division of Kellwood Co., said: “Business has been difficult, but we took the right steps, particularly with our Biflex division, to circumvent any problems with the port strike by rerouting goods to New York before the strike. But what did affect us was the hurricane in early September that hit a Crowntuft plant in Mexico. That kind of set us back.”

Sheila Solomon, a vice president of the Underfashion Club, said: “Some of our Mideast customers at Priamo Designs are not coming to the New York market because of Ramadan and a general malaise regarding [the potential of] a major conflict in the Mideast. Then, there’s the aftermath of the port strike on the West Coast. It’s really bad and a lot of companies are getting hurt. But it’s proved to be to our advantage because we manufacture in New Jersey.”

Marvin Backer, ceo of Flora Nikrooz Lingerie, said: “Budgets have generally been cut. We just did the first of the regional markets in Atlanta, and it was bleak. Retailers are going to look at the New York market, but I don’t know how much business will actually be placed in November. They will want to see how Christmas business works out.

“Retail management will be looking for special items,” Backer said. “However, they’re not looking for the icing on the cake. They will only buy what they know the store can sell.”

Michelle Clark, vice president of merchandising at Movie Star Inc., said: “We’re not hearing great things about retail business right now, but we are optimistic about our business because we are still doing very well with stretch laces, flocked and printed meshes, and combinations of stretch lace and polyester charmeuse. Daywear is a category that has come alive for us, especially little camisoles and cheeky pants.”

Lisa Leigh, director of merchandising and sales for August Silk Intimates, said: “Better lingerie is doing fairly well this fall and we are encouraged it will hold up for holiday selling. We are starting to see an indicator that lace and dressy separates are very strong.”

Regarding buyers’ budgets, Leigh said, “When there’s newness, retailers will find the money for their budgets. They’ve made that very clear.”

Peter Cooper, vice president of Lady Ester Corp., said: “What’s selling for us right now are embroideries and feminine-looking Venise lace trims, as well as camis and seductivewear items like baby dolls, teddies and slips. We’ll continue to show lots of embroideries across the board in our Je T’Adore, Escapade and Wondermaid lines. Plus sizes have been very strong in the Wondermaid line, for which we will be doing more microfiber daywear.”

Stan Herman, designer of robes and at-homewear bearing his name at Kellwood’s Crowntuft unit, said he will focus on earlier pre-fall deliveries beginning in early July.

“It’s the first time we’ll be doing this because we want to service the specific needs of retailers,” Herman said. “We’ll be doing more sleepwear than we’ve ever done before, especially softly brushed items. A consumer has to really be seduced to go into stores today and the comfort zone products are selling very well.”

Kellwood’s Jim Mogan said major changes are taking place in the firm’s Intimate Apparel Division, a move that Mogan said will “address all of our customers’ at-home needs.”