Despite its deep roots in rugged outdoorwear, Woolrich has managed to get in touch with its feminine side, producing women’s fashions that mix a lighter feel with the company’s signature rustic touch. 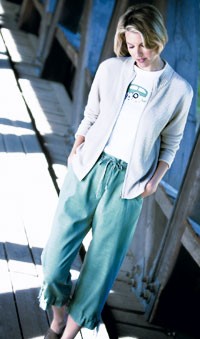 Despite its deep roots in rugged outdoorwear, Woolrich has managed to get in touch with its feminine side, producing women’s fashions that mix a lighter feel with the company’s signature rustic touch.

“Historically, we have always produced apparel for people who spent a good deal of time outdoors,” said Roswell Brayton Jr., president and chief executive officer. “What has changed about that is it’s no longer people who work in the outdoors, but it’s people who like to have active lifestyles and just be in the outdoors.”

That’s not the only thing about the line that’s changed over the company’s long history.

When Brayton was a salesman for Woolrich in the Seventies, he said the brand’s women’s apparel was more or less the men’s line made in women’s sizes.

“The colors may have been a little bit different, but it was still a men’s garment,” he said. “That is no longer the way to do business if you’re aggressively pursuing the women’s business. Now, we’re really designing women’s sportswear for people who like the feel of the outdoors, people who like to garden or bird-watch.”

Wholesale prices run from about $10 for a turtleneck and $15 for long-sleeve woven tops up to slightly more than $35 for sweaters.

Produced in Asia and sold through 16 outlet stores and about 2,500 wholesale accounts, the line has a lot of wovens for fall, such as cotton T-shirts and printed tops. These are easily matched with the brand’s fine-gauge corduroy shirts, mock-turtleneck sweaters and fleeces for a layered look. The top-selling bottom is a corduroy pant with spandex to offer a forgiving stretch.

Even though the company, with its outdoorsy positioning, operates in what Brayton acknowledged is a “very competitive niche,” he noted, “There’s a lot of opportunity for a company like us, because we are truly a lifestyle brand.”

Much of the strength of that brand comes from its authenticity and long history, he said.

“It’s a lifestyle brand that can be extended as long as it’s extended with the heritage and the outdoor brand in mind,” said Brayton. For instance, the company has a line of furniture, but it is styled to be more appropriate for a cabin than a city apartment.

In addition to brand extensions such as the furniture line, Woolrich has room to grow geographically into the Sunbelt states as well as internationally.

Woolrich currently does about 60 percent of its business through outdoor stores, such as Bass Pro Shops, and the balance in Dillard’s, as well as some regional department stores such as Gottschalks.

“We kind of think the soccer mom and above is our core customer, because she’s still athletic, may have a couple of little kids, but wants to still be fashionable with clothes that are not as restrictive as the junior market,” said vice president of sales and domestic licensing Jerry Rinder.

That translates into a core customer who is about 35 to 55 years old, though the brand is picking up more customers closer to 30, he said.

Younger shoppers aren’t the only new customers the company is hoping to attract. This year, Woolrich expanded its women’s offerings with the addition of petite sizes and plans to keep going with an even broader size range.

“We are doing all the analysis now to launch, probably for fall ’06, a plus-size business,” said Rinder.

And growth in the sportswear business — often the key to a brand’s fashion offerings — supports Woolrich’s other offerings.