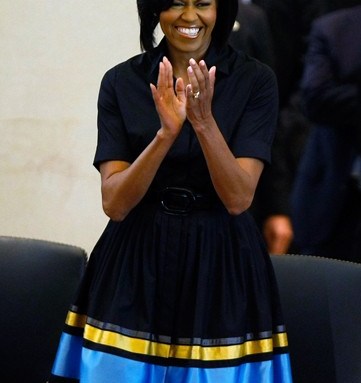 She’s been called a one-woman stimulus plan for the fashion industry. And certainly the breathless cataloguing of Michelle Obama’s sartorial choices — from the $565 two-tone Lanvin sneakers she wore to a D.C. food bank in mid-May to the black Michael Kors sheath and Peter Soronen corset she donned for a recent Time gala — has shown no sign of abating since her husband took office in January. Along the way, those who produced the clothes, whether J. Crew or high-end designers (despite the kudos she has garnered for the former, Mrs. Obama has shown a considerable penchant for expensive stuff, too), have been catapulted into the limelight. But what impact has such triple-A-list exposure had on their businesses?

Both a little and a lot, it turns out. In terms of name recognition, the effect for some of the smaller types Obama has championed, such as Jason Wu and Thakoon, has been immeasurable. But so far, the bottom-line impact on the klatch of tony designers Obama has worn consistently is, as much as can be measured, less than spectacular.

“There has been a huge interest in special orders, which honestly has helped maintain a business in this gloomy time,” said Peter Soronen, whose pieces — such as the custom-made cherry red dress Obama wore to the Alfalfa Club dinner in March; the cluster-sequined gown she wore to the Governor’s Ball, and the floral dress she wore on Easter Sunday — are sold through Ikram, the Chicago boutique owned by Ikram Goldman, the First Lady’s de facto stylist. (While Soronen’s spokeswoman would not give out specific prices, she said the latter two dresses retail in the upper $3,000 and $2,000 range, respectively.)

Soronen, who called his 11-year-old company “a semicouture house” because custom orders make up a large percentage of his business, was quick to add that major retailers have not yet come knocking for his entire collection, although the individual dresses Obama has worn have elicited direct specialty boutique sales orders and, in some instances, requests for an entire new dress.

“With the sequined dress, there were stores that said, ‘How can we get ahold of this?’ And then there were the stylists who called and said, ‘I need a version of that.’ I’m lucky because I’m pretty much a specialty designer anyway, so I can actually handle special orders a lot easier than some companies that have to go through more red tape.”

Of the larger companies from which Obama has chosen clothes, J. Crew has been the most ubiquitous, with the beaded cardigan she wore in Europe (retail price: $298) going on back order nearly immediately, according to creative director Jenna Lyons.

“We didn’t know she was going to be wearing it, so we only had 20 pieces left, and the demand was obviously bigger than that,” said Lyons, who noted that, with the exception of the children’s clothes custom-designed for the Inauguration, Obama buys her J. Crew pieces without the company’s input (as for whispers that J. Crew is simply a token affordable retailer the First Lady dons to appease the peanut gallery, Lyons said: “I really hope that she’s wearing the clothes because she likes them. Everything cannot be Narciso Rodriguez, unless you’re a millionaire….If it’s a token, we’re thrilled to be the beneficiary, but I hope that it’s not”).

Lyons wouldn’t comment on direct sales figures, though she did acknowledge the company is watching the First Lady’s aesthetic for clues as to what women may want from future collections. “A lot of the things she’s been wearing from us are sort of classically in our repertoire, like cardigans and pencil skirts, but one thing we have paid attention to is the height of her heels,” Lyons said. “Everybody notices she wears low heels. We’re like, ‘Ah-ha.’ I imagine there will be a lot more kitten heels on the market next year.”

And then there are those New York-based designers — Isabel Toledo, Thakoon, Maria Cornejo, Rodriguez and Kors — whose names are inextricably linked to the First Lady, forming an elite club to which every young (and not-so-young) American designer wants entrée.

“Everybody called me to say the dress sold out,” said Sophie Theallet, the group’s latest addition, whose spring 2009 striped shirtdress (retail price: $1,925) Obama wore in early May to an event honoring Sojourner Truth. Sounding a bit flustered, the French-born, Brooklyn-based Theallet added, “We are still going through all e-mails from new stores that want to take appointments to see the next collection. And I have a lot of women calling [and] asking if I can make a special dress for them.”

Special orders aside, not all of the favored designers have experienced an uptick, despite the invaluable publicity. “As far as people coming in and asking specifically for what she is wearing, no,” said Cornejo, whose bell-sleeved wool coat and cropped jacket were worn by Obama. (The designer’s outerwear retails from $437 to $1,099.) “I think we’re all very privileged to have her wear our clothes, but we don’t count success by number of pieces sold. And honestly, it’s more about reaching the right clientele. The women who come into my store, the last thing they want to do is buy something just because it’s been photographed a lot.”

For Kate and Laura Mulleavy of Rodarte — whose day dresses retail for between $2,500 and $13,000 and whose taupe pleated dress from fall 2007 the First Lady wore on several occasions, most recently to meet with Jordan’s Queen Rania — the impact is about visibility among industry insiders: “We had so many people contacting us, because they were so excited to see [her] in one of our dresses,” the Mulleavys wrote in an e-mail.

And for a designer lucky enough to have his designs worn on foreign soil, such as Thakoon, whose floral dress and coat Obama wore for her photo op with French first lady Carla Bruni-Sarkozy, the exposure can result in a blitz of worldwide press clippings (that dress and coat were special orders made prior to the Inauguration, though a similar floral shift costs about $1,250).

“It was like having an international ad campaign,” Thakoon said. “There are a lot more stores coming to market appointments than ever have before, people from other countries who seem to feel that whatever is good enough for the U.S. is good enough for them.” Yet he added that, while he has not observed a tangible increase in sales, he hasn’t had time to sit down and measure such a shift. “I think the effect is something that will be felt more down the line, when stores that have placed their first orders start selling the designers she’s wearing.”

Yet the designer who retailers report as most clearly benefiting from the benefactor-like role Obama has undertaken is Wu, whose dresses she has worn on multiple occasions, most memorably to the Inaugural balls and on the cover of Vogue. It may be that the aura of glamour and white-hot media coverage surrounding his Inaugural gown propelled him ahead of his colleagues — or perhaps, with recent trunk shows at Jeffrey in Atlanta and a Saks Fifth Avenue outside Philadelphia, an appearance at the White House Correspondents’ Dinner, the Met Gala and a recent spread in New York magazine, Wu is simply, as they say, working it.

“First of all, I think Jason is incredibly talented, but he’s really catapulted because of Michelle,” said Jeffrey Kalinsky, president of Jeffrey and director of designer merchandising at Nordstrom, who noted that a Jason Wu trunk show held in Atlanta on May 8 was “an absolute mob scene” and had sales of more than $125,000. (As for the other Obama-favored designers Kalinsky carries, Rodriguez and Thakoon, neither has had a recent trunk show, yet sell-throughs of their spring collections have been 60 and 50 percent, respectively, a remarkably healthy number, even in flush times.)

At Saks, “the thing we notice is women coming out, whether to the store or going onto the Web site, and looking at what else he’s doing,” said fashion market director Colleen Sherin. “We carried Jason early on, but this has taken him to a whole new level,” she said. “For customers who hadn’t heard the name before, they come in and see it, and there’s name recognition….It validates [the designer].”

Added Brian Bolke, co-owner of Forty Five Ten in Dallas: “I don’t think our customers are the kind of people who are going [to say], ‘I want the Michelle Obama dress,’ but the fact that she wears these designers legitimizes the purchase they’re making. They feel like their head is in the right place.”

And while those high-end designers may not be experiencing skyrocketing sales, their buyers are downright effusive when it comes to the unorthodox relationship between the First Lady and the Oz-like Goldman. The effect is such that the (pricy) little shop around the corner is getting its own boost: Despite criticism that turning to only one store for her wardrobe necessarily eliminates designers from the First Lady’s consideration, Obama, said boutique owners, has piqued interest in their own businesses (it should be noted that Ikram does not carry Sophie Theallet, Michael Kors or Tracy Feith, whom Obama has also worn).

“I don’t want to speak for Ikram, but I don’t think the exact thing she’d have Michelle Obama wear would be the thing she’s telling other women to wear, which is how a great store owner should operate,” said Forty Five Ten’s Bolke. “If anything, [Obama] has given a boost to the idea of shopping in a specialty store that’s really looking out for their clients.”