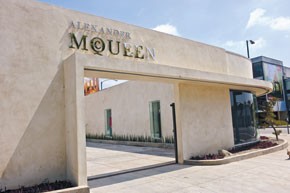 LOS ANGELES — Meet ‘Angel of the Americas,’ the strapping seraphim of stainless steel who starting today will greet visitors to Alexander McQueen’s new store in all his shiny, anatomically correct glory. The store, on the corner of Melrose and Orlando, features a high-drama skylight through which the sculpture, by Robert Bryce Muir, appears to be ascending to observe the L.A. skyline. “Los Angeles is the City of Angels,” McQueen said. “I wanted something to reflect that.”

Alexander McQueen knows how to make an entrance. The British designer heralded his arrival on Los Angeles’ luxury retail landscape with his signature flair — installing a 9-foot-tall sculpture of a naked man that pokes through the roof of his flagship on Melrose and Orlando Avenues, which opens today.

“Angel of the Americas,” the stainless steel sculpture by artist Robert Bryce Muir, is suspended vertically from a circular skylight. Its head, outstretched arms and torso are visible above the structure’s rooftop, the lower body of the anatomically correct work is suspended above the selling floor.

“L.A., like London, has so many art collectors and I wanted to give a focal point to the store,” McQueen told WWD. “I was also inspired by the Jesus Christ statue in Rio de Janeiro. Los Angeles is the City of Angels and I wanted something to reflect that.”

A billboard above the store (now featuring a cell phone ad) is to serve as an unlikely canvas, showing work by collaborating artists.

The 3,100-square-foot space is sleek and futuristic — architect William Russell’s signature — with a curved exterior facade and few straight lines inside. Hand-smoothed white plaster walls arch into cathedral-like vaulted ceilings, and clothing racks and display cases hanging from the ceiling give an ethereal floating effect to the fixtures.

Huge curved glass doors and curved windows bring a soft natural light into the space, which features muted tones and floors of gray terrazzo marble inlaid with mother-of-pearl. Two bonsai trees that partly shield the windows are among the landscaping touches inspired by McQueen’s Buddhist beliefs. The store’s cash registers, speakers and ventilation are hidden.

The curving interior walls lend a seamless feel to the space, which McQueen’s creative coordinator, Trino Verkade, said was paramount to the brand’s edgy artistic disposition.

McQueen’s first store opened in New York in 2002, followed by boutiques in London and Milan. The brand has 20 stores worldwide. Some are franchises and others are brand-owned. More shops are in the works, including a Paris store in 2009.

The Los Angeles store, which McQueen said was “in the cards forever,” will carry the label’s full line of women’s and men’s wear as well as accessories and luggage and will eventually have some exclusive merchandise.

Despite the economic downturn, McQueen chief executive officer Jonathan Akeroyd said he expects the Los Angeles store to be among the brand’s top three performers in retail sales.

“In times of recession, I think fashion is escapism,” McQueen said. “It’s sort of a luxury sort of escapism. When I started in fashion, England was in a recession with [former prime minister] Margaret Thatcher. I think it’s a great time for new growth.”

The stretch of Melrose that now boasts McQueen’s flagship also hosts an expanding list of fashion labels, Marc Jacobs and Diane von Furstenberg among them.

The area, Verkade said, felt like “home” for the brand, but it took patience to secure a spot. McQueen found the space in early 2007 but the existing tenants, a garden and pottery shop, didn’t vacate the building until August, then came a near-total demolition before construction began in December.

As for McQueen’s next collection, “I might go modern and it definitely will be sexy,” he said. “The queen becomes a woman. She comes down from the tree looking for some fun — and I’m not talking fluffy fun. The pre-collection is quite seductive and modern. It’s wearable, not modern-futuristic.”