The Ghost In The Machine

Ideas come regularly to Yoox founder Federico Marchetti. After all, he's an entrepreneur, not a fashion person or, god forbid, a techie. It's just that Yoox, the Italian answer to Bluefly, was the first idea he happened to execute. 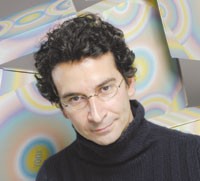 Ideas come regularly to Yoox founder Federico Marchetti. After all, he’s an entrepreneur, not a fashion person or, god forbid, a techie. It’s just that Yoox, the Italian answer to Bluefly, was the first idea he happened to execute.

The concept is to sell fashions you can’t buy in a regular store, Marchetti explained over cocktails at the Maritime Hotel in the Meatpacking District. “Since we don’t sell the same collections as the stores, we feel we are a little alternative and underground somehow.”

The outdoor cafe was so cold and windy that Marchetti had to pull up the hood of his gray cashmere sweater, which made him look mischevious when, in fact, he’s elegant, poised and fluent in three languages.

In addition to carrying a huge selection of out-of-season designer fashion and accessories — most of them from high-quality labels manufactured in Italy — Yoox stocks vintage and special collections made just for the online store.

Nonetheless, Yoox has arranged to sell its third special collection, by Paris-based designer Bernhard Willhelm, at the Colette store in Paris. Inspired by the theme of ghosts, zombies and monsters, the casual summer line consists of some three-dozen mostly white pieces for men and women. A preview of the line made its debut at Colette and on Yoox’s French site Tuesday. The full line, which was manufactured in Belgium, will be available on Yoox worldwide and at Colette early next month. Rafael Jimenez, a consultant who collaborated on the Comme des Garcons Guerrilla Store projects, helped select the designer. Willhelm arrived at the theme because, “when someone buys something on the Internet, it’s kind of like a ghost is buying it,” explained Marchetti.

Although this may sound playful, Yoox’s business plan is more serious. The company turned a profit last year on sales of $47 million, or 36 million euros, and, surprisingly, Benchmark Capital — one of Silicon Valley’s leading venture capital firms, which ordinarily shun the fashion world — invested $7.2 million in the company in September 2003. The site’s conversion rate is 1.2 percent, and 70 percent of its customers are repeat buyers. Marchetti’s next goal is to become the e-commerce partner for high-end designer brands that want to open their own online stores.

It’s an interesting strategy: Designers such as Fendi and Prada have had one-page Web sites for years, perhaps because they lack the infrastructure to ship clothes directly to customers. Yoox, on the other hand, recently expanded to Japan and Canada which, as Marchetti points out, makes it the only online retailer with an expertise in high fashion that also has distribution centers and fulfillment operations on three continents.

The potential gold mine represented by the fashion world has not eluded Amazon, which, in the last six months, has been aggressively signing deals to handle Web operations for companies such as Marks & Spencer and Diane von Furstenberg.

Marchetti, who was once on the cover of Il Mondo, is already a well-known single man about Milan. Most of his time is taken up with work, which leaves little for art, his other passion. If he succeeds with Yoox’s new angle, he will have an even greater need for his first business idea, which came to him when he was eight years old: A pill that lets a sleeper get eight hours’ worth of sleep in only 60 minutes.