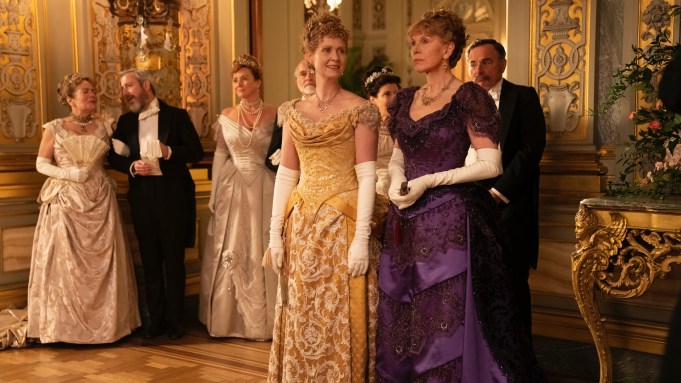 HBO’s new series “The Gilded Age” takes a deep dive into the era of 1882 New York City at a time of heightened prosperity, industrial growth and an internal clash amid society as “new money” figures rose up in the ranks among “old money” fixtures.

The HBO show, which comes from “Downton Abbey” creator Julian Fellowes, focuses on a range of characters played by Christine Baranski, Cynthia Nixon, Louisa Jacobson, Carrie Coon, Morgan Spector and others. The show follows Marian, played by Jacobson (who is Meryl Streep’s daughter) who recently lost her father and moved from rural Pennsylvania to live with her “old money” aunts Ada (played by Nixon) and Agnes (played by Baranski) in New York City.

Costume designer Kasia Walicka-Maimone was tasked with portraying this divide between “new money” and “old money” characters through their period costumes. The costume designer and her team of roughly 65 costumers thoroughly researched the Gilded Age era — and the time periods before and after — to understand the styles of 1882 to create roughly 5,000 costumes for the show’s first season.

Walicka-Maimone stated that most fabrics were sourced from Rome, Paris or London or created in the show’s costume house. Few vintage materials were utilized — Walicka-Maimone used some vintage lace and period jewelry — as they were too fragile to be shaped into the tight, corseted dresses.

Russell is the wife of a railroad tycoon and recently moved her family into an “old money” neighborhood that doesn’t accept her. Her costumes clash with that of her neighbors, with Russell favoring heavy ornamentation, standout headpieces and bright colors.

“She’s trying to be the grand dame of all the grand dames,” Walicka-Maimone said. “She’s not trying to break away from society, but she’s just trying to be a better version of the old society. I tried to create this subtle difference between her costumes and the ‘old money.’ The silhouette is the same — nobody would dare break the silhouette — but with Bertha, she goes more with what’s current fashion.”

Russell’s costumes were a stark contrast to the central “old money” characters of Agnes and Ada, who both stick with monochromatic jewel tones, with the former regularly wearing shades of purple and blue while the latter wears gold, orange and red. Walicka-Maimone described the aunts’ dresses as having “heavily ornamented fabrics that at the same time are extremely elegant, discreet and never too loud,” but also evoking a “wealth of history in every element” like the embroidery or depth of color.

While the show’s central character Marian comes from an “old money” family, her costumes don’t necessarily fall in with that style, nor with that of “new money.” As Marian is new to the city, her style reflects how she’s absorbing the new people and experiences around her.

“She has a very beautiful sensibility of a girl that comes from a smaller town and then she lands in New York between those giant powers of a world that is very well established with very classical values,” Walicka-Maimone explained. “And then she gets a glimpse of Bertha, who is across the street. [Marian] is exposed to all of that and at the same time she’s absorbing it all and she creates her own vocabulary.”

Walicka-Maimone described the characters’ style as a mix of “old money” and “new money,” with Marian favoring pastel yellows and blues, lighter fabrics, lace and floral prints. Her style is also meant to reflect her newfound independence and how she’s trying to carve a place for herself in between both of these worlds.

For all the characters, color plays a huge role in furthering the story and each person’s narrative. Walicka-Maimone explained that there are certain colors reserved for specific characters, like jewel tones for the aunts and pastels for Marian, and that the hues were used strategically.

“We are all coded for color responses,” she explained. “We know that color carries so much more information than just what you would call color. It carries a wealth of information. I wouldn’t put Marian in a jewel tone. That’s just not her character. She’s young and innocent and she’s a breath of fresh air that shows up in the house. Bertha, we treat those colors symbolically. Her husband is responsible for railroads, so that idea of steel and things that shine, all of that is coded into the character.”

Overall, Walicka-Maimone said the costumes serve as a representation of the world at that time and furthers the narrative and division between the characters.

“[The costumes] enhance the storytelling,” she said. “That’s always our job as design teams to represent the underlying story of each character. I think you feel that just from looking at the people and recognizing each character.”

The Best Fashion Moments in ‘And Just Like That’