The Girl in the Picture

It might be hard to feel too sorry for them, but these young models suffered for their craft this season. 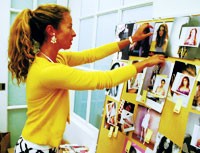 NEW YORK — You might not think that the hoary maxim, “You have to suffer to be beautiful,” applies to young models. But it certainly did this season. Besides the usual poking and prodding to go to castings, girls had to pound the city pavement in their three-inch heels amidst the chaos of the Republican National Convention and some rather unpleasant weather. Here, WWD’s biennial guide to the freshest faces working the New York runways.

Marta Berzkalina/One
Age: 19
Home country: Latvia
Favorite feature: “My elfish ears. My friends even have a nickname for me because of them: Elf.”
Guilty pleasure: Fries and ice cream — mixed together.
Biggest pet peeve: “When people walk slowly in front of me.”
Favorite drink: B52s and Long Island iced teas.
I think that George W. Bush is… “The guy responsible for making me late to my castings. I never even heard of him until a few days ago.”
If I wasn’t modeling, I’d be… “In school, sitting in detention, cleaning the classrooms as punishment.”
Madonna is… “Amazing. The story of her success should be written in history books.”
The bottom line: This girl is strikingly and unconventionally beautiful. She’s in the new Prada campaign by Steven Meisel and is walking for, well, everyone.

Elyse Taylor/Next
Age: 17
Hometown: Sydney
Favorite designer: “YSL. Gotta get me one of those new puffy jackets.”
Favorite movie: “Muriel’s Wedding”
Favorite drink: “I don’t. I’m underage. Cheers, Mum!”
Role model: My agent, Stephen Lee.
When I’m 40, I’ll be… “Retired in Australia surrounded by rugrats and a hot husband.”
Madonna is… “Like me…a virgin!”
The bottom line: This girl is a great classic beauty. She looks like Grace Kelly, and jokes
like one of the guys. She’s walking for Ruffian, Nicole Miller, Betsey Johnson and BCBG,
among many others.

Sally Lotter/Next
Age: 17
Hometown: Reading, Mass.
Favorite food: Vegetable lo mein
Favorite designer: Nicolas Ghesquière: “He’s super-duper.”
One thing you wouldn’t want your agent to know: “That I missed a casting this morning.”
If I wasn’t modeling, I’d be… “Waitressing at home.”
Madonna is… “A valid icon — she’s done it all.”
The bottom line: Sally is quirky and cool, and she even makes some of her own clothes. Michelle Smith, designer of Milly, says, “Great style, really sweet, her face looks like a doll. Her book is phenomenal.” She has shot Italian Vogue with Karen Collins and Teen Vogue with Patrick Demarchelier. This season, she’s walking for Perry Ellis, Swarovski, Cynthia Steffe, Vera Wang, Milly and most likely, Marc by Marc Jacobs.

Melody Woodin/Supreme
Age: 18
Hometown: Wilmington, Del.
Favorite food: Ravioli
Guilty pleasure: Kevin Bacon
Most embarrassing moment: “Singing Britney Spears in my room, thinking I was alone, and realizing that my brothers’ friends were standing in the doorway laughing at me the whole time.”
Biggest pet peeve: Magazines that don’t have page numbers.
When I’m 40, I’ll be… “On my farm.”
Madonna is... “Awesome. A woman who forged her own path.”
The bottom line: Melody has that all-American charm. She walked at Doo.Ri and Matthew Earnest this season, among others.

Hawa Diawara/Supreme
Age: 19
Hometown: Mali, Africa
Favorite designer: “Definitely Dolce & Gabbana.”
Favorite food: Coconut shrimp
Favorite drink: “I don’t drink. I drink ginger ale and pretend it’s champagne.”
Biggest pet peeve: “Men who don’t hold doors for ladies.”
I think George W. Bush… “Should not run for reelection.”
When I’m 40, I’ll be… “35.”
If I wasn’t modeling, I’d be… “A cop.”
The bottom line: Seeming to come from out of nowhere, this beauty was confirmed for Proenza Schouler, Miguel Adrover and Imitation of Christ.

Dalia Dubrindyte/Major
Age: 17
Hometown: Jonava, Lithuania
Favorite feature: “My eyebrows.”
Favorite food: “Everything my mom makes.”
Favorite designer: “Whoever gives me the most clothes.”
One thing you wouldn’t want your agent to know: “When we say we’re going to the gym, we’re really going for ice cream. I’ve been to the gym twice in my life.”
I think George W. Bush is… “I have no idea. I don’t have a TV.”
When I’m 40, I’ll be… “A businesswoman.”
Madonna is… “Immortal.”
The bottom line: She’s in the J. Mendel ad campaign, and is walking for Lacoste, Vera Wang and Alice Roi. Roi says, “She’s got that quiet confidence that we’re always looking for.”