The Greatest Show on Earth

The stakes were raised significantly in terms of theatrical presentations. From Fendi’s Great Wall show to Valentino’s fireworks over the... 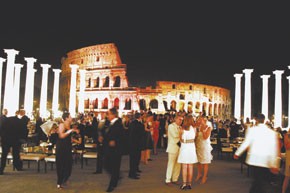 The stakes were raised significantly in terms of theatrical presentations. From Fendi’s Great Wall show to Valentino’s fireworks over the Colosseum, fashion was all about spectacle this year.

Moments before he sent 88 models sashaying down the Great Wall of China for a Fendi extravaganza capped off with giant double-F logos projected onto neighboring mountains, Karl Lagerfeld declared: “Fashion is a kind of show business, too.”

View the full coverage of  WWD Year in Fashion 2007 at www.wwd.com/yearfashion07

And how. Production values have soared to such an extent that fashion spectacles this year incorporated everything from acrobatics and antique merry-go-rounds to actual jet airplanes. Designers from Marc Jacobs to Dries Van Noten, Viktor & Rolf to Stella McCartney are ramping up their shows.

Runways are getting longer (110 yards at Christian Dior for the July couture), show locations more exotic (the remote dunes of the Gobi Desert for Pierre Cardin) and parties more over-the-top (a glitzy Rome weekend packed with anniversary events for Valentino, anyone?).

Lagerfeld himself was at the forefront of the trend, staging a Chanel cruise show at a private airport in Los Angeles — complete with two customized “Chanel Line” Challenger 601 aircraft — and constructing what might well have been the world’s biggest bow (20 feet tall and 50 feet wide) as the backdrop for Chanel’s spring 2008 collection under the soaring 11-story dome of the Grand Palais (just in case you missed the bows decorating some shoes, clothes and hairdos).

Demi Moore, Victoria Beckham and Lindsay Lohan were among the glitterati who gathered to see jet-set looks step out of customized planes, complete with an arrival announcement: “Please be careful when opening the overhead compartments: Some quilted bags may fall.”

Also in L.A., Giorgio Armani amped up the star wattage, collecting a crowd to rival the Oscars at his Armani Privé show. Sandwiched front and center at the February show were Helen Mirren, Cate Blanchett, Clive Owen, George Clooney, Penélope Cruz, Leonardo DiCaprio, Beyoncé and Martin Scorsese. Across the way were Katie Holmes, Josh Hartnett, Natalie Portman, Adrien Brody and Mark Wahlberg. “I’m presenting to people who are not there to be critics,” said Armani. “It’s more a spectacle and one of emotion as well.”

But the scale of October’s Fendi foray, said to have cost upward of $10 million, even had Lagerfeld pinching himself. “Can you imagine sitting here?” he said, an expanse of knitted sable spread over his lap in his Fendi-furnished suite backstage, steps away from the awe-inspiring segment of the 2,000-year-old structure he had transformed into a runway, lined with heated bench seats. “After this, where can you go?”

A few minutes later, Silvia Venturini Fendi arrived and the two tossed around a few ideas: the pyramids of Egypt, the Taj Mahal or the ancient city of Petra, Jordan.

“Let’s see what we do next year,” Venturini Fendi mused. “I told [Fendi chief executive] Michael Burke, ‘You should get in touch with Richard Branson and book some space on the [Virgin intergalactic] shuttle.'”

To be sure, Fendi’s Chinese feat was already quite out-of-this-world. A team of 80 employees, including 10 seamstresses, flew to Beijing to mount the event, attended by actresses Ziyi Zhang, Kate Bosworth and Thandie Newton, LVMH Moët Hennessy Louis Vuitton brass, Beijing power players and fur-clad socialites from New York to Hong Kong.

Arriving at her seat, Interview editor in chief Ingrid Sischy was genuinely agog taking in the sun setting on the Juyongguan Pass and the 4,000-mile-long structure snaking up the mountain as the backdrop. “Holy smokes: If that isn’t the most dramatic runway in the world, I don’t know what is — and it sure beats the tents, and even the Louvre,” she said.

The scale of such events reflects the “unprecedented” level of interest in fashion today, from art-world players to Hollywood moguls, making it “this incredibly popular spectator sport now,” Sischy said.

Burke said large-scale events at “iconic” places — echoing the company’s claim to such hometown sites as the Colosseum and Forum in Rome — are a pillar of Fendi’s communication strategy. In 2006, it hosted a giant party at Tokyo’s National Stadium to introduce the B. Mix range of leather goods.

“At the end of the day, it’s a very efficient way of communicating what Karl and Silvia have to say about the season,” Burke reasoned.

Not counting forthcoming features in monthly magazines, Fendi already scored major media exposure for the Beijing event: The company estimated more than 100 million viewers saw images of its fashion show on such networks as CNN, ABC and Euro news, and that the return on investment was more than tenfold.

Ideas for his collections and shows often come to Lagerfeld in dreams — and they are fantastical. For a Chanel couture show in 2006, he put a 105-foot tower with a staircase hidden inside as its centerpiece. Six months later, he put his couture audience on a giant cone-shaped podium that became a moving turntable at the finale — editors and buyers spinning in front of the models.

John Galliano is no slouch in the theatrical department, either, and has certainly done his part to raise fashion’s production values to new zeniths. In recent years, his Christian Dior couture spectacles have variously featured tumbling Tibetan monks, a storm of butterfly-shaped confetti, a full gospel choir — even a steaming locomotive.

To mark the French house’s 60th anniversary last July, Galliano took over the Orangerie at Versailles, decked out the statues in surreal animal masks and invited Spanish singers and dancers to add fiesta airs to his “Bal des Artistes.” After the show, guests streamed out into the garden for an open-air party, complete with giant pans of paella, dance performances, London DJs and images from the fashion show projected on a wall of water spraying from a fountain.

Galliano has also resumed his theatrical ways with his signature shows. Last March, he brought Brassaï’s photos to life with a cast of quirky characters, five chickens, 200 butterflies, 20 barrels of straw, four Labradors, 440 pounds of potatoes — and a garrulous lady to peel them. In October, inspired by “Grey Gardens,” Galliano arranged a seaside carnival atmosphere, complete with 9.5 tons of sand, 2,200 balloons, an aloof lifeguard, a stuffed ostrich sitting on a nest of Sixties’ television sets and giant fans blowing newspaper scraps at vamping models.

Galliano works with set designer Michael Howells, briefing him and then letting him go wild. “He makes the magic happen and works out how to find a merry-to-round and transform Stade de France into a tumble-down Hamptons holiday,” Galliano enthused. In fact, the 1900 carrousel had to be dismantled and brought in piece by piece, by crane.

As evidenced by Dior’s 60th, anniversaries have become occasions to blow out all the stops.

Even without announcing his retirement, officially effective next month, Valentino gave himself a 45th anniversary bacchanal in Rome (see page 17) featuring a lavish retrospective exhibition, fireworks, dancers on wires in front of the Colosseum, a surprise Annie Lenox concert and — almost overlooked — a couture show in a restored medieval building, the endless runway lined with bold-faced names and floor-to-ceiling advertising and editorial images. The estimated cost? Upward of $10 million.

Mind you, not all mega fashion shows generate torrents of valuable press coverage. Cardin’s arresting desert show — with a thin white podium winding through the dunes at Dunhuang at sunset — was held the day after Fendi’s Great Wall show, but the 85-year-old designer “forgot” to invite the international press. They missed 100 models showing his most recent designs for his Chinese licenses, and, as a final look, a bride, who rode in on a camel.

No matter. He’ll make up for it next summer: Chinese officials have invited him to stage a massive musical about Marco Polo in Beijing in the run-up to next summer’s Olympic Games. “It’s the biggest production I’ve done in 40 years,” Cardin promised.