The impact of Tom Ford. 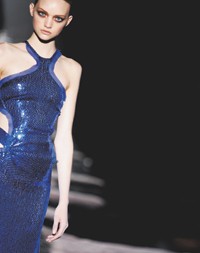 It was a golden moment for Gucci and all of fashion.

The Tom Ford era at Gucci was remarkable in a way not at all diminished by the cool distance of hindsight. Rather, those who attend the collections and sit through the endless Milan schedule feel Ford’s absence acutely and now realize just how much one designer can bring to a season.

Of course, what Ford brought most spectacularly, and most obviously, was sex. When, in his fourth season for women’s at Gucci, he exploded into superstardom with Amber Valletta under a spotlight in her shiny shirt and low-slung velvet pants, he forged a new path with blatantly sexual style. This was a major departure in an industry still reeling from the impact of AIDS and mired in a conglomeration of antifashion movements — grunge, deconstruction, the waif, heroin chic — all editorial delights and box-office poison.

Ford had arrived at Gucci five years earlier, hired by creative director Dawn Mello to work under design director Richard Lambertson. Their departures left Gucci’s creative direction in Ford’s hands, and at the still-young age of 32, he didn’t quite know what to do with it. But a ditzy teacup print or two aside, it didn’t take him long to figure it out. He studied paparazzi photos from the Seventies of Elizabeth Taylor, Grace Kelly or Audrey Hepburn decked out in Gucci this or Gucci that, although, truth be told, he made much of the house’s fabulous past that, arguably, erred on the side of embellishment. He decided to play to a woman — or perhaps, more correctly, to create a woman — who lived a latter-day Studio 54 lifestyle, one of wild nights, high-gloss lips and seriously premeditated chic.

The attitude stunned from the start. Although the early impact proved most dramatic — those first few collections, according to Ford, when all that runway sex felt so daring and new — it continued to captivate throughout his takeover of Yves Saint Laurent, where he depicted a slightly more smoldering type, and right through his final blockbusters for both houses.

Nevertheless, to equate Ford’s designs primarily with sex is to miss the larger point: They were also about power. His was a woman in control until she decided to run out of control. She chose her aggressive sexuality, she chose to perfect every last element of her hair and makeup and she chose to be noticed. In a sense, Ford took the cartoon power woman of the Eighties, unplugged her palette, de-spiked her hair and granted her vastly more options. This time, she might as well have been a kept woman as a boardroom bitch. He made no judgments, as long as she was fabulously put together. Looking good, he always maintained, takes work; he had only disdain for wash-and-wear types.

In fact, the power of the iconic Gucci girl was that of the man who created her. Ford is not a designer of tremendous range; he never was, nor wanted to be. Though his work developed tremendously in sophistication, detail, and yes, quality (by the time he exited Gucci Group, Amber’s hip-huggers looked downright quaint), the underlying aesthetic didn’t change. He kept his industry audience and his clients riveted not by seismic stylistic swings, but by the power of confidence, never letting fear of criticism temper the drama of his message. Thus, while MC Hammer pants and cone-boob bras may have made for the occasional flop, at least his audience never went away bored.

With all of that, the Gucci power trip was hardly confined to the runway. Ford’s influence was even amazing in light of the firm’s turnaround. Taking over a house on the wheels of a bizarre family drama that had moved beyond sleepy into the land of embarrassment, he and Domenico De Sole orchestrated perhaps the most dramatic comeback in the history of fashion. Along the way, they changed the industrial model du jour from one based on licensing to a vertical structure, achieved with clothes that were wildly influential and consummately salable while launching a zillion knockoffs. “All I ever wanted,” Ford said, “was to be a commercial designer.” At one point, he even referred to himself as “mass.”

Mass — in a movie-star kind of way. Ford’s own image was almost as important to the success of Gucci as were his designs. Not because one outshone the other, but because both fueled a very specific vision. Endless snapshots capture the Ford era: the spotlighted Amber; the horse-bit stiletto; Madonna at the MTV Video Music Awards; cutout white jersey; tight skirts and chubby furs, even pubic hair shaped like a Gucci “G.” Major among those snapshots is the image of Ford himself, impossibly suave, impeccably groomed and tailored, his shirt unbuttoned in a way few men can get away with or would dare try, and moving with studied ease among the Hollywood set as if he were one of them.

Which, in fact, Ford became, and not merely on the merits of his oft-cited matinee idol looks, though they didn’t hurt. When calculating what his Gucci would be — and everything about Ford’s work is calculated to the nth degree — he thought a great deal about the nature of celebrity, and how to translate its allure into a fashion collection. He saw not just potential but necessity in the Hollywood-music-fashion fusion that would become a defining element of pop culture. And he worked it brilliantly, not only dressing Nicole and Gwyneth and Tom and Rita, but befriending them, thus shifting the traditional relationship from tony steward of style to peer.

Upon his exit from Gucci, Ford insisted he felt the lure of Hollywood and was going to make movies, which he hasn’t done yet. He has, however, returned to the fashion-beauty arena with a megasexy splash for Estée Lauder, and this fall, with a far-from-mass men’s collection. Whether a women’s collection will follow remains uncertain. For now, even though fashion has moved away from his brazen aesthetic, or perhaps because it has moved so far, there’s a void that two years later has yet to be filled. But then, when it comes to wrapping sex in the trappings of chic, nobody does it better than Tom Ford.