Even if the similarities aren't readily apparent between a men's streetwear brand with "Adam Bomb" as its icon, and a women's accessories brand built from a cool leather workbag, the duo have found kinship.

Clare Vivier and Bobby Kim of The Hundreds launch their first collaboration.

The Hundreds x Clare V features a unisex leather tote, fanny pack, sweatshirt, T-shirt, socks, card case and key fob, priced $28 to $399 and available at their respective stores and e-commerce sites, that combine the L.A. fashion leaders’ colorful aesthetics and printed sayings, such as “Vive la Resistance” and “Insouciance” (hers), “Maintain the Mystery” and “DIY” (his) and “Les Cents” (theirs together).

Even if the similarities aren’t readily apparent between a men’s streetwear brand with “Adam Bomb” as its icon, and a women’s accessories brand built from a cool leather workbag, the duo have found kinship in the ways they have bootstrapped their businesses, built online communities, and given voice to political causes and organizations like Every Mother Counts, Planned Parenthood, Everytown for Gun Safety and Black Lives Matter (even before the current cultural awakening to the need for social justice).

Both have also found success with collaborations — Vivier with Toms, & Other Stories and Garret Leight, among others — and The Hundreds most recently with the estate of Stanley Kubrick (on skate decks!), rock band Blondie Beach, and the “Back to the Future” film, as well as licensed Disney, DC Comics and Sanrio properties on apparel and accessories.

Kim, who launched The Hundreds in 2003 and chronicled its ups and downs in his 2019 memoir “This Is Not a Shirt,” calls Vivier “OG,” and the denim and T-shirt store she opened in 1991 on Haight Street in San Francisco “foundational to streetwear, before we even called it streetwear.” For Vivier, who launched her brand in 2012 and is partnered with Shinola-owner Bedrock Manufacturing, Kim is an L.A. hometown hero and sounding board.

WWD FaceTimed with the two friends to discuss their collection, leaning on each other for advice during the pandemic, what’s been working and what’s not, and how they see the future of fashion in L.A.

WWD: How did you two meet?

Clare Vivier: At a DeRay McKeeson book launch party. Bobby made the T-shirts for the event and I said, “Who is this guy and why do I see him on all my friends’ Instagrams?” Then we reached out to one another.

Bobby Kim: Both of us starting out in L.A. in the same era of makers and entrepreneurs, she was always around, and my wife is super into her brand and was always educating me about it. There are so many parallels…but when it came to collaborating, it was still kind of a courtship, I was so nervous of the rejection…

B.K.: Our paths and careers in terms of bootstrapping it, building the brands, building communities, doing fun collaborations, having this signature aesthetic people recognize. Then Clare and I as people and our perspective on things. Right when we signed onto this call, I said her outfit is so cool. Everyone loves how she dresses. As far as the product we make, they are two divergent worlds, but when we started embarking on this collaboration process a year-and-a-half ago, we were noticing that even within our world of young streetwear guys hanging out on Fairfax, the cross-body or side bag or fanny pack, that piece has been prevalent for five or six years to the point where we’re like, it’s normal, there’s no difference between a men’s and women’s bag. It’s a functional piece, I wear one every day so why can’t we make one that’s made by Clare who is an expert?

C.V.: We’re both very colorful and community-oriented, like two sides of the same Los Angeles coin. The Hundreds does so many collaborations and are masters at finding connections to whatever they’re collaborating with, whether it’s some favorite movie from our youth, or a band, and I love that he picked new things out of my brand. I’m fascinated with typeface and always photographing signs when I travel, and his team put a spin on it and made it resemble the L.A. culture of sign painting.

B.K.: We had so many ideas and concepts, we could have made an entire new brand.

WWD: There is still time.

Clare Vivier and Bobby Kim of The Hundreds launch their first collaboration.  Courtesy

WWD: How have you leaned on each other during the pandemic?

C.V.: As soon as lockdown happened, we called each other and said, “WTF, man! What’s going to happen to our businesses, our rent, our employees?” We needed each other and thank god we had each other because I don’t know what we would have done without it. We were texting each other frequently at midnight.

B.K.: About PPP loans, shipping, furloughs, this was the conversation in March when things were looking pretty bleak.

WWD: How are you feeling about business now?

B.K.: The darkness is still surrounding and awaiting…it took us time to settle and have realistic expectations that this will last a long time, we have to conserve and be mindful and responsible in how we run these businesses.

C.V.: We were both heading into our biggest years ever, so it was a real crash. I still have PTSD and continually wait for the other shoe to fall, but at the same time keep going, which is how I have always done things. When I started, I wasn’t venture-backed and didn’t have capital. It’s about going back to those roots.

B.K.: We have all had to be so innovative and push our creative limits for how we run these businesses with new marketplaces and customer interactions. I’m so much more appreciative — the wins mean more now. I’m grateful our communities are still there and interested. There is a lot of unemployment money floating around, so our customer has been there and they don’t really have anywhere else to spend their money now, they are home and online so they are more attuned to e-commerce, that works to our benefit. 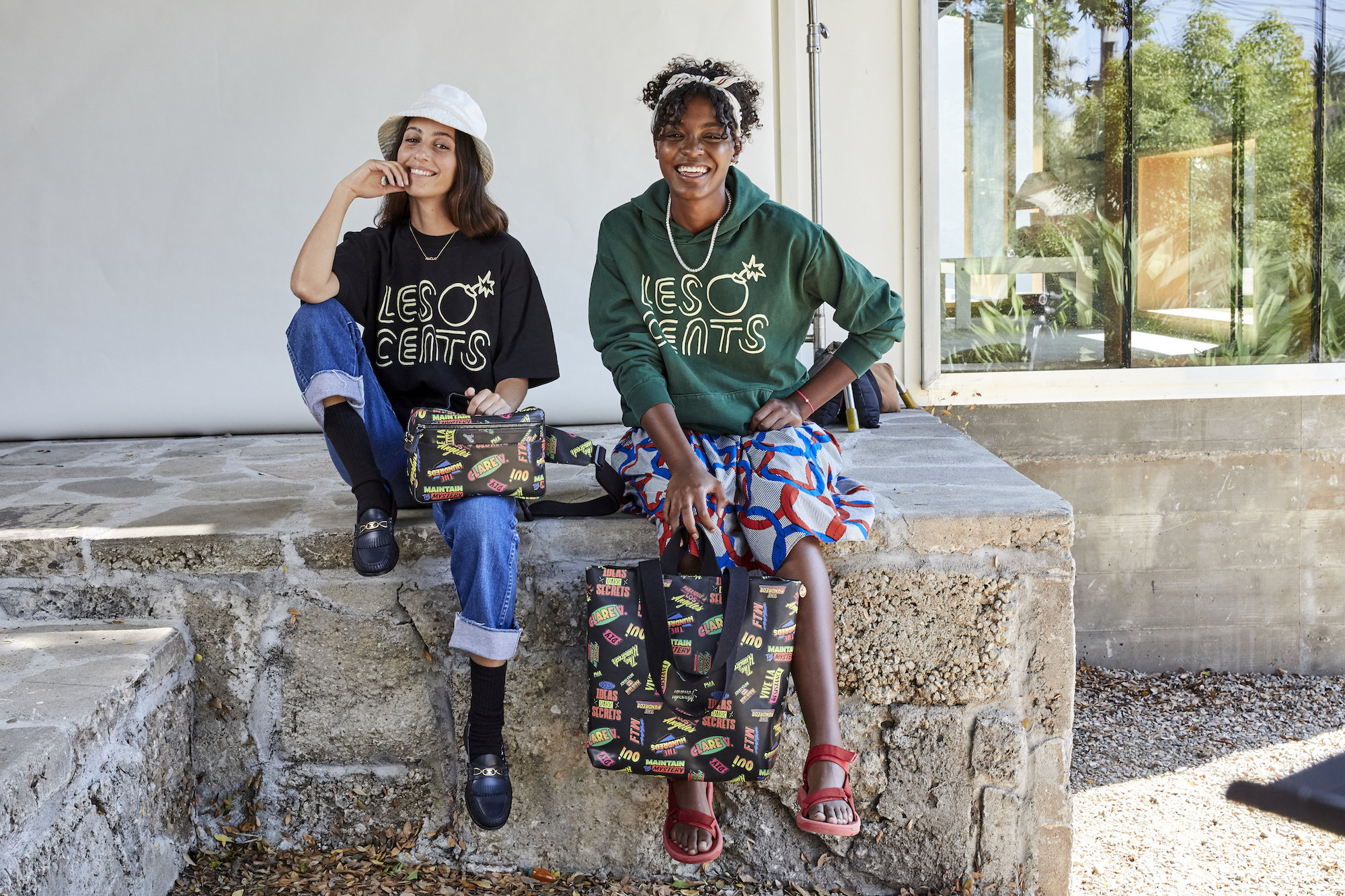 WWD: Are your sales back to where they were last year at this time?

B.K.: Our wholesale is done, it’s gone, but our online business has almost compensated for that. Our projects sell out sometimes within a minute or seconds. That’s never happened at the consistency and volume it has now. I don’t know how long that’s going to last though.

C.V.: Our wholesale is not gone, some of our best partners like Nordstrom, Anthropologie and Shopbop, are still going strong. It has been reduced, but what has affected us is our eight stores being closed for a portion of this time, and now just allowing one person in at a time and people not being comfortable going in shopping. But our e-commerce is doing well and compensating for a lot of the loss, but not completely.

B.K.: Our store on Fairfax Avenue just reopened, about two weeks ago, it’s doing well, which is strange. Fairfax is kind of working even though most of the stores there aren’t open. Foot traffic is way down but people who are coming are coming to buy, not hang out. That’s different for Fairfax.

C.V.: We just opened a store unexpectedly in Montecito [a neighborhood in Santa Barbara] because that’s where people are, it’s going to where our customers are.

C.V.: We have learned how to pivot quickly. Workbags are not selling because people aren’t going to work, so how about pivoting more to apparel, like sweatshirts and wear-at-home dresses. Bobby and I both have very nimble companies.

WWD: Is some of that ability to pivot made possible by manufacturing in L.A.?

C.V.: One hundred percent, everything is made here. Without that, I don’t want to think about what it would have been like relying on things coming from overseas in China or India or Italy. We are very grateful we have production in Los Angeles.

WWD: What’s been selling and what’s been working in the way you’ve been engaging with your customers?

B.K.: For us, what’s been selling is stuff that’s comfortable, feels nostalgic, is sentimental and familiar. We do a lot of licensed product, and even within the brand, when we bring back old stuff that’s been successful. We have a live show called “Hundreds TV” that’s kind of like the Home Shopping Network and we’ve brought back archival pieces. People love that. Right now, people want to go back to what they grew up wearing because it reminds them of a safer, more secure pre-pandemic time.

C.V.: In terms of social media and content, my design director Greta and I started something called “Le Cute Show” on Instagram Live where we talk about new product and make fun of ourselves for calling everything cute. That’s gotten a great reaction. It’s a colorful and warm and distracting show. People want to be distracted. For content on the feed, I’ve stayed with outfits and things true to me. But there is a wider world and I don’t want to pretend it’s not happening, so when I’m called to react to something personally, whether it’s the George Floyd killing or the protests, if I feel emotional that I should react, I will do that, and people can tell when it feels real rather than posting a black square.

WWD: Looking at the wreckage of the industry, how are you feeling about L.A. as a place to be in fashion now?

B.K.: In my world there has been a swell and movement around Black-owned streetwear brands. Even if they are garage start-up T-shirt brands, there are a lot of them and they are great. That to me is encouraging and exciting. In the larger men’s wear world, Jerry Lorenzo just dropped his next collection, and it’s beautiful, I was super inspired by that. So high and low, L.A. is doing it still.

WWD: I feel like there is something to the rise of the amateur designer, and the creative spirit of just trying something, that seems to be resonating with people more now than the glossy, branded, sell-it-to-us-hard-every-five-minutes approach. It feels like there is an interest in local, personal, who you know.

B.K.: Yes, that feels like it’s happening worldwide, the feeling of being more mindful of our own communities and people in our own backyards doing phenomenal work that need support. And all the paradigms are shifting, the rules are broken. Young brands come to me for advice all the time and this is the most fun time because everything goes.