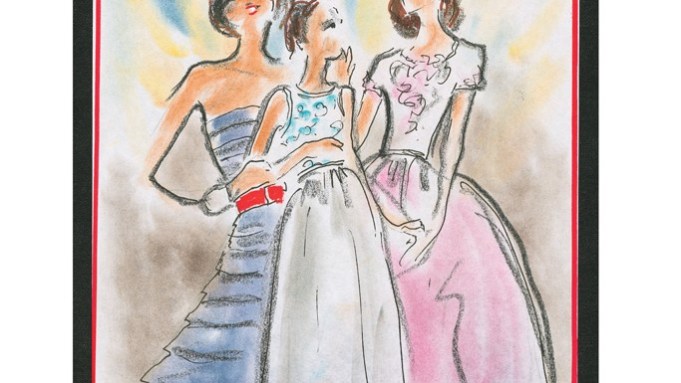 Designers in the running to dress Michelle Obama for Monday night’s inaugural balls aren’t about to go on the record about what they’ve sent.

But it’s safe to say the First Lady has plenty of options — as do the first daughters, Malia and Sasha. Just take a look at these exclusive sketches WWD culled from various designers whom we asked to propose an idea for the big night. Some suggested looks for the daughters as well as for Mrs. Obama; Tommy Hilfiger actually chose to only focus on the younger set. “My designs for the first daughters are inspired by American spirit with bold pops of color in classic red, white and blue,” he said. “Sasha’s cropped tux jacket over an A-line silk dress takes a youthful twist on her mother’s classic style. Malia has great style, and I thought it would be fun to see her in a fashion-forward tuxedo jumpsuit.”

RELATED STORY: Designers Rumored to Be in the Running >>

Mum’s the word on what the siblings will actually wear (in the past they’ve appeared in such labels as Chris Benz, Anthropologie, ASOS and Zara), and the same goes for President Obama. Representatives for both Hart Schaffner Marx — his go-to brand — and Brooks Brothers confirmed that they were not approached to provide suits for the President. The going theory is that, given the economy, he may take the conservative route and wear something he already owns.

As for the First Lady, she might be taking a few pointers from A-list actresses who typically choose from 50-plus gowns for the Oscars. Nearly 20 designers are believed to have sent clothes for this weekend’s festivities in response to requests from East Wing staffers. Those names include Michael Kors, Derek Lam, Naeem Khan, Marchesa’s Georgina Chapman and Keren Craig, Prabal Gurung, Jason Wu, Bibhu Mohapatra, Thakoon Panichgul, Tracy Reese, Chris Benz, Tory Burch, Narciso Rodriguez, Zac Posen, Maria Cornejo, Thom Browne, Barbara Tfank and Laura Smalls. Odds are the first eight companies on that list are the more likely contenders to design the First Lady’s gown, but there very well may be other candidates. And don’t rule out a hundred-to-one-shot dark horse. Wu seized the honor in 2009 and soon after cannonballed into fame.

However transparent the Obama administration vows to be, FLOTUS seems to have the fashion world buttoned-up when it comes to her favorite designers. While a few fashion insiders alluded to signed confidentiality agreements, one or two went so far as to refer to Mrs. O as “a client.” All of the industry sources contacted by WWD said they — like the rest of America — will not know what the First Lady decides on until she steps out for the Commander in Chief’s Inaugural Ball Monday night.

Democratic as she is about fashion, Obama is not one to rely on any one designer or to repeat outfits. That said, the First Lady (who turns 49 today) will no doubt make the most of all her designer options during this weekend’s many photo-ops.

After Saturday’s National Day of Service appearance, she will host the Kids’ Inaugural Concert where Alicia Keys, Katy Perry and Usher will be among the performers. The dress code for President Obama’s official swearing-in ceremony Sunday in the Blue Room will no doubt be a bit more polished, ditto for the ceremonial swearing-in ceremony that will be held outside the Capitol Monday afternoon. Once the first family has made tracks in the inaugural parade, it will be back to 1600 Pennsylvania Avenue for a quick black-tie wardrobe change for the Beltway’s biggest night of parties. And by the time the First Lady does make her choice known, one designer will certainly have reason to celebrate.