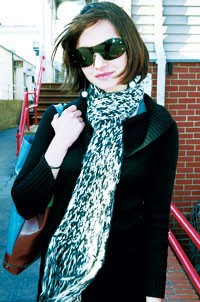 There’s liberal thinking. And then there’s Brown, which took a running start before diving off the left side of the political spectrum. Tucked into the the pretty city of Providence, R.I., this is where students can major in Contemplative Studies. So if you can study “thinking” here, clearly an academic look at fashion isn’t too crazy a notion. Indeed, the university currently offers 20th Century Design and Construction, which focuses on the history of the couture.

But to the prospective student, Brown’s fashion curriculum starts before a single syllabus gets passed out. Just take a walk around campus. On a sunny day, groups of well-shod kids cluster on the steps outside Faunce House, the campus’ main activities hub. Faunce looks out on College Green, where sidewalks act like criss-crossing runways for downtown New York-looking hipsters, stiletto-clad sophisticates, California dreamers, Ugg-and-miniskirt flirts and patchworked bohemians as well as men who work granddaddy chic better than, well, Grandaddy (both the band and family member). Then there are the “Euros,” the international students who, according to the non-Euros, are easily identified by the tight jeans — “to better accentuate a great butt,” notes one shy freshman — and an all-round sleeker look.

Brownies think of themselves as the “artsiest” of the elite eight. This is in no small part due to the school’s proximity to the Rhode Island School of Design, literally a two-minute walk away. Both schools have an open border policy in terms of sharing classes, and many Brown students also take style cues from their edgier, visionary RISD neighbors. “I take it as a compliment if someone thinks I’m from RISD,” says junior Marjon Carlos.

Carlos, who writes fashion columns for the school’s Daily Herald, hails from Dallas, where she would never have left her house with her curly hair curly. “Once I got here, I started letting it go. I realized I didn’t have to keep it straight; it was liberating,” she says, noting that it was the school’s come-as-you-are vibe that changed her mind. Her friends quickly chime in that Carlos’ natural look is “fierce,” “cool,” “hot.” Others have similar tales of stepping up their personal expression or changing style once stepping onto campus.

Brown students can riff on fashion with confidence, not worried that it’s too frivolous or shallow a subject. When prompted, a group of friends will debate whether fashion’s newest talents — Proenza Schouler and Zac Posen — will stand the test of time, if Tom Ford leaving Gucci Group heralds the end of women’s fashion as we know it or if metrosexuality has caused the “gay-ification” of certain men’s magazines.

“It felt very validating to discuss fashion as an intellectual, ‘semiotic’ construct,” says senior Naia Cucukov. Yet there’s no sense that these students take themselves too seriously. They’re quick to admit that they read Us magazine, that Jessica Simpson is entertaining if not one inch deep, that pop culture is fascinating in all its forms. For them, pursuing fashion post-graduation is not a waste of an Ivy education, as long as, of course, they’re the best at whatever they do.

“Other kids don’t dress or think like this,” says junior Jesse Finkelstein. “We’re a bit more fun and free, more expressive. That definitely attracted me to the school.”

As senior Mandy Tang puts it, comparing Brown to the rest of the Ivies, “There are more dreads and mohawks per capita here.”

Classics 101: Hipster Eighties redux, whether you’re from Montana or Manhattan.
Best fashion moment: Fashion’s grandmaster André Leon Talley received his master’s in French here.
Chic alumni: John F. Kennedy Jr., Eliza Reed Bolen, Alexandra Miller, Alex von Furstenberg, Tracee Ellis Ross.
If your school were a designer, who would it be? “Marc Jacobs,” according to at least 50 students.
If you were reading Vogue before you got to class, would you hide it when you got there? “No, but the mountain-hiking vegan anti-Bush leftists might give me a strange look.” — Mandy Tang, ’04