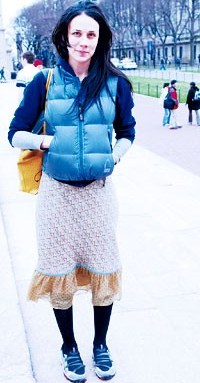 Since fashion reaches its peak in New York City, it’s only natural that Columbia University, ensconced in upper Manhattan, teems with an urban chic student body. This Ivy enclave surrounded by the increasingly gentrified streets of Harlem is clearly a draw for students keen on exploring the vast offerings of the city — art, culture, cuisine and, of course, fashion.

While some students wear only sweats to class and rarely venture below 110th Street, there’s also a faction of hipsters with a precocious knowledge of fashion. They shop at Barneys and Bendel’s, frequent Next Door Nobu and Da Silvano, and are regulars at Bungalow 8 and Plaid. Indeed, their lifestyle rosters read more fashionista than freshman.

“There’s an emphasis on multiculturalism, on blending and assembling styles from different cultures,” explains Keelin McDonell, a senior who counts Prada and Carolina Herrera as her favorite designers. “You don’t see a lot of little Chanel jackets, but you see trend items or specific runway looks that people have co-opted into their wardrobes in a less fashion-y, more cultural manner.”

Students waver on the subject of their school’s fashion quotient with some naysayers dissing their fellow scholars’ style. “Essentially everyone here’s a dork, even the cool ones,” says Mexico City native Yago

Amerlinck-Huerta. “Fashion here is rather nonexistent. It’s not like NYU.”

Yet judging by the varied and yet spot-on looks being sported by classgoers on a recent April afternoon, the student body in general is fairly stylish, but diverse and hard to categorize. Looks run the gamut from takes on the chic Connecticut soccer mom (worn button-downs, shrunken blazers and L.L. Bean totes) to vintage vixen (razored minis, neon-colored tights and chipped nail polish). Fashions were accessorized with everything from cork wedges and pointy flats to Converse sneakers and Uggs. Other popular accoutrements include backpacks, natch, and fabric totes. Designer handbags rarely make their way to class, but rest assured the women here know their stuff. Barnard junior Megan Bailey, for example, is amping for a custom-made Goyard bag replete with customized stripes and initials.

Still, individuality rules. “There are a few Louis Vuitton ‘speedy’ bags on campus, but other than that it’s more about putting items together to create your own look than trying to wear a whole [head-to-toe] designer outfit,” says McDonell.

himself an individualist, and indeed his fashion choices reflect that. “I tend to go with offbeat, smaller designers that you’ll find at Forward,” says Brown, a devotee of the downtown boutique. “I’m not a fan of the mass-marketed product, but I’m a sucker for Tom Ford.” However, Brown’s love of fashion isn’t a recent affliction.

“I think I was the only one rockin’ a Burberry trench at age six.”

Classics 101: Vintage, vintage, vintage; Converse sneakers, hoodies and anything that reads effortless urban chic.
Best undercover fashion moment: “Mona Lisa Smile” was about Wellesley, but some scenes were filmed at Columbia.
Chic alumni: Maggie Gyllenhaal, Cynthia Nixon, Julia Stiles, Anna Paquin, Lauryn Hill, Eileen Ford, Cecilia Dean.
If your school were a designer, who would it be? “Marc Jacobs. He has had an unbelievable influence. More than any designer I’ve seen.” — Keelin McDonell, ’04