The Juicy Couture Girl Grows Up

President and chief creative officer LeAnn Nealz will show the spring collection, marking her first full collection since she joined the firm almost a year ago. 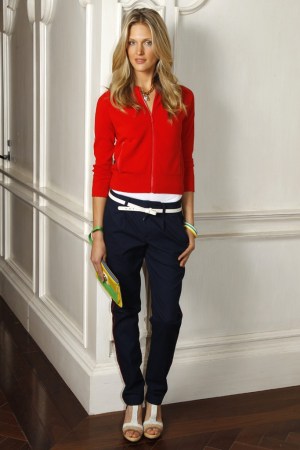 The velour tracksuit. It’s been key to the Juicy Couture story since the label launched in 1996, and now it’s serving as a jumping-off point for the new regime led by president and chief creative officer LeAnn Nealz.

Tonight, Nealz will show the spring lineup at Academy Mansion on East 63rd Street in Manhattan, marking her first full collection at Juicy since she joined the firm from American Eagle Outfitters Inc. almost a year ago. “We have been exploring what the track means outside of sweats, which is a big part of the brand,” Nealz said. “But now it’s taking sports influences and updating and modernizing them.” Don’t expect a radical makeover, though. Nealz sees this effort as a subtle elevation of Juicy, which she plans to further refine in future seasons.

The shift comes at a crucial point for the company, which is a division of Liz Claiborne Inc. and is in turnaround mode. While Juicy is still considered Claiborne’s most profitable brand, it has struggled to maintain momentum and suffered from an identity crisis and subsequent retail woes since founders Pamela Skaist-Levy and Gela Nash-Taylor left in January 2010.

It’s a predicament not unfamiliar to William L. McComb, Liz Claiborne Inc. chief executive officer. “Juicy shot out of a cannon. In addition to being very well known, it is very well liked. But the business itself experienced growing pains,” he said. “The turnaround we are undertaking addresses those growing pains and, frankly, looks and feels a lot like what we went through at Kate Spade just three years ago. The analogy is perfect: a great brand, a global footprint, a lifestyle brand, but one that stood still for too long. So now we are rebuilding it from a business perspective.”

Part of that plan, according to Nealz, was to do away with some of the logo-driven product. “We needed to clean that up,” she said. “It shouldn’t say Juicy Couture on everything from handbags to sweat suits.” That’s not to say that Nealz is forsaking the brand’s playful spirit. “There was always a flirtiness to it that I feel was important, but it was time to move it forward,” she added. “It had gotten too young. My focus is really to grow her up and elevate the brand in all aspects of design. Juicy needs to be more sophisticated and a bit sexier, but keep the kind of flirtiness that makes it fun.”

Nealz has also begun updating the fabrics and finishes (better quality cottons and laces, Italian yarns, scalloped linings in some jackets), working closely with her design teams — clothes in Los Angeles and accessories in New York — to bring a stronger sense of consistency between all categories. “I just feel like there wasn’t anyone watching over for a while,” Nealz said. “We had great heritage to build on but it hadn’t moved on. That is the challenge — to get people really interested in the brand again and introduce it to new people as well. I think a lot of people had walked away.”

The spring collection, to be presented in a set created by Stefan Beckman and inspired by the legendary Chateau Marmont hotel in West Hollywood, has a sporty feel, with tennis influences in short dresses and miniskirts. There are also knitted V-neck tops, a beige cardigan with a contrast yellow mohair trim, a white lace frock in an engineered poppy motif and a maxidress made from mixed and matched silk scarves. In a nod to the surfing culture of Los Angeles, the hometown of Skaist-Levy and Nash-Taylor, the accessories include a group of ultralight Neoprene bags.

Many of the brand’s 77 freestanding stores are also being updated to reflect the changes. “We are ‘re-Couturing’ our stores,” Nealz said. “We started redoing some with a whole new concept, which is lighter, brighter and more like walking into a girl’s apartment.” The just-opened Beijing boutique, for instance, was done in a pink, yellow gold and cerulean blue palette, with a prominent central staircase and a large chandelier.

While Nealz envisions a greater fashion concept for Juicy — denim is in the works, along with a bigger assortment of dresses and accessories — she said there will always be room for a tracksuit. “I don’t know that that’s a bad thing, but I think it’s important that we reinterpret and modernize it,” she contended. “We all want to be comfortable. We all want to hang out. It’s still relevant.” After all, she added, “It is our heritage.”