The Land of Edun 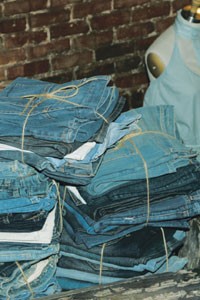 With friends Lou Reed and Minnie Driver on hand to help celebrate, Hewson and Gregory — with plenty of input from Hewson’s husband, Bono, and their teenage daughters, Jordan and Eve — worked a louche, laid-back attitude rendered in whispery pale chiffon tops and beat-up denim. Except for a bright yellow coat, earthy florals and subtle men’s wear patterns reigned.

Hewson said she was pleased that the Edun customer seems to be getting the label’s mission: bringing trade, as opposed to just aid, to the developing world, “to help deliver the fishing rod rather than the fish,” according to a company statement.

“People want to know what they’re putting on their bodies,” Hewson said, “and these clothes have a good story behind them.”

Manufactured in Africa, South America and India, the collection is available at select American stores, including Barneys New York, Saks Fifth Avenue, Steven Alan, Ron Herman at Fred Segal and, new for spring, Nordstrom. The clothes wholesale at $22 to $160 for T-shirts and blouses, $65 for jeans and $160 for outerwear.

Hewson and Gregory discussed future growth, including the possibility of an ad campaign and freestanding stores. “That’s a natural progression for us,” said Gregory. “It’s the best way to express a brand.” Don’t expect a fancy, flashy runway show, though. “We’re going to do a mixture of things,” said Hewson, hinting that a more civilized, party-like presentation may be in the works. “We don’t want to be tied down to any one thing.”