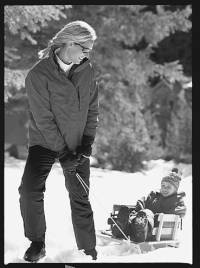 NEW YORK — Instead of churning out heavyweight jackets and sweaters, ski and snowboard companies are diversifying their lines by adding more seasonless items that aren’t so reliant on a major snowfall.

Last winter’s mild temperatures and limited snowfall took its toll on business, and companies are approaching the upcoming season with some caution and a few backup plans. Adding to the problem is the ongoing drought in certain areas — the Colorado River is at its lowest point in 130 years — complicating the prospect of snowmaking.

The numerous options consumers have for winter activities are also affecting the nearly $663 million ski and snowboard apparel wholesale sector, said David Ingemie, president of Ski Industries of America, a trade association represents 800 manufacturers and suppliers to the winter sporting goods industry. Season-pass holders and devoted winter sport fans are not spending as many days each year on the slopes as they did a few years ago.

In addition, apparel makers are branching out into other categories to control costs and limit risks, Ingemie said.

“Production costs too much not to get one more turn,” Ingemie said. “It’s more about business cycles and market share than the weather.”

He said layering, a concept that has blanketed the outerwear and outdoor markets in recent years, evolved from that business cycle more than weather patterns. Columbia Sportswear and Burton are successfully broadening their distribution and product categories, and Salomon, Rossignol, Orage and Betty Rides are ones to watch for fashion direction and increased sales, Ingemie said.

Kim Speed, apparel manager for Salomon said, “People really don’t need as much protection as they used to need. Right now, the trend is for soft, technical things that allow motion and breathability. The whole trend is toward lifestyle and versatility. Now you see the seasons blending into each other. Merchandise can be carried from spring to fall and fall to spring.”

For Salomon, the unseasonable weather has been a factor in the development of the brand’s STL, or soft technical layers, and Somatic, which are breathable shell jackets geared for free-riders made from Gore fabrics. Buyers will get their first look at Salomon’s Somatic jackets and pants next month and the group ships to stores in August, Speed said.

Sandra Rossi, senior product developer for L.L. Bean, said last winter’s mildness may be a plus for this year’s business. It encouraged many shoppers to hold off on buying a new winter jacket, so they are ready this year. Three-in-one jackets, outerwear that allows consumers to regulate their body temperatures, have been popular at the $89, $149 and $350 price points since the company shipped its first fall catalog in July.

“Even if it’s 80 degrees outside, they know they need a new winter jacket,” Rossi said. “People in the Northeast and along the Eastern seaboard especially would rather be prepared when the seasons finally do change.”

Should this winter not be a frosty one, L.L. Bean might add some transitional pieces to its upcoming catalogs, but no fundamental changes are planned, Rossi said.

In March, Burton launches Korda, a line of off-the-slopes sportswear, at select specialty stores. The collection includes pants, lightweight jackets, shirts and accessories, and is designed to be worn year-round.

To accommodate shoppers who just don’t need bulky parkas, Burton is offering two lighterweight styles priced slightly lower than the bulk of its line. Two of this winter’s early bestsellers are the $150 hooded Formula jacket in a diamond-pattern ripstop nylon, and a $120 Radar simple, lightweight jacket. Most Burton jackets retail from $180 to $250.

John Colonna, outerwear category manager, said, “We wanted to enter price points we weren’t hitting before. We anticipate the volume increasing significantly because this is new for us.”

Arc’teryx, a highly technical label popular with climbers and purchased in January by Adidas-Salomon AG, is banking Gore-Tex, Polartec, and versatile fabrics from Schoeller to attract more snowboarders and skiers. Last year, Laura Holding joined the company to redesign the women’s line to improve the fit and style. At the Outdoor Retailer show in August, the company unveiled a more fashionable 19-piece collection, including shorts, pants, pullovers, hoodies and windbreakers.

An Arc’teryx spokesman said, “This year, the focus is on style — items you can take out of the outdoor specialty stores and put on Fifth Avenue without looking like you just came down from climbing.”

Known for being a traditional ski company, Nils, a Costa Mesa, Calif.-based label, is trying to broaden its reach by revamping its sport line to attract the next generation of skiers. The company has tapped Amahlia Stevens, the designer behind Vitamin A’s stylish bikinis, to develop its sweaters, fleece pieces, jackets, long underwear and ski pants with a more technical slant. Outerwear will have such accents as seam-sealed zippers, a pocket for CD players, pit zips and powder skirts.

Next year, Nils plans to use special displays and signs to tout the new features of its sport line, said Heidi Andrade, marketing service manager.

Under Armour, a Baltimore-based company, has found a niche. After suiting up the U.S. Olympic ski team with mock turtlenecks and leggings at this year’s Winter Olympics, the brand signed a four-year deal with the group that expires after the 2006 Olympics.

The $60 million company offers five groups — cold for cold weather activities, hot for warmer climates, all-season for year-round, street for casualwear, and loose for lounging around. Sales of Under Armour’s cold products are among the brand’s top sellers, said Kevin Plank, president. The brand also has the advantage of providing layers that many snowboarders and skiers see as essentials, and only remove when the weather warms up.