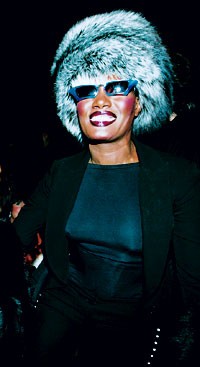 NEW YORK — Fur’s status as a fashion trend of the past five years has had a rejuvenating effect on the industry, perhaps to the point of overexposure.

During the recent presentations of the fall collections in New York, London, Milan and Paris, fur was everywhere on the runways, and because it was cold out and fur was fashionable, it was all over the audience, as well.

At Catherine Malandrino’s show in February, guests wore fur boots, scarves and vests, and one woman showed up wearing a giant fur Cossack hat — nearly identical, it turned out, to the ones worn by several models in Malandrino’s show, as well as those of Michael Kors and DSquared later on. Fur is reaching a wider audience, too, although not always with the benefit of a stylist, as evidenced by commuters barreling through Manhattan in rain-soaked minks, thinking nothing of rubbing up against their fellow travelers in crowded subways or elevators.

It’s enough to make one wonder, if fur is a fashion trend, will the trend end?

The answer, according to designers and retailers who have brought fur into their collections or stores in recent seasons, appears to be “no time soon.” That is in large part thanks to the widespread use of fur in nontraditional ways, such as a trim, on accessories, knit into sweaters or lining a raincoat — rather than the age-old full-length mink.

By treating fur as a fabric, much like luxury cashmere or silk, the purveyors of fur are giving the revival of their medium a much longer shelf life, and also creating a series of mini trends within furs, like bright beaver-lined jean jackets (fall 2000) or fur-fringed handbags (fall 2002) or the unrivaled fur look of this past winter, the leopard-like Lippi cat jacket.

“Fur was so prolific on the runways and I mean just everywhere,” said Robert Burke, vice president and senior fashion director at Bergdorf Goodman. “Fur has more longevity now as a trend than it ever has in the past, and the reason is that it is being treated as a fabric and not in the traditional way it had been in the past. Whether it is sheared, knitted or is being used to trim a pair of stilettos, the result is that you have more flexibility than you ever had before.”

The traditional fur houses of Seventh Avenue have made impressive advancements with the design of their licensed collections in recent years, creating some of the extravagant fur looks that end up in collections as varied as those of Oscar de la Renta (made by Alixandre) or Michael Kors (by Pologeorgis). Kors showed mink ponchos and handbags trimmed with knotted-mink fringe that trailed all the way to the floor. Balenciaga showed boots lined with Mongolian lamb and Marc Jacobs trimmed his Scottish Highlands-themed collection for Louis Vuitton with ermine collars.

Anna Sui explored the medium for fall in a collaboration with Adrienne Landau, who specializes in fur accessories and knitted fur. Sui had seen her work at various stores and sought out Landau’s expertise to design six colorful, knitted fox coats for her show.

“Everyone has been curious about furs for the last few seasons and when I saw Adrienne’s knitted furs I thought this is the one everyone’s going to get,” Sui said. “What I like about them is that you don’t have the heaviness of traditional fur coats. Everyone is looking for a lighter version. In London, they’re buying vintage coats, ripping out the linings and just wearing the pelts themselves. This is a cleaner version.”

It’s also a version that takes a decidedly different attitude toward fur than has traditionally been the case. In the mid- to late 20th century, it was an American stereotype for women to wait for the day their husbands (or whoever) would buy them a mink coat, a status symbol of achievement and wealth. Following a deep recession in the fur industry during the 1980s, led by changing attitudes toward the subject, furriers came up with a new strategy of developing collections with designer labels and new approaches to fur to redevelop consumer interest.

The results have been increasingly successful, drawing a new generation of consumers to wear furs that are more fitted, shorter, sportier and often, less obviously fur. Accessories — like collars, scarves, fur rosette brooches and capelettes — has also been a growing category for fur design, as it represents an easier point of access for customers who are unaccustomed to wearing fur or who don’t want to look like their mothers.

This all adds up to an important distinction in the generational attitudes of consumers toward fur, as the younger consumers are not looking at mink or sable as luxury status products, but as fashion.

“It’s a different attitude toward fur right now,” said Sui. “It’s not like buying a Cadillac or a dress-up thing, or where you feel like you’re the Barbie Prom Queen. Young women are finding the glamour of fur, but they are responding to what is deconstructed.”

While there remains a market for the full-length mink and sable business, vendors are making more space in their showrooms for unconventional collections. Alixandre is launching a line of fur-trimmed rainwear for fall designed by Jane Charney Lipman, the founding designer of Drizzle rainwear.

Under the Jane Charney for Alixandre label, Charney designed several styles that recall her signature double-coat looks. Most pieces are lined with rabbit, or French lapin, as it is called at Alixandre, even though the pelts come from a farm in Spain. Styles, which wholesale from $650 to $1,950, include traditional wool gabardine silhouettes lined in leopard printed lapin; a double-coat consisting of a polyurethane topper that looks like patent leather and a shearling base that reverses to show a hide treated so that it appears to have been dappled with rain drops (available in ivory or burgundy); a black watch plaid coat lined with dark lapin and trimmed with velvet on the undercollar and inside pockets, and classic wool gabardine styles with fox cuffs.

“It doesn’t need to look like you took your mother’s mink coat and turned it into a raincoat,” said Lawrence Schulman, president of Alixandre. “I hope we’ve moved past that.”

Charney said she was eager to adapt her outerwear skills with a new material after reviewing the fall shows.

“Every collection had fur in it,” she said. “It’s glamorous, it’s wonderful. There’s nothing more flattering around a woman’s face than fur. It’s about time we got back into a little bit of femininity.”

Fur also got a boost from fashion designers’ current fascination with the Thirties and Forties, and the return of the Lippi cat plays right into the prim sophistication of the era. What the fall collections — and the audiences attending them —?proved is that there is still room for fur to grow as a fashion trend, and perhaps become even more widespread, even to places where it maybe shouldn’t go.

“Fashion trends always come and go in cycles, but I still think there’s some longevity in fur,” said Burke, who downplayed any concerns that widespread acceptance would have any impact on accelerating fur’s pro-fashion cycle. “Are there some people who are buying short skirts who should not? Definitely, but that’s just the pitfalls of fashion.”