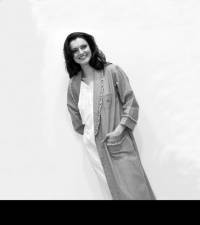 NEW YORK — This month’s drawn-out fall market will have to wait until next month or beyond for final judgement.

Because of the dismal retail climate and sour economic outlook, the Jan. 6-10 market, which traditionally is dedicated to sleepwear, robes, at-homewear and warmwear, expanded into a two-to-three-week affair.

Even though the turnout was strong from major department and specialty stores, and smaller specialty operations, the bulk of orders are not expected to be completed until mid-February. In the meantime, retailers were writing orders for immediate merchandise, shoring up on replenishment items and focusing on the hot daywear category.

The bottleneck is being created by major stores not finalizing their fall budgets and merchandising plans, as they evaluate consumer trends and economic conditions. As a result, fear is growing among vendors over the prospect that a number of brands that have not performed this past fall and holiday will be eliminated from buyers’ budgets.

The anticipated fallout of labels from the difficult fourth quarter is proving to be an incentive and a disadvantage for resources: Department stores generally allocate 40 to 70 percent of their open-to-buy budgets for private label innerwear, primarily sleepwear. Private label programs have intensified in the past couple of years, in some cases doubled, forcing manufacturers of branded goods to become more creative with new products, as well as compliant with markdown money and chargebacks.

In response to the lingering malaise at retail, several vendors introduced new designer collections of dual-purpose at-homewear, such as the licensed Bill Blass Lifestyle and Dockers at NAP Inc., and sleepwear and at-homewear by Lauren by Ralph Lauren at Carole Hochman Designs Inc. Madison Maidens launched a daywear line under the licensed Jones New York label and expanded daywear and sleepwear bearing the new Via Nicci name.

Caetano said the survival of a brand in the current marketplace depends on several factors. “A retailer can’t walk away from a brand that generates sizeable volume. There could be environmental reasons a brand isn’t working, such as the economy, shipping or because the product just isn’t right,” she said.

Donna Wolff, vice president and divisional merchandise manager of intimate apparel and hosiery at Bloomingdale’s, said, “We haven’t gotten fall ’03 plans finalized yet. We need time to look at the whole picture.”

Regarding private label, Wolff said, “We are definitely a brand-driven bridge department store. Yes, I think the Bloomingdale’s name is an important and powerful name, but you can’t overlook the importance of a limited distribution brand. We are introducing Diesel daywear this month and all of the branded business we do with Calvin Klein Underwear, DKNY Underwear, Oscar de la Renta sleepwear, Natori and Josie daywear and sleepwear and Cosabella has been terrific.”

She said that Bloomingdale’s will be testing Via Nicci this spring in five units.

Looking at the private label problem, Howard Radziminsky, senior vice president of sales and merchandising at Movie Star Inc., said, “It’s a growing thing. Private label used to account for 20 to 30 percent of budgets. Unfortunately, we’re the sellers and they’re the buyers, which is why people keep falling out.”

Brian Killeen, president of Willow Creek, said, “There’s still a lot of open-to-buy dollars, but retailers are being very cautious.”

David Martino, president and chief executive officer of Russell-Newman Inc., maker of Cypress Apparel and the licensed Laura Ashley sleepwear, said, “Private label still is a major issue to deal with. But we also do a big private label business and it’s helped us stay competitive. It’s very tough out there and we have to fight for the business. But retailers have had their issues with margins, too.”

Jim Noble, senior vice president and general merchandise manager for the Jockey brand at Jockey International, said the company got a jump-start on fall 2003 in August and September. “Now, one-half of spring 2004 has been shown,” he said. “We’re not missing the trends and we’ve been very accurate in our forecasting.”

He added that a new Lycra-blend bra called The Bra with a Memory has been a big hit. Deliveries are slated for February.

“The cup bounces back to a moldable shape after being squashed,” Noble said. “It’s great for travel. Now, we’re developing a similar idea, a seamless supporter for a man’s boxer.”

“In general, our retailers were reasonably upbeat, and that was a pleasant surprise,” said Victor Lee, president of NAP. “Retailers were mentally prepared for a soft season and it turned out OK considering the reduced expectations.”

Lee said reaction was strong to a number of novelty fabrics in the new Dockers line, including sanded twills and pointelles with front placket treatments on a variety of tops.

“The plan is to expand into daywear with camis, T-shirts and tanks of cotton and Lycra with a built-in bralet for support,” Lee said.

Jeanette Cantone, executive vice president of merchandising and design at Natori Co., said a strong fall and holiday selling season with the Natori, Josie and Cruz labels resulted in retailers “revising original plans to an aggressive mode for fall ’03.”

“Highlights included the mixing of new wear-now fabrics into key items and classifications, with an emphasis on daywear and newness in warmwear,” Cantone said.

Top ideas in the Natori black label collection included microfiber stretch jersey, burnout velvets and embroidered fishnet in body-hugging silhouettes. Colors of burnt red, prune and mauve were key in the Natori white label line in knits, while flannels and knits were strong in loungewear by Cruz, she said.

“In the Josie line, prints continue to play an important part of the dressy category, while knits such as rayon and Lycra, French terry with spandex and velours were well received in the casual category,” Cantone said.

Susan Feldman, president of sales for the Lauren by Ralph Lauren sleepwear division of Carole Hochman Designs, said, “Stores were incredibly open to the idea of a new brand. We told stores we want a minimum of two fixtures and they were very supportive of that idea. You can’t just throw a few styles together and try to make a statement.”

Carole Hochman, president and design director, said, “I think we’ve given new energy to the robe business with Ralph Lauren’s little foulard prints and chambrays for the modern woman.”

“So far, we’ve had a pretty good reception to all of our [sleepwear] brands — Aria, Planet Sleep, The Girls and the licensed Liz Claiborne and Eileen West names — because we introduced spandex for additional comfort and ease,” Komar said.