NEW YORK — As far as business goes, stormy is the forecast for outerwear makers, but like the coats they produce, companies are preparing for all the elements.

Consolidation, pressure on pricing, an influx of designer labels, the... 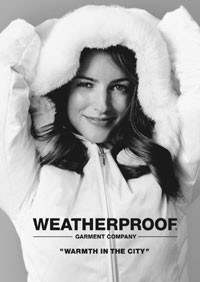 NEW YORK — As far as business goes, stormy is the forecast for outerwear makers, but like the coats they produce, companies are preparing for all the elements.

Consolidation, pressure on pricing, an influx of designer labels, the increasing importance of private label and a lack of must-have items are expected to make the business more complicated this year.

“When they went out of business, they suddenly released two or three of the best labels in town. People who didn’t get them took other labels,” Blatt said. “Many more people are licensing names and that’s already begun to affect the market.”

Among the brand developments:

The influx of labels is forcing more stores to take in first-time brands, Blatt said. The continued popularity of down coats and other casual styles is impacting other coat categories, while more coats being sold in designer sportswear shops is eating into the overall outerwear business, he said. Some chain stores are opting to get out of the outerwear segment altogether, Blatt said.

“More and more stores, especially trendier ones, are not just selling outerwear. They’re moving into sportswear to wear with outerwear,” Blatt said. “The sportswear mood for outerwear is growing quickly.”

In an unusual twist, the Kazu Apparel Group, which is owned by Lana Winer International, aims to be a sportswear label, but started with a 14-piece rainwear collection. Instead of traditional trenches and black overcoats, there are patent leather coats, canvas coats with Liberty of London print trims and a safari jacket. First-year projected wholesale volume for outerwear is about $1.25 million.

Herb Frichner, vice president of the Kazu Apparel Group, said, “The marketplace isn’t giving consumers anything exciting. They’re treating the customer like she doesn’t know what to buy or if she wants to buy. She’s almost being treated like a nonentity.”

He placed some of the blame on mass overseas production, which limits manufacturers’ ability to respond to trends. “They have to be very safe,” Frichner said. “I don’t think fashion is safe.”

Consumer fears of losing jobs due to the unsteady economy have also affected the sector’s performance. In addition, they are wary about how stores price merchandise and are more inclined to wait for markdowns or shop at discounters, Frichner added.

Apparel sales in general are somewhat depressed due partially to consumers’ uneasiness with upgraded terror alerts and the aftermath of the war in Iraq, said Jeanette Nostra, president of G-III Apparel Group. “They’re spending more money on their homes. Clothes are very much a discretionary purchase.”

The addition of outerwear to retailers’ private label assortments is helping the business, Nostra said. On average, coats comprise between 8 and 18 percent of their mix, she said.

Unlike outerwear shoppers, sportswear shoppers tend to “cruise” stores six to 15 times a year, Nostra said. Now that more coats are offered in sportswear departments, they have become more of a spontaneous purchase, she added. In the past, women went to coat departments for a destination purchase.

“There’s been a tremendous upswing for us because color is being embraced by the consumer,” she said. “There’s so much more color, especially in the wool and active areas. New life is being breathed into outerwear offerings.”

Glenn Palmer, president and chief executive officer of the Amerex Group, and Renee McGovern, president of the firm’s men’s and women’s group, agreed that manufacturers need to be “fully aligned” with stores’ shorter delivery times. Coat makers also need to respond to continued consolidation across all channels and increased private label offerings, as well as anticipate consumers’ needs and not be so price-conscious.

“We still see some stores focused on price, not products,” Palmer said. “They’re continuing to buy the best deal out there.”

London Fog, another coat maker with estimated $200 million in sales, is also looking to develop its proprietary label. Mandel is working as design director to spiff up the brand’s women’s collection. In addition to its signature collection, the brand now has a new label for city dwellers, another for the SUV crowd and a third one for luxe-minded consumers.

There is a need for more feminine coats and “feel good” garments with luxe interiors, said Richard McCaffery, president of London Fog. Double-digit percentage growth is planned for the women’s business this year, he said.

“People have expertise in leather, but not in wool,” Schwartz said. “There are too many people vying for the same pie of dollars. That’s a fact of life in the oversupplied apparel business.”

To try to differentiate its brand from competitors, Free Country, a $52 million operation, is focused on innovation. Reversible jackets, special finishes, trims and linings are some of the details the company is serving up for 2004. This year’s women’s outerwear sales are expected to exceed $18 million, compared with $15 million last year, Schwartz said. The balance is done on men’s outerwear.

Advertising remains a critical initiative for Free Country. Instead of increasing its ad budget, the company is making its ads more action-oriented. Next month, Schwartz will be shot heli-skiing for the brand’s fall ad campaign.

Free Country will also launch cold-weather accessories through a licensing deal with Drew Pearson Marketing, a Dallas-based company founded by the former NFL star. “Our game plan is diametrical to our competitors who are investing money into acquiring licenses,” Schwartz said.

The Levy Group is negotiating for new licenses and plans to diversify the company’s portfolio, according to Donald Levy, president and ceo. The company produces licensed Liz Claiborne, Dana Buchman and Esprit coats, house brands Braetan and Donnybrook outerwear, as well as Wildlife sportswear and licensed Bonjour jeans.

Stuart Pollack, president and ceo of Bernardo Fashions, is another executive who is not interested in acquiring licenses.

“Retailers want brands in stores. Branding is important, but I believe interest in designer labels has waned, not strengthened,” Pollack said. “If you have a recognizable brand, it doesn’t matter which designer it comes from. It has to be the right color, style and price. Every label has to define a niche.”

To that point, Bernardo has beefed up its machine-washable options and its Scotchguard-treated styles.

Consumer demand for versatile items is a priority for Joel Orenstein, president and ceo of Oscar by Oscar de la Renta Outerwear, which is licensed to Fleet Street. Versatility is evident in outerwear, rainwear and leather coats in the designer’s new fall collection, he said. First-year projected wholesale volume for the upper-end bridge line is $7 million to $10 million, Orenstein said.

“We feel outerwear is fashion, whether it’s in coats, categories or color,” he said.

“We don’t believe the business stops in January and February,” Orenstein said. “We plan to sustain the business by taking out the bulk.”

Woolrich is stepping up its commitment to outerwear for 2004, with the emphasis on barn coats, piles and fleece. Sportswear accounts for 85 percent of women’s apparel sales, with outerwear making up 15 percent.

Denise Bongiorno, managing director of Rodel USA, which distributes Cinzia Rocca in the U.S., said consumers are “very price conscious” compared with previous years. To try to offset that, the Italian company is trying to source fabrics from more resources, use contractors in the off season for more affordable rates and stock up on fabrics when prices drop.

Unlike previous years, shoppers are checking out different stores before making their final purchases, Bongiorno noted. Some have gone so far as to call the U.S. office to find out if and when specific styles will be marked down.

Holding price through the holidays is something Saks Fifth Avenue has done successfully with some Cinzia Rocca items this winter, Bongiorno said. She said, “It tells the customer this is a special product that doesn’t warrant any other price than the price it is.”

Fredric Stollmack, president and ceo of Weatherproof Garment Co., said the biggest change has been in women’s shopping habits. More consumers are cross-shopping in high-end stores like Bergdorf Goodman and chains like Costco, he said.

“There aren’t the biases there used to be,” he said. “People are driven by the perception of what kind of store it is through advertising and marketing.”