The Mark of Marc

From the late show starts to a must-have Louis Vuitton handbag collaboration and a new fondness for baring it all, Marc Jacobs has everyone talking. 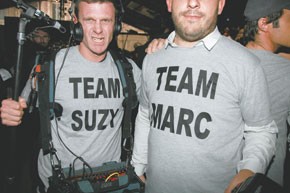 From the late show starts to a must-have Louis Vuitton handbag collaboration and a new fondness for baring it all, Marc Jacobs has everyone talking.

Now that Marc Jacobs has confirmed he will continue to show his own collection in New York — albeit on a different day — the fashion crowd can breathe a sigh of relief.

View the full coverage of  WWD Year in Fashion 2007 at www.wwd.com/yearfashion07 In early September — two days after Jacobs’ fall collection — the designer’s future in his native city seemed in serious doubt. After reading the press about his show that morning, Jacobs and his business partner, Robert Duffy, seriously mulled a move from New York’s fashion week to London or Paris. The reason for the negative press? Jacobs’ show had started just before 11 p.m., two hours after the scheduled start. The delay — far from the first for Jacobs — infuriated several editors and buyers, some of whom interpreted it as arrogance on the designer’s part. The International Herald Tribune’s Suzy Menkes, for one, flippantly told WWD, “I would like to murder him with my bare hands and never see another Marc Jacobs show as long as I live.”

While some critics hailed the clothes as among the most exciting of the season, the vituperative reactions over the delay of the show unleashed a series of events that carried through to Jacobs’ Louis Vuitton show in Paris in early October, and beyond.

There were rumors of the designer drinking or eating at the Mercer Hotel restaurant or bar while editors were waiting for the show to begin, which irked Jacobs, who had checked himself into a rehabilitation facility for drink and substance abuse in March, having relapsed after seven years of sobriety. “That is bulls–t! That is bulls–t!” he told WWD, explaining he returned to the hotel to shower and shave after three sleepless nights because he stank “like a raccoon.”

Then, while WWD and The New York Times sang Jacobs’ praises, Menkes didn’t hold back and gave his collection a damning review, calling it a “bad, sad show,” and a “freak’s costume party,” setting the stage for one of the biggest fashion feuds in recent memory. It culminated when Jacobs appeared to stick his tongue out at Menkes while taking his bow at the Louis Vuitton show, though he later said that wasn’t actually the case.

“I pulled a stupid face with my tongue out in happiness for being done with what has been a great but most stressful season for me,” he wrote on Cathy Horyn’s blog for The New York Times. “I am not stupid, childish or a vindictive person….I had prior to the show left a silly T-shirt and a nice note for Suzy on her seat. Why would I do anything to further upset her? Right after a show!!??

“Anyone who has ever been on a stage would know you can’t actually see the audience,” he added. “I made a face at no one in particular….I didn’t have a clue as to who was sitting there. Come on guys, give me a break!”

After all, in 2007, Jacobs had reached another creative peak in his 20-plus-year career.

In New York, he’d shown one of his best collections, with the striking Stefan Beckman set serving as a backdrop to a Charles Atlas film simultaneously projecting each model stepping out on giant screens in her underwear to dramatic effect. The clothes, meanwhile, played with the notion of sex and lingerie, filtered through Jacobs’ lens.

His show for Louis Vuitton in Paris may have also started over an hour late, but he more than made up for it with his After Dark-themed collection featuring handbags designed in a collaboration with artist Richard Prince. He opened the show with a lineup of 12 nurses, followed by an artistic mix of clothes and handbags, many of which featured Prince’s interpretations of the Vuitton logo, including cartoon renderings and quips taken from Henny Youngman. Fashion insiders are already predicting the collection will be another Vuitton handbag blockbuster, with the bags becoming the must-have item of the spring season.

Yet four months later, people are still talking about the hoopla surrounding Jacobs, including his delay, the feud with Menkes and his recently discovered penchant for posing in the semi-nude for such magazines as W, Out and Visionaire.

“It’s boring, it’s over,” Duffy said of the commotion after the New York show delay. “I thought it went on a little too long. It became too big of a deal. After I saw the fifth article, I thought it was ridiculous. We’re not talking about a cure for cancer. I felt bad for Suzy, bad for Marc, and I thought he was misunderstood. Everybody should let go.”

Jacobs’ and Duffy’s initial thought was to move their Collection show to Europe, a notion that sent shock waves through New York fashion. The duo decided against that tack, but opted to move their New York show from their usual Monday night slot to Friday, Feb. 8, at 7 p.m.

“People were telling us, ‘You are an American designer, stay in America,'” Duffy said. “It’s true. Hopefully, people will forgive us. And for people who really can’t stay, I will send you a DVD the next day, or I will show it to you in the showroom.”