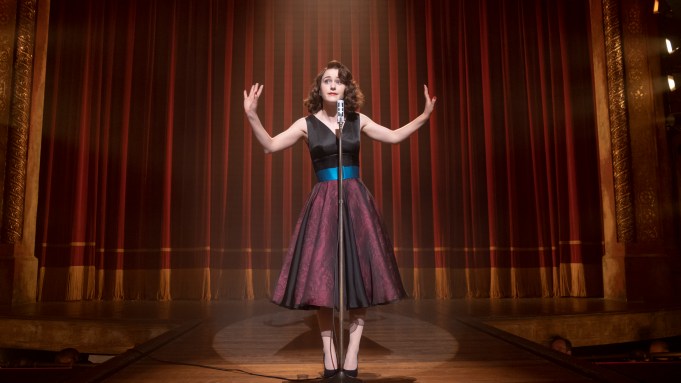 With three seasons of Amazon Prime Video’s hit comedy series, “The Marvelous Mrs. Maisel,” under her belt, costume designer Donna Zakowska had a clear idea of where she wanted to take the characters with their style for the new season.

Season four, which debuts on Friday, takes place in 1960 and 1961 as the titular character, Miriam “Midge” Maisel (played by Rachel Brosnahan), continues her career as a stand-up comedian and takes on a job that creates a rift between her and her close friends and family.

The new season’s costumes carry over many of the design elements seen in the first three seasons, with the characters dressed in bright colors, full skirts and an ample amount of accessories that were synonymous with 1950s womenswear styles. Zakowska leverages this style and marries it with styles emerging in the 1960s during a time she refers to as a “transitional period” for fashion.

“The key thing for me was to move forward in time,” Zakowska said. “To not completely do something that you knew absolutely was the 1960s and also to sort of get rid of our classic 1950s silhouette. That was the most interesting part for me because I don’t think in fashion people deal that much with transitional periods. You either feel like you’re in the 1940s, 1950s or 1960s, but there’s so many years in between all of those decades where there’s a much more interesting combination of design, shape and silhouette.”

Zakowska combined the two decades in the costumes by leveraging the sculptural and curvier silhouette of the 1950s and merging it with the “slightly boxier” looks that were emerging at the beginning of the 1960s. This was also seen through Zakowska’s use of accessories, namely hats. She explained that during this time, hats were becoming larger and more prevalent — especially bucket hats — so she introduced the accessory more into Maisel’s character.

She also stated the skirts aren’t as full as they’ve been in the previous seasons and have become more tapered. Zakowska explained that in past seasons she was inspired by Audrey Hepburn and Grace Kelly for the costumes, but moved to Catherine Deneuve and Brigitte Bardot for this season.

“I don’t think there’s such a thing as keeping to the silhouette in a true way because the minute you subject to your sense of color or proportion, in a way that’s the road map and that’s the outline for what you’re doing,” she explained on how closely she referenced the era’s style. “I think you will always inevitably add your own personal touch to it because you’re making choices. The research is there to guide you, but then your aesthetic and your sensibility is really what tells you how to interpret it because you’re always interpreting. That’s the fun part: designing the interpretation.”

“In the book I describe how I use color for emotional appeal or what I call the color echoes of different points in [Maisel’s] life,” she said. “The green being heroic, the red having more intense and passionate moments. It’s a very specific vocabulary and I, of course, create variations on that vocabulary, but it’s always a choice that in some way is going to make sense for where she is at in that point in her life and what that scene represents.”

Zakowska described Maisel’s style this season as slightly more avant garde and bohemian and inspired by the styles of fashion designer Claire McCardell. She explained that one of the more noticeable differences in the character’s style this season is with her onstage outfits. While in the past Maisel stuck to an all-black stage uniform, she’s introduced some color and brought in elements of her everyday style for this season.

“On stage we always try to create uniform and that’s why we initially began with the black dress,” she said. “But, the thing about her onstage costumes — because her whole image came out of being a housewife and mother — there was always a sense of those clothes had an evening or entertaining quality. It’s very much the way someone might dress up if they were giving a dinner party, so you have to heighten it in comparison with the other costumes and there’s a certain graphic strength because she’s in front of a curtain or in a very busy environment.”

Like many TV shows that use period costumes, Zakowska thinks the looks play their own role in the show and help further the story line.

“Sometimes people say to me, ‘I feel like the clothes themselves are characters,’ so I feel their role is to really tell the story in a simple way and then tell the story in a slightly exciting way,” she said. “Whatever the moment is or the theme is to create something that is going to enhance the action in the scene. That’s been a thing since the beginning of designing for ‘The Marvelous Mrs. Maisel’: to try to get people excited and seduced by seeing the clothes.”

It was announced on Thursday that “The Marvelous Mrs. Maisel” was renewed for a fifth season, which will be its last.

Click through the above gallery to see photos of the fashion in “The Marvelous Mrs. Maisel” season four.