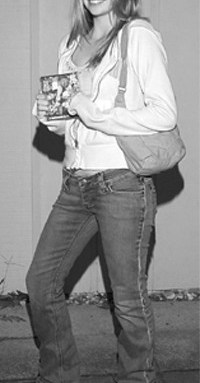 CHELMSFORD, Mass. — With money to burn and a smorgasbord of goods available at Wal-Mart, Target and Kmart, what would teenage girls buy?

In a microscale consumer experiment, WWD gave four girls, aged 13 to 18, $50 each and purchasing carte blanche to see which stores and what categories would “win” their dollars.

What emerged was a picture of how effectively the stores and product categories compete for teen attention. The big-ticket purchase of the day was a $16.99 box of L’Oréal Couleur Experte hair dye.

In a shopping day consumed with spritzing, spraying and generally wandering around the personal care departments of the major discounters, the girls voted overwhelming for the category.

They forked over a combined $92.30 on cosmetics, skin and hair care, or 46 percent of the $198.90 total spent. Add related accessories embedded in those aisles — hair clips, elastics, bobby pins — and the total rises to $103.06, or 52 percent. Home accessories trailed as the second-best performer, garnering $27.94, or 14 percent.

The beauty industry is evidently doing a good job getting its image and message out. Not only did the teens spend a majority of their time and money in the health and beauty departments, they were impressively knowledgeable about new products and brands.

To follow high school junior Jillian Harvey, 17, and high school senior Shari Gross, 18, around was to be privy to a running commentary on what was new, effective, worth the money or a rip-off.

In Wal-Mart, they rejected the company’s Simply Basic deodorant line and its tempting $1.47 price after Harvey noted, “It smells good for like three seconds and the rest of the day you smell like armpit.”

Although they couldn’t name a single mass market apparel brand, Harvey knew L’Oréal Couleur Experte was a new, two-step hair dye promising “highs and lows” in tones. It was the most expensive purchase of the day, edging out a $14.44 DVD of “Office Space” by more than $2.

What’s interesting is that despite their affinity for beauty products, Harvey and Gross insisted they’re “not Abercrombie girlie girls.” They shop predominantly at PacSun, T.J. Maxx, H&M and American Eagle for low-rise boyish cargo pants paired with fitted, zip hoodie tops. They brag about how infrequently they wash their jeans. All winter they shuffle around in Adidas rubber sport slides paired with wool socks.

Yet, it’s a studied tomboy effect, with apparent boyishness offset by waist-length hair, daily makeup and bits of silver jewelry.

They spent more money on color cosmetics than the older teens and didn’t hesitate to buy the house brand. Between them, they bought three 94-cent body sprays from Wal-Mart private label Heavenly Scents.

Brodie, an eighth-grader with a big braces-laced smile, didn’t like “pink or reds or other old-lady colors.” Instead, she favored pale browns, silvery pinks and sparkle-flecked, clear glosses.

At the Big Kmart in Tewksbury, Mass., she pounced on a $7.99 Bonne Bell lip gloss trio packed in a silver tin, which seemed like a bargain compared with the “kind of expensive” $3 to $4 individual Bonne Bell tubes.

Brodie has a basketful of lip gloss in her bathroom.

Like their older counterparts, the younger girls proselytized about their favorite beauty products, dissecting the merits of Clearasil and Neutrogena Oil-Free face washes for pimple control. (Consensus: They both work.)

In contrast to beauty, apparel fared poorly, getting only 4 percent of the total dollars.

The girls tried on only two pieces of clothing in a five-hour shopping session and mostly used the department as the shortest route between beauty and home accessories.

At the Target store in Nashua, N.H., Gross grabbed a $39.99 Mossimo puffer coat off an aisle display and pulled it on over her sweatshirt. She rejected it as too bulky. (Despite freezing temperatures and chattering teeth as they ran into the stores, none of the girls wore a coat.) Brodie admired some Mossimo zip hoodies, but at roughly $15 apiece, she “didn’t want to spend that much.”

The second piece of apparel tried on, and the only one purchased, was at Wal-Mart.

“Sometimes they have good T-shirts,” said Brodie, leading Peterson into the densely packed ladies’ wear department at the Wal-Mart here.

She quickly selected a No Boundaries cotton Henley with attached camisole for $8.87. In the try-on phase, the wispy shirt was nearly axed for showing her bra through the back, but Brodie eventually decided she could just wear a zip hoodie over it for concealment.

While waiting for Brodie to step out of the dressing room, Peterson found a pair of jersey shorts she liked until she discovered they had “Mickey” emblazoned across the butt. “As in mouse?” she asked, wrinkling her nose.

The younger teens, who wore slightly more feminine and fashionable jeans, silver jewelry and zip hoodies, said they shopped mostly with their moms at Kohl’s, Filene’s and Old Navy. Peterson said she bought a bathing suit at Target last summer after several of her friends bought similar ones.

While the younger girls seemed open to buying apparel at the mass discounters, the older girls were contemptuous of it.

The clothes are “clichéd,” Harvey complained. “They sell the same things there as everywhere else.” Gross accused the clothing of being too “fashion-y” and “trying too hard.”

The girls all received relatively modest, if any, allowances and said spending $50 in a day was a lot for them. Hence, this experiment made money relatively “no object” for them for a day. In this unreal environment, Target flourished, luring the girls with well-merchandised displays.

The girls set the trip itinerary, which started at Kmart, then went to Target and wound up at Wal-Mart. The order influenced how and where money was spent. Two of the girls, Harvey and Brodie, said they planned to hold their dollars for Wal-Mart because it was cheapest.

But after parting with a mere $7.33 at Kmart, Harvey was suckered by Target’s offering. Two scented candles, the hair dye and an Xhilaration embroidered bag, marked down to $7.84, consumed $31.81 of her remaining funds. She had less than she planned for Wal-Mart.

Asked if she would have spent differently in retrospect, her response was telling.

“No, I liked Target better today,” she said. “I like it better when it’s not my money.”

In this context, Target’s strategy to focus on improving shopper frequency seems well chosen. As long they can get the shoppers in the door, Target appears to compete well against Wal-Mart by offering a more novel and differentiated presentation.

Of the three retailers, Target was the only one whose endcap displays actually pulled the girls in. Gross grabbed a sparkly scarf off one and tied it around her waist. Harvey admired beaded door hangers in another and they both rushed at a display of $5 paper globe lanterns.

There seemed to be no compelling reason why Kmart was picked as the place to start. The girls said growing up they’d frequented several businesses in the shopping plaza where Kmart is located.

“It was just top-of-mind, I guess,” Gross shrugged.

Although it had the advantage of being the first stop, Kmart missed a couple of opportunities because of low stock. Shopping separately, both Gross and Peterson yearned for the same police light for their rooms, but couldn’t find anything other than the display model.

Whimsical Joe Boxer household accessories drew praise, but when Gross decided she wanted a fun chair for her room, an associate pointed her to stodgy, wooden kitchen chairs.

Kmart was also out of a shoe size and a lip gloss they wanted. The girls complained that Kmart seemed “old” and Wal-Mart was “dirty.”

In Wal-Mart’s case, the description seemed apt as the girls minced around a puddle of spilled goo in the personal care department and had to contend with accessories popping off the overloaded spinners. But the prices were irresistible. Brodie, who found Target appealing but generally too expensive, had $27 left for Wal-Mart.

With it, she bought a shirt, hair accessories, body mist and spray gel, a card with a set of five earrings and a silver bracelet. She took home the most items, whereas Gross, who spent the most at Kmart, ended up with the fewest number of items.

It seems likely, though, that Wal-Mart and Target’s biggest competitors aren’t each other, but Exxon Mobile, Pizza Hut and Nokia. Gas, food and cell-phone bills consumed most of the older teens’ pocket cash.