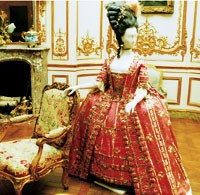 NEW YORK — Marie Antoinette’s daybed will never be the same.

With the unveiling tonight of the Metropolitan Museum of Art’s spring exhibit, “Dangerous Liaisons,” curators from the Costume Institute and the Department of European Sculpture and Decorative Arts are looking to cast a new light on the stately Wrightsman Galleries.

The Wrightsman’s pristine displays of Sèvres porcelain and elaborate marquetry commissioned by the 18th-century kings of France have normally commanded quiet awe, but now share their gilded cells with lithe mannequins done up as adulterous couples, a foppish hairdresser, an abbé who cheats at cards and a couple engaged in a sexual act on a daybed that once belonged to the woman who said “Let them eat cake.”

Yes, there’s sex at the Met.

During a tour of the exhibit as it was under construction last week, Bolton described the unprecedented approach of the show, which replaces the static mannequin installations that have traditionally defined its costume exhibits with one that tells a narrative throughout several rooms of the galleries. This is done by placing realistic figures within the context of French 18th-century settings.

With “Dangerous Liaisons,” the Met crosses several lines, introducing a sense of theatricality to a period show, and incorporating replicas of 18th-century jewelry and paraphernalia such as printed party invitations within the displays of authentic furniture and gowns. The Met administration has encouraged the occasional maverick approach of curator Harold Koda since he returned to the museum in 2000, and that also applies to the opening benefit tonight sponsored by Asprey and Condé Nast Publications which, like WWD parent Fairchild Publications, is owned by Advance Magazine Group.

“It is understood that this is a very theatrical thing to do for the Met,” said Kinmonth, who is also working on a production of “La Traviata” at the Fenice in Venice. “The idea is to push this more into the realm of theater than is customary, but the furniture and fashion are of such high quality that nothing can disparage it.”

The quality of the French period rooms — filled with the fragile neoclassical and rococo furniture created for Louis XV and Louis XVI at Versailles, the immaculate Sèvres porcelain and the wooden shop facade brought over from Ile Saint-Louis — is undeniable, although to many visitors of the Wrightsman Galleries, their function remains at an icy distance. What “Dangerous Liaisons” demonstrates with remarkable ease is how what was happening in science, culture and society was constantly reflected in furniture and fashion, with multiple layers of symbolism.

Entering the De Tessé room, a mannequin in a pink striped taffeta dress sitting on the ground reflects the striped blue gown worn by Rose Adélaïde Ducreux in a self-portrait oil painting hanging in the background, demonstrating the popularity of stripes in neoclassical dress. Rectilinear shapes are similarly seen in the room’s gilded-oak paneling, the latticework brocade of a man’s jacket and a mechanical table made in 1778 for Marie Antoinette upon the birth of her first child.

In the neighboring Cabris room, the figures are arranged to show a man watching his wife, dressed in a white linen negligee, as she is attended by a hairdresser. Danielle Grosheide, associate curator of the European Sculpture and Decorative Arts Department, pointed to the ball-shaped finials of several gilded walnut chairs, noting that they are carved to indicate the netting of a hot air balloon, as the chairs were ordered in 1784, just after the first successful experiments with hot air balloons. A system of pulleys on a dress draped across another chair was also meant to evoke the mechanical nature of the balloons, as was an oak and pine traveling table fitted with toiletry compartments and a detachable bed tray. Even the lady’s wig was styled to resemble an inflated balloon, complete with braided tendrils as netting and curls hanging below.

Other galleries show the inward curved legs of rococo furniture as a technique designed to make way for the full skirts of the period, or how the elaborate themes of chinoiserie in a desk made for Louis XV are reflected in the motif of a pagoda or leopard’s spots woven into a gown made of Chinese silk. Even the mistress of Louis XV, Madame du Barry, makes an appearance in an ivory silk dress positioned before a portrait of the king as a child by Hyacinthe Rigaud, in which the young boy appears to point out of the canvas to his future conquest.

The exhibit concludes with its most racy installation, in the mirrored Crillon room, where a woman reveals her corset and pulls up the skirt of her green-and-white striped dress in the face of a kneeling young man. While it merits a PG-13 at the least, Bolton pointed out there is no real nudity involved.

“It took so long to get dressed in the morning that the idea of getting undressed was such a bore,” Bolton said, suggesting it was easier just to hitch up the bare necessities. “One of the driving forces behind the exhibit is that you see the gowns and how they are played out in the space. We wanted to give the impression of how gowns are worn in real life.”