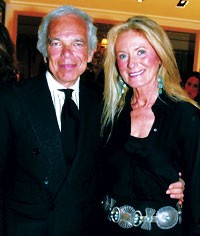 MILAN — Ralph Lauren feted his new flagship here, his first store in Italy, with a megabash last Thursday that attracted a mix of fashionistas, aristocrats, Mandy Moore and some seriously coiffed Milanese society — think Upper East Side New York ladies who are tanner, have bigger hair and more jewelry.

Guests inched their way up and down the store’s wraparound staircase as on-lookers gawked from the sidewalk of Via Montenapoleone. The store, open for two weeks, is said to be doing swift business, with sales triple expectations as Italian women snap up items like Navajo-inspired belts and estate jewelry.

“I didn’t know how much Italian women knew my brand, but they are buying,” Lauren said, emerging from a scrum of photographers and cameramen. “Milan women are beautiful.”

Still, the designer was mum on whether he’s hooked enough on Milan to show his women’s collection here, as he has in the past with his men’s line. “I don’t know yet,” mused Lauren, who came to Milan with his wife, Ricky, and sons David and Andrew after spending a few days on a yacht in the Mediterranean, including a stop in Positano. “We take one slow step and then three fast steps.”

Mandy Moore, who’s expected to put in an appearance at both the Giorgio Armani and Emporio Armani shows this week, stopped by the opening in a sleeveless beaded number. “I’m a big fan of Ralph Lauren and I was in town on vacation, heard about the party and asked if I could come,” she said.

Other guests included Margherita Missoni, Beatrice and Gaia Trussardi and aristocrat “It” girl Lavinia Borromeo, who married Fiat heir John Elkann earlier this month. True to her reserved form, Borromeo frostily declined an opportunity to comment on what she thought of the store and fled approaching reporters with her younger sister, Beatrice.

However, it appears she liked it, since she showed up the next day to try on some evening dresses for the fall party circuit.