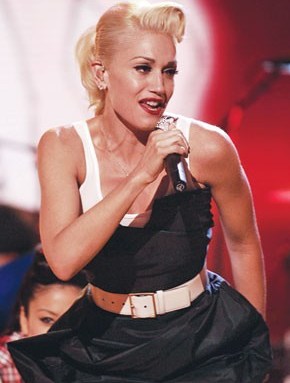 It appears that everyone wants a slice of the fashion pie, and female vocal artists are no exception. Los Angeles-based E-Poll Market Research has provided WWD with a ranking of women musicians with contemporary fashion or accessories labels by their overall appeal. The firm asked 1,100 men and women whether they were aware of the singer and, if they were, asked them to state if she was appealing. “Having a successful fashion line can only help to extend your brand, your name and your appeal to the public,” Gerry Philpott, president and chief executive officer of the firm, told WWD. “With some of these top artists, you’ll notice that many of them have a clean public image.” He also pointed out the vast age differences. “You’ve got this great mix of older and younger stars here. They all have their distinctive styles, and they are positive role models.”

1.  GWEN STEFANI
Overall appeal: 57 percent
With baby number two and a possible album with her band, No Doubt, on the way, Stefani is living the good life. Stefani also launched L.A.M.B., her own fashion line, in 2003 (which stands for Love.Angel.Music.Baby — also the name of her debut solo album). She now has a secondary line, called Harajuku Lovers. “Gwen’s a trendsetter, people want to emulate her fashion,” said Philpott of E-Poll. “People also admire the way she balances her work and her life.” WWD reported earlier this month that L.A.M.B. is adding high-end handbags to its roster. “The four-year-old firm, whose accessories are produced in partnership with Schifter + Partners, has launched a Black Label line called Aston, hitting stores this fall,” WWD said. “Gwen designs prints that push the envelope, and she does things that are so differentiated from the rest of the market,” Tim Schifter, chairman and ceo of Schifter + Partners, told WWD.

2.  MANDY MOORE
Overall appeal: 54 percent
“Mandy Moore has great potential in her career,” Philpott said. “She’s this all-American girl, she’s got the classic Hollywood looks. Fashion could take her some time, as she’s not at the top of people’s minds, but her acting and singing will surely propel her awareness down the road.” Moore launched her own fashion line in 2005, called Mblem, which features contemporary knitwear and cashmere and is sold in more than 500 specialty boutiques and department stores. Last year was busy for the singer/actress-turned-fashion designer: She appeared in two movies, “License to Wed” opposite John Krasinski and Robin Williams, and “Because I Said So,” with Diane Keaton. And last June, she released her fifth album — and first in four years — through her new label, The Firm Music, a division of EMI.

3.  BEYONCE KNOWLES
Overall appeal: 51 percent
“Beyoncé has really established herself in the entertainment business — she’s classy, stylish and one of the most glamorous on the list,” Philpott said. “She’s also managed to keep any dirty laundry out of the press.” The newlywed also increased her celebrity last week after marrying longtime boyfriend, hip-hop’s Jay-Z, in a very private ceremony in New York. In 2005, Beyoncé formed House of Deréon with her mother, Tina Knowles. The brand is named after Beyoncé’s maternal grandmother, Agnèz Deréon. House of Deréon, which features contemporary dresses, is the sister line to Deréon. Deréon includes everything from sportswear and outerwear to footwear and accessories. In addition to appearing in films such as “Dreamgirls” and “The Pink Panther,” she has released two solo albums since 2003.

4.  JENNIFER LOPEZ
Overall appeal: 47 percent
Lopez began her career as a dancer for rap videos and TV shows (including “In Living Color”), and she was a backup dancer for Janet Jackson. She took on small film roles, until gaining stardom portraying slain Latina superstar Selena Quintanilla-Pérez in the film “Selena” in 1997. She then went on to release several albums and star in movies. Lopez has three fashion lines: JLo by Jennifer Lopez (international); Sweetface, contemporary, and justsweet, young contemporary. “OK, so maybe the Bennifer thing [her romance with Ben Affleck] took her down a couple of notches a few years back, but she’s a role model for a lot of women out there,” said Philpott. Lopez, who is married to singer Marc Anthony, recently gave birth to twins, Max and Emme. “Jennifer Lopez has been great at maintaining the balance between her career and her life. She’s classy, she’s talented — plus, she’s now a mother…all these aspects will only help her career,” Philpott said.

5.  EVE
Overall appeal: 47 percent
In addition to three albums, several collaborations on hits with other artists (in 2005 she appeared on Stefani’s top 10 hit, “Rich Girl”), a handful of film appearances (2002’s “Barbershop” and “Flashbacks of a Fool,” due out this year), Philadelphia-born rapper Eve also launched her own clothing line, Fetish, in 2003. WWD reported last June that the line got off to a rocky start but was relaunched in 2007. The young contemporary sportswear collection includes leather jackets, oversize cozy sweaters, high-waisted denim jeans and skirts, leather pants, wool plaid shorts and a few logo T-shirts. “Sources close to the company said the brand should bring in about $15 million in wholesale volume in its first year at retail,” WWD noted last year. Eve plans to release her fourth album this year.

6.  HILARY DUFF
Overall appeal: 39 percent
She was first a TV and film star — then came the music. The fashion line soon followed. Duff launched her fashion and home label, Stuff by Hilary Duff, in 2004 in the U.S., Canada, Australia and New Zealand, and plans to expand into new categories and territories around the world. The brand features accessories, home furnishings and school supplies. “As a designer, I travel around the world — from London to Japan, New York to Los Angeles — to make sure my design ideas are in tune,” she said. More recently, Duff created her own fragrance in collaboration with Elizabeth Arden Inc., called “With Love…Hilary Duff.”

7.  JESSICA SIMPSON
Overall appeal: 32 percent
This Texas-born belle has had some serious career-defining moments, in addition to the several hit songs she has released. In 2003, she starred in the MTV reality show “Newlyweds: Nick & Jessica” with her then-husband, Nick Lachey. She made her film debut in 2005 as Daisy Duke in “The Dukes of Hazzard,” which came in conjunction with a number-one Billboard hit, “These Boots Were Made for Walkin’.” Simpson’s fifth solo album, “A Public Affair,” will be released Aug. 29 on Epic Records. But that’s not all — the stylish Simpson also has her own accessories line, titled Jessica Simpson, which features handbags and footwear.

8.  VICTORIA BECKHAM
Overall appeal: 27 percent
The Spice Girls had receded from view until their recent reunion and short-lived tour, but Posh Spice never left the spotlight. In fact, her high-profile marriage to soccer star David Beckham, along with her friendships with the likes of Katie Holmes have intensified public attention. In addition, Victoria Beckham has become something of a style icon, appearing in the latest Marc Jacobs ads and becoming a front-row presence at runway events around the world. In addition to her music, the mother of three has designed a line of jeans for Rock & Republic and launched her own denim brand, dVb Style. With the Spice Girls having ended their reunion in February, “Beckham will be focusing on growing her dVb fashion business, which, as reported, will extend with dresses this fall, and is said to be offering some men’s wear looks soon as well,” said WWD.

9.  PARIS HILTON
Overall appeal: 10 percent
Yes, even Paris herself can rank on a listing of musicians. Hilton founded Heiress Records, a division of Warner Bros. Records, in 2004 and released her self-titled debut album, “Paris,” under that label in 2006. The socialite-model-actress-singer became a fashion designer after helping to design a collection of purses for Japanese label Samantha Thavasa, and a jewelry line for Amazon.com. She has a handful of fragrances, including her latest, Can Can. She launched her apparel line in 2007, named Paris Hilton, which features young contemporary sportswear and lingerie, such as mesh baby-doll nighties, corsets, panties and bras.