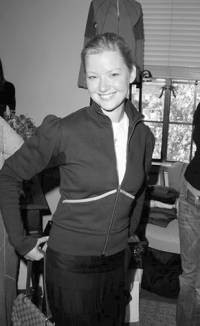 NEW YORK — Seven newcomers are jumping into the activewear zone with specialty products not likely to be found at the big brands, while chasing drastically diverse customers.

FAL Active features athletic-inspired sportswear for urban gymgoers, Dosty sweatshirts is aimed at boyish hipsters, Gallaz appeals to stylish skateboarders, Bumi Sirotka focuses on chic tennis players, Counterpoint T-shirts is for the politically minded, Raising a Racquet is constructed for fitness-minded pregnant women and Neighborhoodies is for those proud of their residences.

Instead of shooting for mass distribution, these brands are being highly selective in terms of where their labels are offered. Should that strategy work, they will broaden into new categories.

FAL Active was launched in November exclusively at Equinox Energywear stores. During an interview at the firm’s Seventh Avenue showroom, designer Jeffrey Grub said he had long wanted to design something for his friend, Fran Errico, who runs Energywear stores, a 13-unit operation known for its mix of versatile activewear and contemporary sportswear.

“She sets the pace for gym boutiques,” he said. “She mixes in contemporary T-shirts with activewear. She is ahead of trends. We feel the Equinox customer has the same aesthetic as our designer customer. They like a little bit of fun, but they’re pretty sophisticated.”

Grub befriended Errico and her sister, Terry, in the early Nineties, when “gym retail consisted of selling padlocks and sports bras on wire forms.” His new line has a hoodie; yoga pants; a short-sleeve, zip-front top with a pocket; capri pants; dance pants, and bra tops — with everything retailing for less than $100. This year, FAL Active will also be offered to other specialty stores including units in luxury spas. The company expects to generate $5 million in wholesale volume this year.

Legwear designer Dorothy Lanier is now offering fleece pieces and zip-front jackets under her Dosty label and will continue to offer legwarmers. This year, Dosty apparel sales are expected to double to $1 million with the new group, said Eileen Ward, president of the Prophet showroom, which reps the line.

“I knew I needed to move into the next thing. I don’t want to design socks for the rest of my life, obviously,” Lanier said. “I think it is better to do one thing, do it right and people will know what to come to you for.”

To create some buzz around the fleece jackets last year, Lanier went to Los Angeles for a pre-Emmy party to give away samples to stylists, fashion editors and rising stars like Gretchen Mol. Her 12-style collection wholesales from $45 to $60 and is offered at better specialty stores such as Barneys New York and Fred Segal Flair.

In November, Gallaz, a women’s skateboard shoe company, showed off its new skateboard-inspired apparel here at Idlewild, a downtown bar designed to look like the interior of an airplane, an appropriate ambiance since the bar was named for the former moniker of John F. Kennedy International Airport.

Aimed at girls and women between the ages of 12 and 24, Gallaz apparel has unfinished touches, like raw edges, burned-out logos, reversible prints and scissor-cut necklines, to appeal to women who like to customize their clothes. Each item retails for $50 or less and ships to skateboard and surf specialty stores beginning this month. First-year projected wholesale volume is less than $2 million.

Bumi Sirotka, a Wilhelmina model and former designer store saleswoman, launched a 25-piece tennis line last spring. Her brand got a lift last summer after Lauren Bush was photographed between sets in the Hamptons wearing one of Sirotka’s outfits with the signature pineapple logo. The shot appeared in various publications, including Gotham, Tennis Week and Avenue.

Sold at pro shops at resorts like The Breakers, the Atlantis Club on Paradise Island, the collection includes pleated skirts, racer-back tops and stretch A-line skirts. Wholesale prices range from $22 for a V-neck top to $50 for a tennis dress.

First-year projected wholesale volume is $400,000, Sirotka said. She makes a point of visiting the clubs she sells and is using trunk shows as a way to get to know her customers better. Her aim is to offer sophisticated tenniswear with a dash of fashion.

Sirotka now plans to develop a children’s line to be launched later this year, since many stores have requested one.

Paul Gnu, founder of Counterpoint, used last month’s first Hip-Hop Film Festival to drum up interest in his activewear, imprinted with such messages as “Mothers Need Sons Not Killed by Guns” and “Phone Tap.” Sales of women’s apparel are expected to account for 10 percent of Counterpoint’s volume this year. The brand aims to sell a few hundred units of the women’s apparel in the next 12 months.

The 10-year-old Brooklyn-based company is offering more women’s T-shirts and tops like a baby T-shirt imprinted with “Lo-res Revolution” and an image of Huey P. Newton, Mao Tse-Tung and Malcom X on the front and an Atari-type logo on the back.

In the past, the company bought children’s T-shirts for its women’s line and had to cut the necklines and armbands to fit the adults.

Raising a Racquet is another eclectic label that will be sold to such specialty stores as Pickles and Ice Cream, a maternity chain with headquarters in Atlanta. Rebecca Cutler and Jennifer Krane, two Darien, Conn., neighbors who left their legal careers to raise children, started Raising a Racquet, which shipped last month to specialty stores in 25 states.

Raising a Racquet’s kit consists of a fuchsia hatbox with a reversible skirt, V-neck polo shirt, a sleeveless V-neck shell and black athletic shorts, with a suggested retail price of $132. Cutler and Krane said they aim to sell 5,000 kits in the first year.

In a phone interview, they said they also wanted to promote the importance of exercise during pregnancy. Next up: a Raising a Racquet golf kit to be unveiled within the next six months.

For the first time, Neighborhoodies is looking to broaden its distribution beyond its online store. The Brooklyn-based company started off in an unlikely way. So many people complimented company founder Michael de Zayas about his self-made Fort Greene sweatshirt that he started making for friends, carrying the names of their respective neighborhoods.

Interest was so strong this fall that he gave up his copy editing job to set up Neighborhoodies.com, an online store, and to devote all his time to the company. The company expects to sell at least 5,000 units in the next year. With the exception of a small ad in a December issue of The New Yorker, all advertising has been word-of-mouth. San Francisco, Los Angeles, Seattle, Philadelphia and Washington are among the cities being targeted in January and February.

Visitors to Neighborhoodies.com can choose from neighborhoods surrounding 14 cities for their $49 sweatshirts or customize their own. But the names are open to interpretation, as evidenced by the Boston section, which includes “Big Dig” and “Brahmin Boston.” The first refers to the $14.6 billion project by the Massachusetts Turnpike Authority and the second references the nickname Oliver Wendell Holmes bestowed on 19th-century bluebloods.

Regardless of the moniker, Neighborhoodies sweatshirts are offered in three different colors with 11 different letter colors. Each of the four styles has a money-back guarantee. If all goes according to plan, de Zayas said he won’t ever have to go back to another desk job.