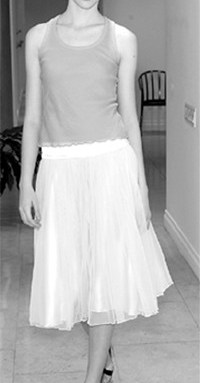 Born in Vancouver and raised in Los Angeles, Jarmon moved to Paris to study fashion design and never came back. After meeting her husband there, Jarmon seemed settled and it was there she would begin her signature label of contemporary clothing. Ten years later, she is entering the North American market with the help of Pacific Connections Apparel, which now distributes the brand throughout the U.S. and Canada.

“Tara interprets the trends in her own way and I think that is her appeal,” said Jason Tynan, president of Tara Jarmon in North America. “She loves Theory, but also knows that there is no need for another Theory in the market. Her clothes are about novelty, about that special piece in a wardrobe.”

Starting with a test, selling only a small selection of the fall line in Bloomingdale’s, Saks Fifth Avenue and Bergdorf Goodman, Tynan is planning a major debut of the brand for spring retailing. The line consists of sportswear with details such as satin halter tops in colors like orange, yellow and green with built-in matching necklaces, short cotton jackets with bows in matching colors and a pleated white, orange and green circle skirt.

With an average wholesale price of about $100, Tynan said he expects to reach between $15 million and $18 million within the first full year at retail.

‘Tara’s presence throughout Europe is incredible,” Tynan said. “She has about 30 freestanding stores of her own and more than 11,000 shop-in-shops in department stores, so it’s natural for her to come to the U.S. at this point. She is established there — now it’s time she came here.”

“We got into the show the last minute, so we had a pretty small space,” he said. “I couldn’t believe how busy we were the entire time. It was then I knew that we had something new to offer this market.”

Besides concentrating on the launch of the brand in the U.S. and Canada, Tynan said he is negotiating for spaces in New York’s Upper East Side and in Los Angeles to open stores. He also is working on a deal to distribute the brand in China. He hopes to see the Tara Jarmon brand turn into a full lifestyle of products and an accessories deal is in the works.

“That is the goal,” he said. “To have jeans, outerwear and accessories would be great. It just takes time.”

The brand has been testing well for the past year in stores like Saks Fifth Avenue and Neiman Marcus, and now Azrouel has set a major launch for spring.

“I feel this is something the contemporary market needs,” he said of the line, which has grown from 18 pieces to the 40 pieces it is now, “a designer-level product at a contemporary price point.”

Donata Minelli, director of the brand, said, “Retailers were asking for a line like this from Yigal for quite some time.”

The result of these retailer demands is a full line of contemporary clothes made for what he said is a “young but sophisticated customer.”

With a wholesale range between $92 and $130, some key pieces include a matte jersey floral-print halter dress, silk chiffon printed tops and a black jersey skirt with matching chiffon details. Azrouel said he feels free to design sexy, colorful clothes with the Y Yigal line, since the customer is more daring than his traditional rtw customer.

“This line can be a bit more fun and colorful,” he said. “I can experiment more with the designs.”

While the company operates a store downtown here, Minelli said it does not plan to sell the Y Yigal line in that store. The store will stay high end and Y Yigal is reserved for wholesaling to high-end specialty retailers.

She said a shoe and handbag collection will come and will be done in-house for better control. Also in the works are plans to move into a larger showroom and factory space within the next month. The company will move from a 7,000-square-foot space into one more than double that size.

Also, she plans to introduce the line to Japan, as the contemporary market continues to boom there and it is already known through the rtw.

“Japan should be a really easy launch,” she said. “We do so well there already.”

Minelli said the Y Yigal line brought in $3 million in sales in the first year. She plans to reach $6 million in the second year.

It’s been six years since Wang launched her line of contemporary dresses and now she is taking the next step in growing her brand with the debut of a sportswear line called Stripe.

While she has become well known to the contemporary crowd as much for her dresses as for her self-designed, feminine prints, Wang has decided to move her sportswear collection into an entirely new direction. Instead of continuing her prints, she has designed the line around something simpler —stripes.

“Stripes are classics, something that never goes out of style and, in one way or another, everyone wears them,” she said. “And, as a designer, I was looking for a new challenge. It’s challenging to constantly design a collection around stripes.”

Ready for spring retailing, the first line of Stripe was inspired by men’s wear fabrics, as in a brown cotton blazer with subtle stripes woven into the fabric with matching capri pants or a miniskirt. Wang also is offering a few sundresses, such as a brown-and-white-striped A-line dress, or a loose-fitting top made in the same print. Almost every piece is lined in a polkadot print that works with a few pieces, such as a skirt with brown ribbon detailing.

“I really believe in loose-fitting but still flattering clothes for the spring,” she said. “I’m also thinking about what the customer would wear these pieces with if she doesn’t want to match it so closely, so the tops are very jeans friendly. They have to be jeans friendly these days.”

Wang said the Stripe line has a slightly harder look than the dress collection, but since she has become known for her prints, she was looking to create a more casual line with a look completely separate from Helen Wang. She said she will not treat this as a secondary line, but rather a whole new division within the company.

Next, Wang said she hopes to launch a small line of shoes and handbags to compliment each line, which she plans to design in-house.