Despite Californians’ appetite for shopping, not all retailers will meet with success when they head west. 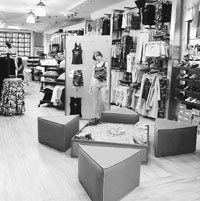 California just may lead the pack in a nation obsessed with conspicuous consumption. It’s a shopper’s paradise and, as such, a kind of retail utopia. But what differentiates the region now goes far beyond the fact that its residents wear spring merchandise year-round. The present challenge is to navigate a market that’s becoming as diverse as California’s geographical terrain.

Retailers can’t help but be enticed. After all, this is where mall culture has inspired pop songs and created “Valley” speak. This is where cars say as much about drivers as the jobs they’re driving to, and where how you look takes precedence over just about everything else.

Material excess is not just confined to the luxury set, either. A recent Saturday visit to Brea Mall in the heart of the middle-class suburb of Brea, on the inland edge of Orange County, revealed cars crammed in the parking lot on a so-called “slow January day.” It’s a typical scene repeated many times over in other mall parking lots around the state.

Statistics paint an impressive picture of the fifth-largest economy in the world and the largest single retail destination in the country. Consumers in the state spend $300 billion per year on everything from Lamborginis to lariats. For every person, there is 21 square feet of retail space, putting California way ahead of New York’s 13.5 per capita ratio, according to the National Research Bureau. Although the East and West Coasts account for only 10 percent of the U.S. geography, combined they are responsible for 25 percent of the nation’s retail sales, according to The NPD Group’s research. And whether it’s due to Hollywood or the down-dressed California lifestyle, the state may just beat the East Coast in its influence on Middle America, noted Cohen.

No wonder retailers have maintained their quest for westward expansion, as evidenced by Wal-Mart’s plan for 40 supercenters in California within the next three to five years, and Kohl’s 28 full-line stores that bowed in Southern California in March 2003.

The short answer may be that California is a retail destination riddled with idiosyncrasies, including ethnic demands, sophisticated taste levels and varied economic wherewithal. Such diverse identities are becoming more and more challenging to crack.

For starters, California’s economy can be told as a tale of two regions. For some time now, local economists have been bullish on Southern California. It is considered one of the largest and most competitive retail markets in the nation, with $140 billion in taxable retail sales in 2002 — expected to grow to $170 billion by 2005. Population, chugging along at an increase of 330,000 people per year, should hit 18 million by 2005.

The region can only benefit from the expected growths in the aerospace and tech sectors this year from President Bush’s recently unveiled plans for a moon-to-Mars mission, said analysts. San Diego’s gross regional product should grow a strong 6 percent next year from increased military spending and healthy employment projections, according to local economists.

In Northern California, economists paint a bleaker picture. The region has still not fully recovered from the tech fallout of the late Nineties and, even as the sector itself is rebounding, consumers are still smarting from the downturn and remain cautious with spending.

“Retailing still isn’t doing all that well,” said Howard Roth, chief economist at the California Department of Finance in Sacramento. “Maybe it’s up a little bit from a year ago, but it’s still pretty tough in Northern California. At least job losses have slowed down, and that’s a major improvement.”

In the Central Valley, home to one of the world’s largest locations for food production and processing, the nation’s largest dairy region and the largest oil-producing region in the country, the area is still vulnerable to layoffs.

Meanwhile, California overall is in a period of turmoil as consumers increasingly are torn between wanting value and a desire for high-end merchandise. As the LAEDC’s retail profile points out, “Consumers now want more bang for their buck and they don’t see that much value in many of the middle-range stores. They find that many discount chains have moved up the quality ladder and offer fashionable items at great prices.”

That has left the mid-level Kohl’s — which bet its easy-to-shop store layout, convenient locations and competitive pricing would be a hit in the region — in a quandary. By offering bilingual sales associates and in-store signage, it zeroed in on California’s large Hispanic population in an effort to reflect Kohl’s focus on family and brand names. But reception here has fallen flat. For the 39 weeks ended Nov. 1, 2003, the company’s net income fell 6 percent to $344 million — partially due to a tepid response in the West — on overall sales, which rose 13 percent to $6.72 billion.

Kohl’s may have put pressure on Mervyn’s, another mid-level retailer with 124 stores in the state, but it in no way unseated the Hayward-based chain — as many analysts had predicted.

“The conclusion is that it’s not that easy to take a cookie-cutter formula and drop it in California and make it,” said Kyser. “A store is not going to just come into that region and all of a sudden take it by storm.”

Californians certainly haven’t unfurled the welcome mat for Wal-Mart and its intended supercenter building spree. The Bentonville, Ark., retailer has met with heated political battles from Palm Desert to Contra Costa County. These city governments, including Los Angeles, have passed ordinances that would prohibit the construction of retailers over 100,000 square feet in size with more than 10 percent devoted to nontaxable grocery sales. Although the ordinances do not single out Wal-Mart specifically, it’s clear the retailer is the primary target.

Critics have accused the retailer of creating blight, traffic and environmental hazards and keeping the working classes down. Wal-Mart has vowed to fight these bans and in some cases has been successful in other U.S. cities, overturning them by bringing the decision directly to voters.

Analysts said it is hard to predict whether voters will step up to the plate. “A consumer is not going to notice whether a supercenter exists or doesn’t exist,” said Adrienne Tennant, a senior analyst for Wedbush Morgan Securities. “There are other mass retail options.”

The same goes for shopping malls. California already leads the country with gross leasable mall area of 725.3 million square feet, according to the International Council of Shopping Centers, and many are getting major makeovers to stay competitive. By contrast, Florida’s mall space is 460.7 million.

As traditional retail malls lose their luster, there’s an even more urgent quest on the part of developers and retailers to search for viable retail concepts. Some developments, such as Paseo Colorado in Pasadena and Santana Row in San Jose, are trying their hand at innovative mixed-use projects that meld retail with residential units, but the reviews on the part of consumers have varied.

With so many malls housing so many of the same stores, many shoppers think shopping is less fun than it used to be. As a result, retail developments that offer an experience are drawing huge crowds. The outdoor mall The Grove in Los Angeles, designed by a former Disney “Imagineer” and located next to the historic and tourist-friendly Farmers Market, has proven experience is everything.

Meanwhile, California’s success stories continue to be those retailers that cater to niche markets. Anaheim-based PacSun has successfully connected with surf and skate consumers. For the first 11 months of the fiscal year 2003, the chain reported same-store sales that rose 13.2 percent while total sales were up 22.8 percent, to $985.8 million from $802.7 million. Hot Topic, which delivers music-influenced goods to teens, also saw total sales in its fourth quarter jump 32 percent to $115.7 million from $87.4 million a year earlier.

“Niche retailers are doing well because they offer something different and successfully articulate their message to the customer,” said Elizabeth Pierce, an analyst with Sanders Morris Harris.

But some junior retailers here continue to take a beating, with executives blaming waning mall traffic and an absence of strong fashion trends. Foothill Ranch-based Wet Seal is one of the worst off. In early January, the teen retailer announced it would sell off or close 31 of its tween-targeted Zutopia stores and, if no buyer is found, would close the stores by the end of the first quarter of fiscal year 2004. Wet Seal has been battling less-than-stellar sales caused by fashion and merchandising missteps, a trend that is plaguing other teen retailers like Charlotte Russe and Rampage.

Another sector holding up well in the state is the luxury market. Three main areas — South Coast Plaza in Costa Mesa, Rodeo Drive in Beverly Hills and Union Square in San Francisco — are consistently racking up sales of $1 billion per year.

“Ka-ching, Ka-ching,” said Linda Mjellem, executive director of the Union Square Association in San Francisco. “I think that from what I can tell, the luxury market really held up well here over the holidays, and that’s not true across the board with retail in general in the San Francisco area.”

Small specialty stores that cater to the affluent contemporary consumer urban markets, such as L.A. institutions Ron Herman-Fred Segal Melrose, Maxfield and Madison, have also reported strength. During the holidays, many said consumers were spending an average of 25 percent more than they did a year earlier, and big-ticket items, such as $350 embellished Ugg boots, were de rigueur.

In the year ahead, economists are bullish both on the nation’s recovery that will uplift California and the state itself pulling out of the doldrums, a $15 billion budget deficit notwithstanding. There is hope for Gov. Arnold Schwarzenegger’s drive to get businesses back. In his state of the state address in early January, Schwarzenegger called himself “California’s Job Czar.”

“I’m going to travel the nation and the world to find those jobs,” he said. “I’m going to say, ‘Come to California. Come and do business here. Buy our fantastic products. Visit our special attractions and hire our workers, who are the most productive in the world.’”

But even with new vigor, analysts warn retailers not to take a blanket approach to retailing in California. “There’s not one pure simple solution,” said Pierce. “I don’t think we as a population are that homogenized. You have to look at your surroundings, look where you’re pulling from and figure out what your competition is. You have to ask yourself, ‘What other choices there are and how you can compete and add value?’”

The rewards could be golden.