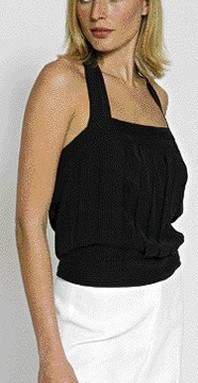 NEW YORK — It’s not exactly an auspicious moment to make his debut at Anne Klein, but Michael Smaldone is taking on the collection with the spirit of the house’s historic logo, a roaring lion.

While the label’s parent company, Kasper ASL, is about to be put up for auction in bankruptcy court, most likely pointing toward new ownership and bosses for Smaldone, the designer said any anxieties about the future of the business have only furthered the spirit of creativity.

Anne Klein’s spring collection is the first by Smaldone that will debut on a runway in September, following the resignation of Charles Nolan in April to pursue a career in politics. The resort collection he opened last week offered a preview of the changes in-store, showing that Smaldone plans to introduce a softer, more feminine and more international approach than its most recent incarnation.

“This was a surprise to everybody,” said Smaldone, 38, who designed for Banana Republic and Tahari before being hired last year to take on the better-priced AK Anne Klein collection. “It gave me a great opportunity that I never really had thought about before. I’m living a dream.”

In putting together his debut for the signature bridge line, Smaldone looked at the 1930s, focusing on Jacques-Henri Lartigue’s sepia-toned photographs of beach resorts and bronzed women that evoke a deep, lush feeling.

“There was sort of a polished ease and spirit to that era, which seemed right for the direction we’re going,” Smaldone said. “Our customer is womanly and sexy. She really likes the paradox between soft versus very tailored pieces. We brought back draped and wrapped pieces, which are compared to more tailored, utilitarian suiting pieces. And the colors are very graphic in nature, so it still has a strength to it that is very French Riviera.”

Smaldone has spent much of his career in the bridge market, an area that appeals to him for its focus on the realities of working women, so the promotion to vice president and chief design officer offered him the opportunity to create an approachable collection bearing one of the strongest brand names in American sportswear. As Anne Klein is also a name that’s been in the news lately, Smaldone said the fate of the company does occupy a place in the back of his mind.

As he tells his design staff, however, “It’s exciting, because change is always great,” he said. “The company’s only going to get stronger because it’s going to become more focused and closer to the customer for each individual brand within Kasper.”